The Current State of North Korea’s Satellite and Missile Facilities 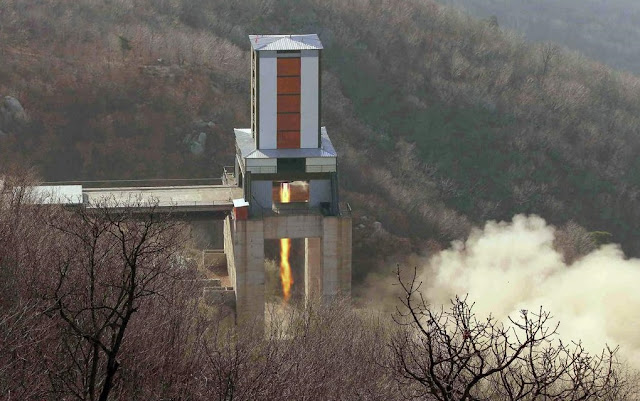 Over the decades, North Korea has decentralized its satellite and missile launching facilities across its territory. One obvious benefit to this is security but it is done at the cost of efficiency. The more facilities one has, the more resources are necessary to maintain and upgrade them. It may even become necessary to neglect or demolish a site in favor of improving more important ones. Pyongyang seems to have learned this lesson and placed some sites in caretaker status, demolished others, and concentrated resources to support their core infrastructure.

In this article, I will examine the current state of the country’s launch and testing facilities and detail a few important changes that have happened under Kim Jong Un, who has overseen a greater number of missile tests than his predecessors combined.

While North Korea has a history of launching missiles from a range of locations (factories, airfields, and even along highways), the country does have a robust set of dedicated launching and testing facilities.
Currently, the country has two satellite launch sites, three rocket engine test facilities, a general launch facility, and two former sites that have been decommissioned in recent years. Within Pyongyang, two known tracking and control centers also exist.

While all countries have the right to peaceful space exploration, the development of rocket engines to carry satellites or astronauts necessitates the development of ballistic technology. Indeed, this has been a concern of other nations regarding the development of private space exploration. North Korea’s official protests that their space program is solely peaceful have never been taken seriously by the West and even their own propaganda has occasionally betrayed the rouse. Most recently, the purpose of the December 2019 engine tests at the Sohae Satellite Launch Station have been described by state media as “bolstering up the reliable strategic nuclear deterrent of the Democratic People’s Republic of Korea”. 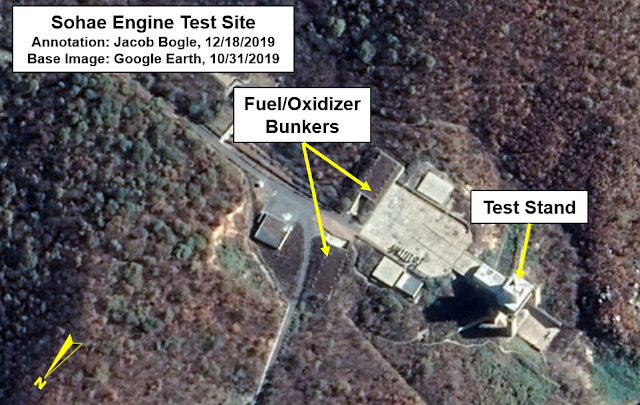 Located on the western seaboard, initial construction activity at Sohae (also known as Tongch'ang) was first noticed in the early 1990s and was largely completed by 2011. The first test occurred on April 13, 2012, with the failed launch of the Kwangmyŏngsŏng-3 earth observation satellite.
Improvements to the site continued to be made over the years including new administrative and observation facilities, an upgraded rail station, and even the establishment of an outer perimeter fence that encompasses the original complex and its inner perimeter. In terms of recent activity, there are three primary examples.

The first occurred in 2018. As a result of the first US-DPRK summit that was held in Singapore, North Korea began dismantling key structures. However, rapprochement didn’t last long and in March 2019 the second change happened, the launch pad structures began to be rebuilt. The third change came with the end of 2019 and underlined the continued importance of Sohae, as two rocket engine tests were carried out.

The county’s second satellite launch station, on the other hand, has largely remained in caretaker status since 2013.

Tonghae Satellite Launch Station (also known as Musudan-ri) is in North Hamgyong Province along the east coast. Considerably smaller, Tonghae’s construction started in the 1980s and was originally used in the development of early generation Scud missiles. In 1998, North Korea claimed to have launched a Kwangmyŏngsŏng-1 satellite from Tonghae, however, no orbital object was ever located or tracked by outside observers.

Another failed satellite launch attempt happened in 2009. In 2012, one of the last major additions to the site was constructed. The site, which has yet to be positively identified, is either a test facility or possible missile silo. However, despite initial progress, it was never completed. The most recent Google Earth imagery shows that it may actually be in the process of demolition.
Much of the trench covering has been removed and the control building has been torn down. 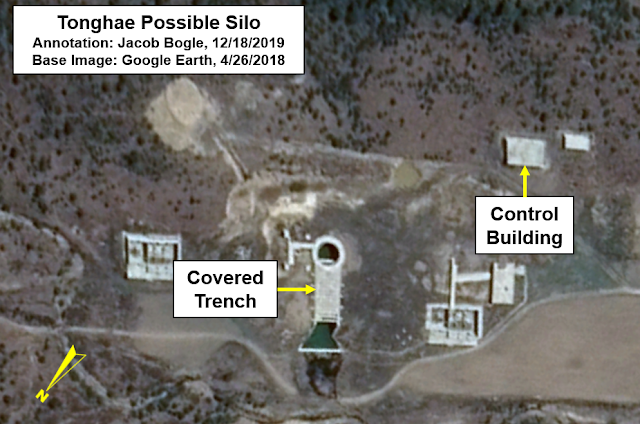 In May 2018, the trench covering was visible, and the control building was still standing |Photo: Google Earth 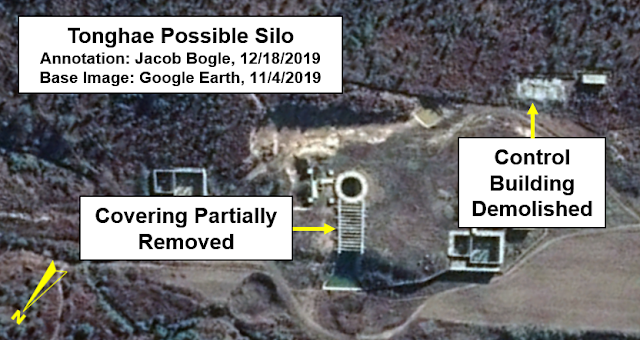 By November 2019, the covering had been partially removed and the control building demolished |Photo: Google Earth

Tonghae’s launch pad appears to be abandoned and is overgrown, while activity at the engine test stand and assembly building remains minimal. In fact, the grounds of the assembly building have been used for crop harvesting activities.

The original launch control building, tracking station, and the “new” control building (construction finished ca. 2015) have all seen little activity and signs of minor disrepair are visible. The Horizontal Processing Building has never been completed, despite construction starting in 2012.
Tonghae’s situation may be the result of the regime’s focus on launching satellites at Sohae with its superior facilities, testing missiles on mobile platforms, and keeping engine test stands near other required infrastructure, whereas Tonghae sits miles away from manufacturing and fuel production facilities. Tonghae’s future use seems rather bleak.

Beyond the engine testing facilities within both satellite stations are three additional test sites: at the Tae-sung missile factory (Pyongyang), the Magunpo solid-fuel engine test site (near Hamhung), and the Sinpo engine test site. 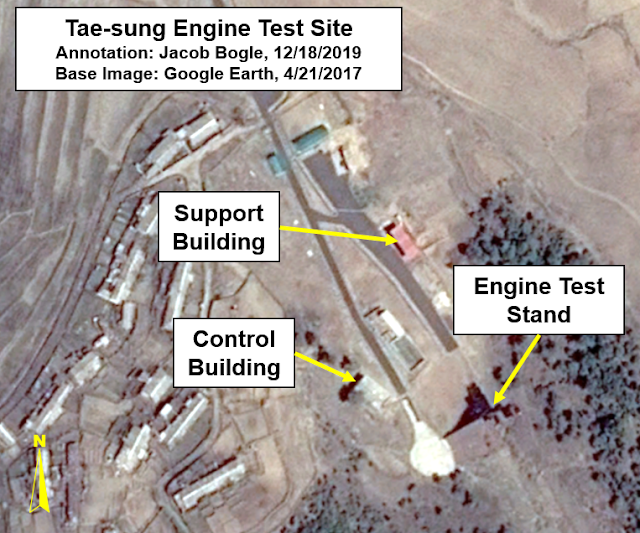 The vertical test stand at Tae-sung (also called Chamjin) is located within the Tae-sung Missile Factory complex in Chollima, Pyongyang. Though the fairly rudimentary site can test engines for Scud and Nodong missiles, it underwent a period of general inactivity from 2006 to 2016. In 2016 the facilities were modernized, and a nose cone test was carried out. This suggests that testing larger engines may no longer be feasible (or necessary as other purpose-built sites exist) but that the site can still play a role in developing other aspects of ballistic missile technology. 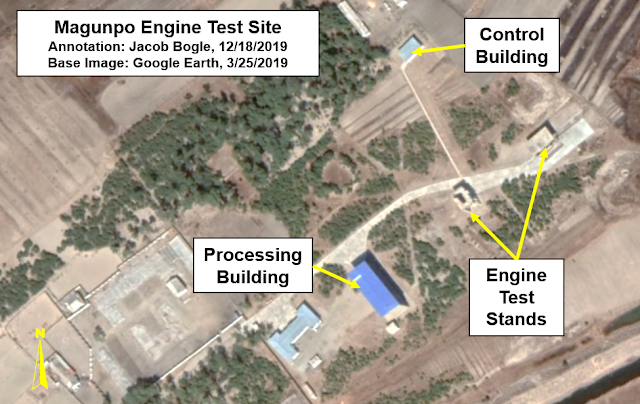 Magunpo is one of North Korea’s newest testing sites (along with Sinpo). Vertical and horizontal test stands were constructed between 2013 and 2014. It also lies a mere 3 km from the No. 17 Explosives Factory in Hungnam where solid rocket propellant is produced. Since its construction, multiple tests have been carried out (as well as the launching of several missiles from the nearby Yongpo airfield to the southwest). Magunpo remains an important cog in North Korea’s missile program as it is currently the largest such site in the country. 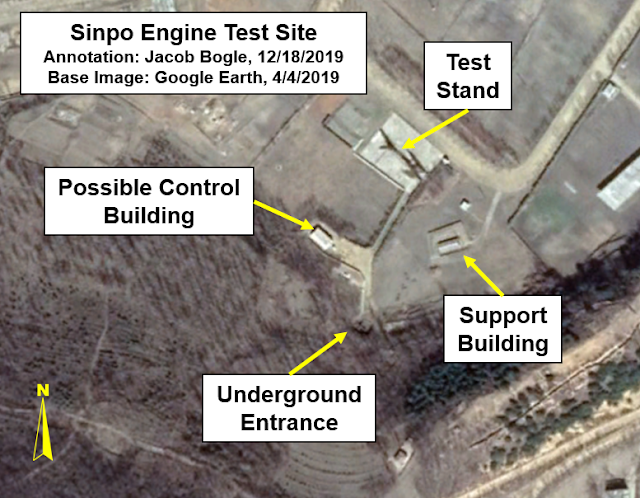 Within the city of Sinpo and including the nearby Mayang Island lies a key submarine base and is where most of the development of submarine launched ballistic missiles (SLBM) occurs. Initial work on the land-based test stand began in 2012 and supports “both the development of the Pukguksong-1 (KN-11) SLBM and SINPO-class SSBA’s missile launch systems,” according to Joseph Bermudez. There have been several “ejection tests” at the site as well as tests carried out on sea-based, submersible barges. The most recent barge-based test was of the Pukguksong-3 (KN-28) which was conducted on October 2, 2019.

Work at the submarine base has been ongoing and, according to 38 North, the use of Synthetic Aperture Radar (SAR) "revealed the presence of the North Korean SINPO-class experimental ballistic missile submarine (SSBA) and its submersible test stand barge positioned beneath a recently constructed, dockside awning designed to conceal and environmentally protect these vessels.”
This is strong evidence that the development of SLBMs is a primary focus of the regime. 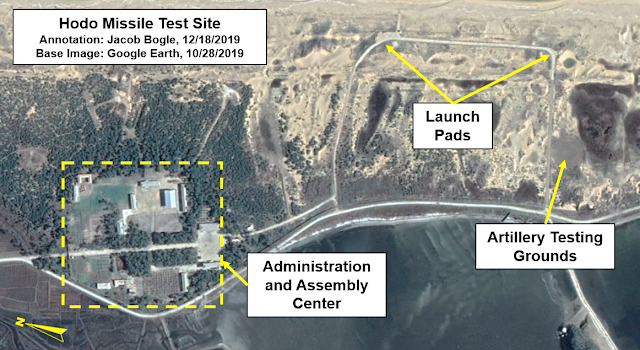 The Hodo Launch Site is a dedicated missile launch facility that lies on the Hodo Peninsula, north of Wonsan. The area has been used for artillery training since the 1960s but within this decade the training area has been increasingly used for long-range artillery and ballistic missile testing. Concrete launch pads, a dock, and other support buildings were constructed beginning in 2014.

Two launch pads were constructed at the relatively close-by Wonsan-Kalma International Airport in 2016 and several tests were carried out there, however, the subsequent construction of resorts and hotels along the same beach meant that those launch sites were demolished. Since then, activity at Hodo has greatly increased with several tests happening in 2019 including a test on May 4, 2019 and two short-range missile tests occurring in July.

The first decommissioned launch site in recent history was the aforementioned site at Wonsan. Those two pads were the location of several high-profile launches including a Hwasong-10 launch which Kim Jong Un himself oversaw. The extremely basic facility was demolished for expediency as Wonsan was about to undergo an enormous construction project to build beach resorts. The upgraded facilities at nearby Hodo also meant that Wonsan became redundant. 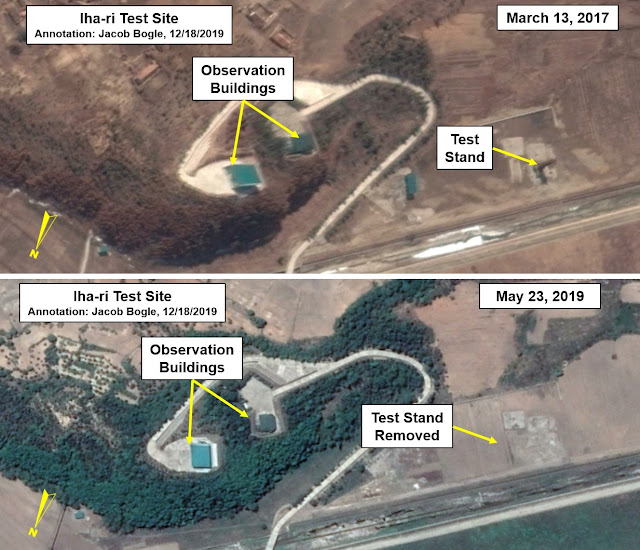 A comparison image showing the Iha-ri driver’s facility with the test stand visible in 2017 and in 2019 after its demolition |Photo: Google Earth

Perhaps the most significant change happened at the Iha-ri military driver training base in North Pyongan Province. Between 2016 and 2017 a vertical engine test stand was constructed at the base. It was only used once, as a canister-launched ballistic missile ejection test for the Pukguksong-2 (KN-15) before being demolished in mid-2018 as part of Kim Jong Un’s April 2018 announcement that they would suspend future ballistic missile tests. The base has since been returned to its original purpose.

Pyongyang is host to the country’s central missile and satellite control centers.

The General Rocket Control Center is located within the Second Academy of Natural Sciences (also known as the Academy of Defense Science or the Sanum-dong missile factory) in northern Pyongyang. It is responsible for tracking and other activities related to the testing of ballistic missiles and was constructed sometime between 2001 and 2005. The facility has remained largely unchanged except for a new hexagonal building that was constructed in 2016. The Academy lies adjacent to the Kim Jong Un National Defense University which also plays a role in the development of missile technology.

The General Satellite Control Center is the control center of the National Aerospace Development Administration. The modern-looking complex was constructed near central Pyongyang along the Pothong River between 2014-2015. It handles satellite launches and tracking. An expansion of the facility began in 2017 with multiple large buildings being added to the complex. Construction at the site has carried on well into 2019. The exact purpose of these new buildings is unknown, but it is possible that they may be research facilities and will also provide museum space.

While some facilities may have been shuttered or demolished, the core of North Korea’s testing infrastructure and their ability to research and to construct missiles and launch vehicles remain undiminished. Pyongyang’s insistence that the recent Sohae tests were part of their nuclear deterrence, and their ongoing work toward developing SLBMs at their Sinpo facilities, clearly demonstrate the regime’s intentions. The question becomes, will the international community listen to what North Korea is broadcasting with the current state of their testing facilities?