Work on Major Hovercraft Base Advances

I recently wrote about an ongoing trend under Kim Jong Un to vastly overhaul every branch of the country's military, and this, of course, includes the construction of new naval bases and the redeployment of equipment.

High-speed hovercraft play a key role in North Korea's special operations forces (SOF). Beginning in the 1980s, the Korean People's Navy (KPN) started slowly improving its capabilities to quickly attack or infiltrate South Korean targets and by the mid-1990s their hovercraft inventory reached ~140 craft (a number which has largely remained stable over the years). While the KPN’s inventory may have remained somewhat stable, a number of new naval bases and related facilities have been under construction (or expansion) since Kim Jong Un came to power. One such base is near the small village of Yonbong-ni (37.9071°, 125.2242°).


Starting around March 2014 constructed began on this new hovercraft base. The Yonbong-ni facility compliments two others that were completed ca. 2012-2013. However, Yonbong-ni (once completed) will be much larger than the other two and, at 22 miles from the Northern Limit Line, will also be the most forward-deployed hovercraft base and one of the most forward-deployed naval bases North Korea has. (There is a small naval facility on Sunwi Island which lies 11 km from the NLL.)

The first indication of the base's construction was the placement of a small earthen dam across an inlet to moderate the flow of water into the bay from the mainland. I'd like to note that while the base's location may seem fairly remote, from the dam, it is less than 2 km away from a long-standing patrol boat station to the west. 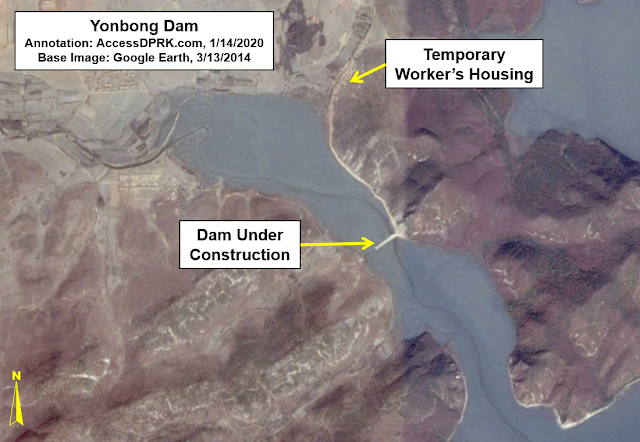 By October 2015, commercial satellite imagery showed an apparent administrative area under construction as well as the excavation of seven hovercraft storage bays into the side of a hill (in three groupings of two and an individual one, located immediately east and south of the dam).

Part of the national coastal barrier was also in the process of being demolished which would otherwise have blocked access to the sea. 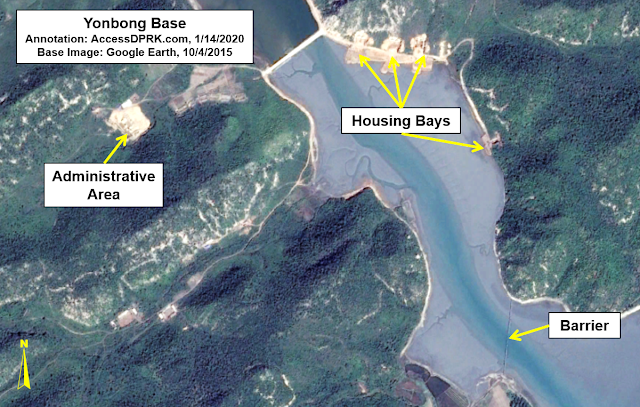 October 4, 2015 image showing the initial excavation of the hovercraft housing bays and the location of the old barrier.

Fast forward to April 2018, and a total of 54 individual housing bays were in various stages of construction, foundations for additional support facilities had been laid, and a seawall and small pier were also constructed. Several bays also had concrete walls built and their entrance structures completed. The entrance structures also allow for on-site maintenance instead of needing to move the hovercraft around various other parts of this rather expansive base. 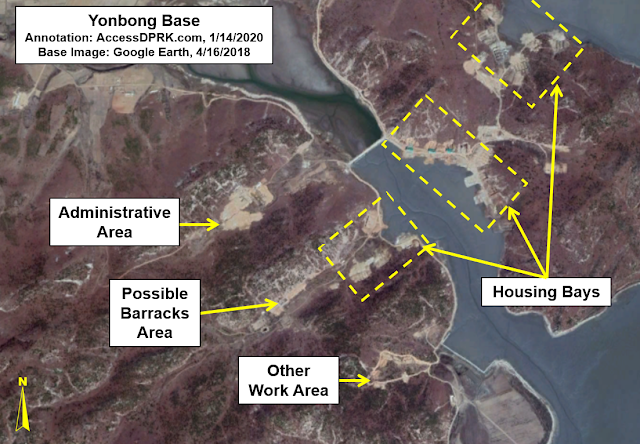 By April 2018 construction had begun on three large groupings of housing bays as well as support facilities across the base. 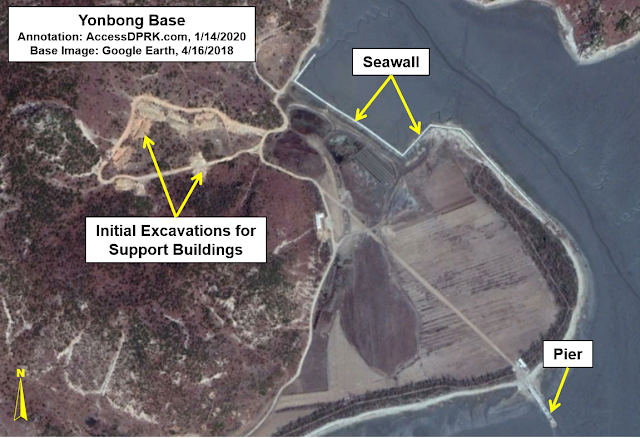 At the same time, approximately 560 meters of sea wall had been put in place as well as a pier.

By October 2018, additional foundation work at various sites within the base had been carried out, as well as some further construction of other buildings. However, the most recent Google Earth imagery (Nov. 6, 2019) shows a mixed picture.

Two bays have been completed with roof framing added to another set of two bays. Four additional bays have had their side walls constructed as well, and the temporary worker's quarters still exists.
At the same time, none of the administration or support buildings have been completed and some of the bays still haven't been fully excavated. In fact, some sites appear to be neglected and overgrown. 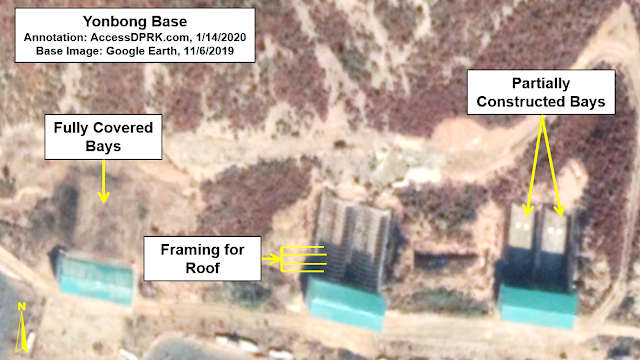 In this image, the original three sets of two bays are nearing completion. The left-most bay is finished and covered in dirt, the middle bay has framing installed for the roof, and the far-right bay doesn't have framing but does have its side walls and entrance structure completed. These three sets are the only ones with their entrance & maintenance structures in place. 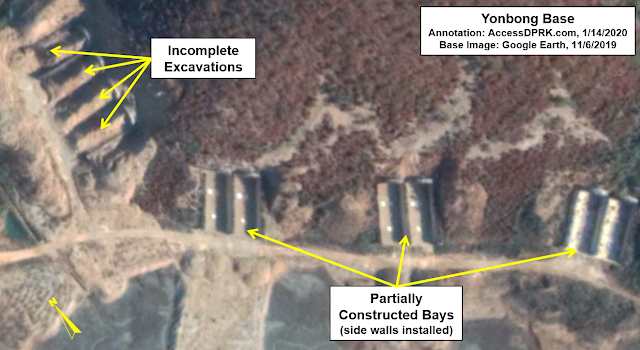 In this image you can see the partial construction of three sets of two bays and the incomplete excavations of four bays on the far left. 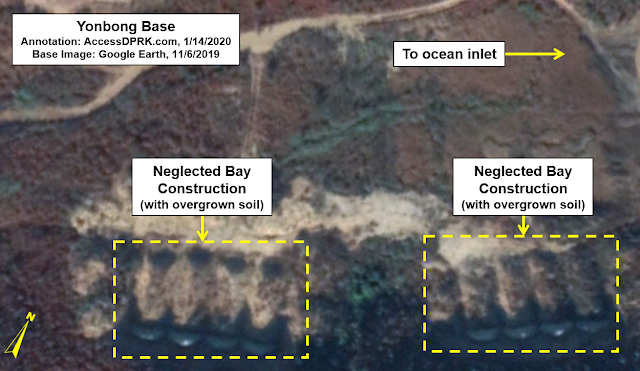 Despite construction elsewhere, these two sets of four storage bays seem to have been neglected and are overgrown with grass and shrubs.

The partial neglect of certain areas of the base appears to extend to the largest group of housing bays as well. 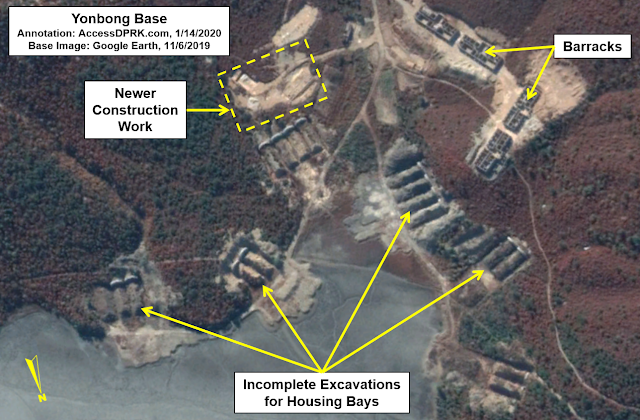 In this image, room for up to 18 individual hovercraft shelters has been partially excavated but none have been completed. Four barracks/support buildings were halfway built by mid-to-late 2018 but no further work has been carried out on them in the year or so since. However, a small area of newer work (new since Oct. 2018) can be seen to the left of the barracks.

Construction has certainly advanced beyond where it was in 2018 but the KPN may have decided to scale-back its initial scope. Another possible explanation for the apparent neglect of some parts of the base is that work began in 2019 on a kilometer-long tidal dam (which may eventually house a hydroelectric station) and personnel may have been redirected to that site to help finish it quickly, as military personnel are often used as general labor. This new dam is located roughly 0.8 km to the north of the northernmost sector of the base.

While the base isn't yet fully finished, the ongoing work at Yonbong-ni and work at military bases around the country demonstrates Pyongyang's continued dedication to their asymmetrical capabilities and their desire to have the capacity to inflict rapid and painful attacks against South Korea, as well as being able to defend their own territorial claims.

According to Joseph Bermudez, who wrote in detail about the initial construction phases of Yonbong-ni and the other hovercraft bases in 2018, the layout of the base "provide[s] significantly better protection from blast and fragmentation damage than any of the existing sheds or shelters found at other hovercraft bases."
Additionally, it offers "the advantage of being able to more easily land an assault force from the south and east without having to pass the heavily defended north side of [Baegnyeong-do]. More significantly, hovercraft from the Yŏnbong-ni base can quickly reach the ROK islands of Daecheong-do (Taech’ŏng-do), Socheong-do (Soch’ŏng-do) and Yeonpyeong-do (Yŏnp’yŏng-do) in approximately 30, 40 and 70 minutes, respectively; and the port city of Incheon can be reached in 90 minutes."