North Korea and the Coronavirus 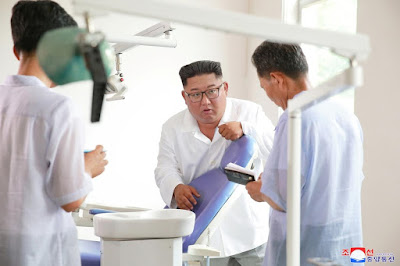 On January 22, 2020, North Korea closed its borders to international tourism (primarily because China is the biggest source of foreign tourists) and has since begun to consider halting domestic tourism within the country as well should it be deemed necessary. The country has also started work, albeit limited, with the World Health Organization.

Pro-Pyongyang groups like the Korean Friendship Association have praised these measures and described them as proof of the regime's care for its people. Indeed, North Korea has a long history of closing its borders during other outbreaks. The reality, however, is somewhat more pragmatic and less about the fatherly love of Kim Jong Un.

Like many communist countries, North Korea built hospitals all over the country in the early years after its founding and used that to promote the morality of their ideology compared to the "exploitative" healthcare systems of other countries. What gets lost in the propaganda is the true nature of those hospitals.

North Korea allegedly has hospitals in every town and anytime a major health facility is constructed, you'll see images of the Great Leader walking around and giving "guidance" regarding every aspect of construction, operation, and even aesthetic appeal. In recent years there has been a new eye care facility, a maternity hospital, and a new general hospital constructed in Pyongyang. Even a large medical device factory near Huichon was completely reconstructed to improve their products.

At the same time, the country has long been struggling to contain highly infectious tuberculosis outbreaks. According to the World Health Organization (WHO), in 2018 the DPRK had 131,000 new cases of TB, in a country with a population of 25 million. Some 20,000 died (increasing each year since 2016). The country's treatment coverage rate is 69%, compared to China's treatment coverage rate of 92% and Russia's 99%. The United States with its 315 million people recorded only 9,025 cases.

While TB is indeed very contagious, its early-stage treatment is relatively straightforward and there are several outside organizations trying to help, including the Eugene Bell Foundation which focuses on the more difficult and expensive treatment of drug-resistant TB (which makes up ~4% of TB cases in the country). Yet, the death rate keeps climbing. The driving force behind North Korea's inability to control the crisis is undernourishment compounded by an inadequate medical sector.

Undernourishment has been an ongoing problem for the country since the early 1990s. Despite the end of a nationwide famine in 1998, in some provinces as many as 32% of children under 5 years suffer from stunted growth as a result of nutritional deficiencies. This multi-generational problem even led to the North Korean military being forced to lower height and weight requirements to reflect this reality in order to meet recruitment demands.

Besides stunted growth, lack of adequate food can greatly increase one's risk of illness. Something like the annual flu becomes a much harder fight and fatality rates for at-risk populations (the very young, old, and those with other illnesses) skyrocket. This fact is also mirrored in the fatality rates of other coronaviruses such as SARS and MERS. The average death rate for SARS was 11% but jumped to nearly 50% for those over the age of 65.

Such disparities in fatality rates apply to all diseases and can be seen in all countries, but the additional stress of not having enough food or bodily energy reserves magnifies the risk of both getting infected and of dying.

This brings me back to the hospitals of North Korea.

The state of North Korea's healthcare infrastructure is among the least capable and prepared in the world. Local "hospitals" would hardly be recognizable to many westerners and are little more than clinics where you're just as likely to find odd assortments of herbs as you are to find medicine. This reliance on traditional therapies in a modern, "scientific" socialist state is because even basic medical supplies are in short supply or nonexistent in rural areas.

Unfortunately, international actions against the North Korean government have only worsened the health crisis. After a new round of sanctions, the country's only WHO-certified pharmaceutical manufacturer closed down in 2017.

This shortage of fundamental medicines like antibiotics and pain relievers only serves to exacerbate outbreaks of disease and lowers recovery outcomes.

The only moderately well-provisioned hospitals in the country are in provincial capitals and the national capital of Pyongyang. However, these services are not free. Regardless of the legal guarantee to free healthcare, patients have to pay for everything from the needle used in an IV to providing their own meals if hospitalized. This is out of reach for the average citizen. Making things worse is the rationing of medications and equipment. The very best is held back for use only by the county's tiny elite and to be used by foreigners (who also have to pay).

In view of North Korea's inability to provide adequate care to their own citizens without international support, let alone during an outbreak of a new virus, the decision to halt foreign tourism becomes about the fear of national survival. However, nations require more than just people to survive. The other thing to consider when trying to understand the actions taken by Pyongyang, is the fact that only tourism was stopped. Not trade.

Each year tens of thousands of Chinese tourists visit the country. But each year countless more thousands of North Korean citizens come in contact with further thousands of Chinese traders and businessmen. While the risk of an outbreak could threaten the North Korean state, ending trade with China would end the state. Thus, Pyongyang took a calculated risk. Lower the chances of the virus spreading by ending tourism but allow the risks stemming from trade because the country would quickly come to a halt without Chinese goods and the foreign currency generated through trade.

All of this comes not long after North Korea announced it would seek to create a medical tourism sector. This announcement came last year and was intended to begin this year. In a country where antibiotics are largely absent, aspirin is held dear, and where rumors of surgeries being performed without anesthesia routinely pop up, the regime thought it was best to use their medical resources to give outsiders new dental work and eye lifts.

The desire to become a medical tourism destination is rooted in the desire of the regime to make the money it needs to survive. Likewise, allowing person-to-person trade across borders is about maintaining the system. The risk of spreading infections is a secondary consideration. The real motivation is regime survival.

The state can survive a short-term hold on tourism, it can also survive having a few people receive amputations when a $0.05/dose antibiotic could have saved a limb or having a few people get sick from a virus which is much less deadly than SARS. The state can't survive, however, without the cash needed to fund its military or to buy the loyalty of elite families, and Pyongyang is still busy ensuring those activities continue with as little disturbance as possible.