The Wonchong North Korea-China border crossing is one of two crossings in Rason (Rajin) and one of 13 official crossing points either by road or rail with China.

In a long and slow process that has been occurring since at least 2009, the border crossing's snail-paced expansion seems to be nearing completion. The enlargement of this border crossing comes during a period in which North Korea has begun work on a new crossing and on upgrading two others. The bridge at the Manpo crossing was completed in 2012. Additionally, despite spending $350 million, construction of the New Yalu River Bridge, a large suspension bridge between Dandong, China and Sinuiju, North Korea has stalled.

The near completion (or full completion, as the most recent satellite image is from 2016) of the border crossing comes at a time of heightened tensions with China. China is North Korea's main trading partner, accounting for 60-70% of all imports and exports. Coal, being the single largest North Korean commodity has been used by the international community as one of the main economic pressure points to get North Korea to stop their nuclear weapon and ballistic missile programs. Since China is their main trading partner, China has held the responsibility for the bulk of sanctions regarding trade. Giving Wonchong added relevance, the crossing is near the city of Undok which is where the coal-rich 'June 13 Coal Field' is located. I would discuss the complicated history of DPRK-China trade relations (particularly with regards to coal), but you can find ample information on that in these two articles: The Myth of China's Coal Imports and China's 'Ban' on North Korean Coal Isn't the Tough Stance it Seems.

I wanted to bring up the trade issue because the continued work on border crossings tell a story of anticipated continued and expanded trade. While certain sectors like coal may see fluctuations, trade in consumer goods for North Korea's newly-minted middle class has meant a flood of Chinese products entering the North Korean marketplace. Medicinal herbs, trade in metals, foodstuffs, and other products have also risen sharply in the past decade. The long-term implications of all of this are likely to result in the weakening of the Monolithic Ideological and socialist regime. For now, construction continues.

One last bit of interesting information, the Wonchong crossing was the site of Christian Missionary Kenneth Bae's arrest in 2012. In April 2013 Bae was sentenced to 15-years imprisonment. After failing health (hard labor and starvation conditions tends to break people down) and negotiations, Bae, along with another American prisoner Matthew Miller, was released on Nov. 8, 2014.

Wonchong Border Crossing as seen in 2010.

The new bridge under construction can be seen by Sept. 6, 2015 as well as additional construction.

Work on the bridge deck is underway as of March 19, 2016. General construction continues as well. 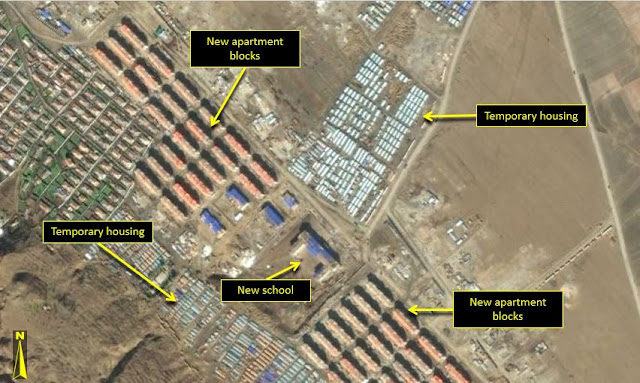 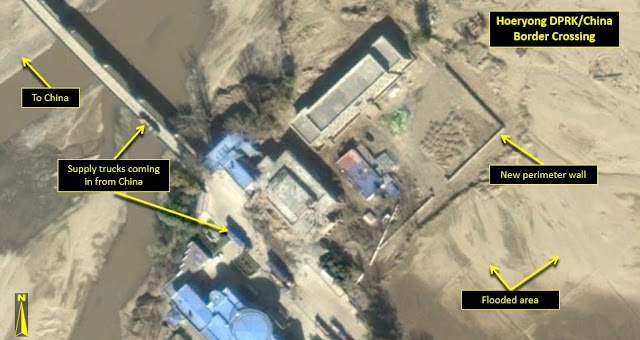