The Demilitarized Zone that separates the two Koreas is a bit of a misnomer. The super thin strip of land 4 km wide was created as part of the 1953 Armistice and aimed to keep both militaries apart and to create a safe, clear buffer zone. However, immediately on either side of the DMZ lies the bulk of both nation's armies. 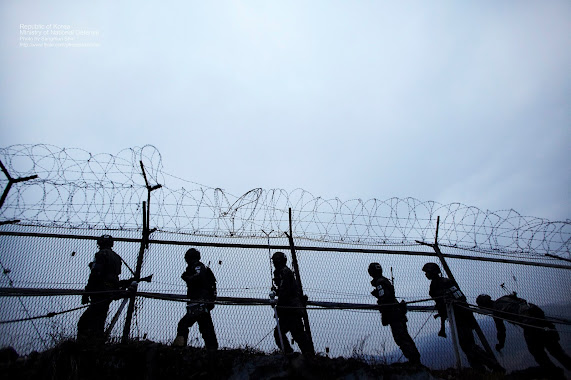 And while the United Nations' stipulated boundary (on paper) hasn't really changed over the years, the physical boundary itself has (as defined as the fences both sides use). Indeed, the path of the electric fence that runs for 250 km across the peninsula has changed more than once, and the small guard huts are constantly being built, torn down, relocated, and then moved again.

The effective border between the two countries is a line drawn in the center of the DMZ called the Military Demarcation Line. On each side of that is a narrow "no-man's land", penned in by the inner row of fences, and then a second line of fencing about half a kilometer from the first. This is supposed to create the 4 km-wide demilitarized zone, roughly 2 km on the north side of the MDL and 2 km on the southern side. However, the actual real-world width can vary considerably as both sides have tried to take advantage of the hilly terrain. In some places from the second line fence in North Korea to the second line fence in South Korea, the distance is 3.5 km, while in other spots it's nearly 6 km.

Fences of the DMZ. The central yellow line is the Military Demarcation Line. The "practical" DMZ is bounded by the northernmost and southernmost fences. (South Korean fence paths, in pink, kindly provided by Javier Rives.)

This variation in the "practical" DMZ has led me to use a line that's roughly 4 km from the MDL to serve as the DMZ zone of immediacy. This isn't the 4 km of official DMZ width, but 4 km starting at the MDL and moving north into North Korea.

The zone of immediacy not only includes the truly demilitarized no-man's land, but also the rows of guard towers (which are manned by soldiers), and numerous artillery and other military positions that form the country's first line of defense as a clearly connected set of military sites that stand apart from other defensive lines farther inland. It is within the DMZ-proper and the zone of immediacy that this article covers.

While the demarcation line doesn't change and the official layout of the DMZ doesn't either, the practical boundaries are created by two rows of electrified fences. The fences are guarded by hundreds of observation posts and even have machine gun nests constructed along the entire length of the DMZ; roughly one every 60-100 meters. Of course, those positions aren't manned and would only be used during a conflict.

Over the decades, the fence positions have been modified to take better advantage of the terrain and to allow for the best defensive posture while needing the fewest resources. One of the most recent examples of this is a 660-meter stretch at 38.065069° 126.847214°. It was built in late 2018-early 2019 and adjusts the fence's path slightly to the north. The original anti-tank ditch still exists but the old fence has been removed. 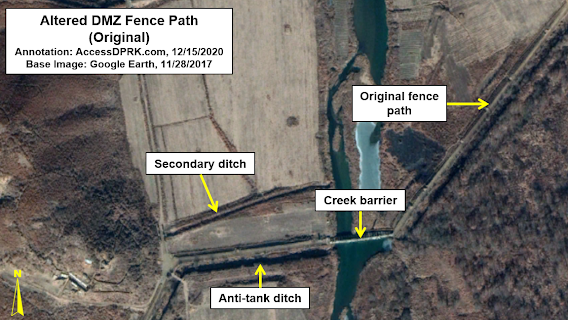 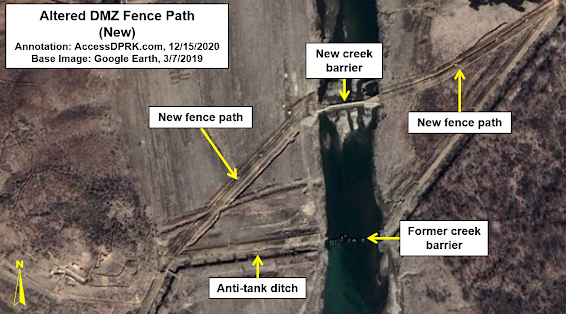 An example of a planned change that was never carried out can be found at 38.355133° 127.592494°. Sometime prior to 2007, the regime cleared a path 1.3 km long and ~12 meters wide along a hillside. They also dug machine gun emplacements. However, they never completed the new fence, and today the original fence remains while the 2007 path and emplacements sit largely unused; although, it does appear to have been kept clear of new brush growth. 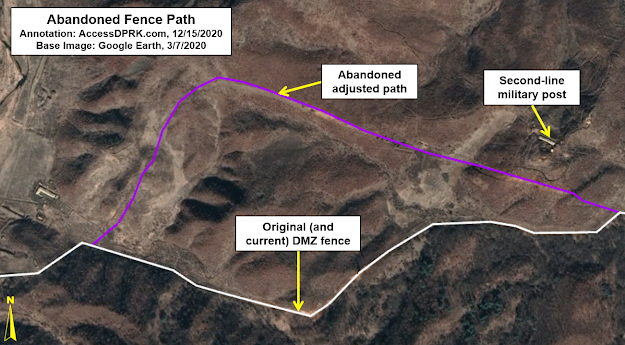 One of the largest changes in recent years actually lies at the end of the official DMZ and at the beginning of the Northern Limit Line, the maritime boundary between the two countries. The DMZ itself ends south of Kaesong, as the Han River and its estuary form a natural boundary. But both sides have those coastlines heavily fortified as well, and the double line fencing system carries on for another 53 km, until it reaches the Ryesong River.

In 2018, North and South Korea demolished ten guard posts each on their respective sides of the DMZ as a show of good faith during a period of diplomacy. This was the first time such an action had been taken and it was met with widespread international praise.

Unfortunately, as has happened for decades, each time the two sides try to work together, the diplomatic efforts quickly wane and grand schemes for cooperation and peace fade as new cycles of provocation begins again.

While the destruction of the posts may have been the most public demonstration of guard posts changing (either being removed or built), it happens fairly regularly as part of routine DMZ "maintenance," as each side finds better spots to place new posts, removes redundant ones, etc.

In the 2021 version of the AccessDPRK map, I was able to locate 544 stand-alone observation posts along the DPRK side of the DMZ. These small positions are usually manned by 2-3 soldiers, keeping an eye out for any unusual activity coming from the other side and to stay alert for any North Korean soldiers attempting to cross and defect. At least 18 new posts have been constructed since 2015, including at least four that were constructed during or after the joint demolition of guard posts in 2018.

By some estimates, North Korea keeps 60% of its artillery deployed within 100 km of the DMZ. But over the years, the disposition of that artillery has changed. Their deployments, types, and numbers have all varied over time. Of particular concern is their hardened artillery sites (HARTS).

These medium and long-range artillery positions are very often hidden behind hills or are otherwise obscured from direct line-of-sight (known as defilade) and can hold some of North Korea's largest artillery systems, including self-propelled guns and multiple rocket launchers (MLRs).

Within 100 km of the DMZ are at least 608 identified HARTS locations, each with multiple artillery pieces. (This figure agrees with the higher-end estimates noted in public sources). Between 2009 and 2017, 126 new locations were constructed, representing 20.7% of all HARTS in the region.

Almost all of these new sites are within 10 km of the Military Demarcation Line and several are within the zone of immediacy.

Map of new HARTS positions (2009-2017).
Roughly constructed in 9-10 groups, these HARTS were built to hold self-propelled artillery like the Koksan and 122 mm, 130 mm, and 152 mm systems. One of the most talked about weapons is the Koksan (M-1978) 170mm self-propelled gun. These have a maximum firing range of 60 km.
The group of positions to the far west of the image is predominately MLRs constructed after the 2010 bombardment of the South Korean island of Yeonpyeong. They are large enough to accommodate the North Korean variant of the Soviet 122 mm BM-21 Grad multiple rocket launcher, which was suspected to have been used during the bombardment.
The rest of the new HARTS sites appear to be for other towed and self-propelled artillery systems. 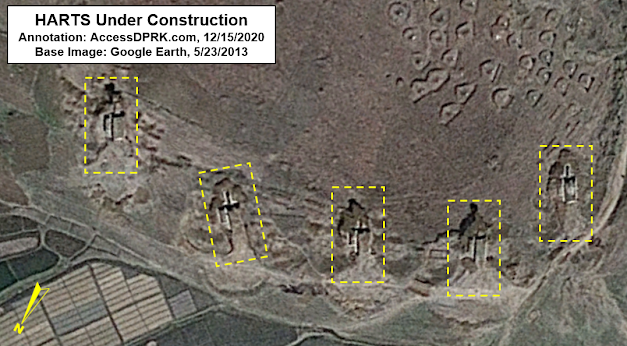 The above image shows five individual gun emplacements constructed together as part of a single battery. There are a total of three batteries in the immediate area. These three batteries hold 16 guns combined. Fired in a volley, they could launch as many as 560 rounds every five minutes.
You can also notice that they were built as close to the DMZ as feasible to maximize the amount of effective range within South Korean territory. Other HARTS have been constructed farther inland over the decades to serve as a second-line defense in the event of an invasion. These, however, are very much intended as offensive positions to threaten Seoul and ROK soldiers stationed along the DMZ. 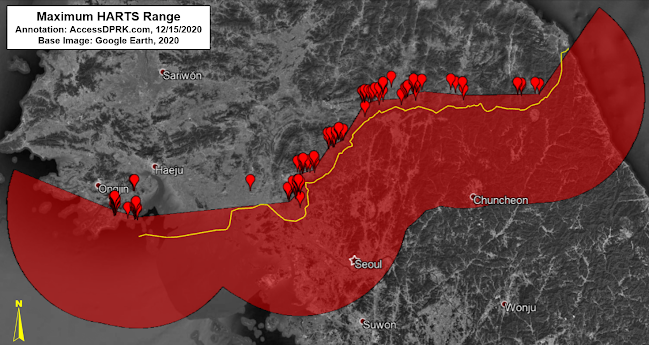 According to RAND Corp., a single barrage along the entire length of the DMZ of all artillery pieces (not just the newest HARTS batteries) could fire as many as 385,000 rounds in an hour and kill over 205,000 people.

Due to the overlapping nature of each artillery piece, the following map shows the areas held most at risk by the greatest number of new guns, with some areas being within range of over 30 distinct batteries (each with 4-6 individual artillery pieces). 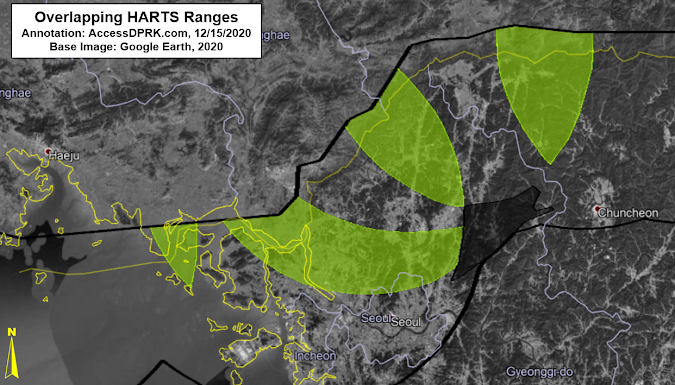 This map shows the areas under threat from the highest number of new HARTS. The black wedge is also under great threat but lies at the far-end of the artillery's range, meaning fewer shells would likely reach the spot than those in yellow due to the high failure rate of North Korean artillery shells.

Downtown Seoul is in range of at least 30 new batteries but the area just to the north is within range of 47, which is why most of Seoul is not highlighted on the density map.

Other changes occur within and around the DMZ as well, though not necessarily as important as the ones described above. Many places within the DMZ (on both Northern and Southern sides) are routinely burnt to get rid of underbrush and create optimal observation conditions. What environmental impact this burning has on what has become an "accidental wildlife paradise", is little known. This also leads to increase erosion and will speed up the natural change in topography over time. 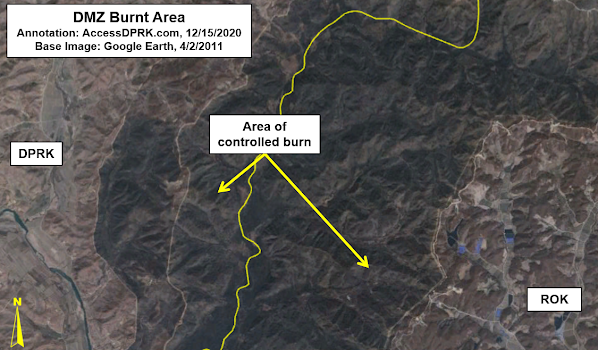 What began with the intention of being a temporary border has turned into a permanent feature of Korean division that has spanned three generations. The DMZ and the area around it have shaped the lives and destinies of millions and has become a sort of distant backdrop on which their lives play out, but it is certainly not a static feature. Lives are still lost and hopes are raised on this backdrop, but for as long as the peninsula is divided, it will stubbornly remain a symbol and a threat; one that can drastically change with the ebbs and flows of inter-Korean relations.

Posted by Jacob Bogle at 2:43 PM No comments: