Abandoned Projects of the DPRK

A lot of attention is given to the various plans and policies of North Korea. From Kim Jong Il's songbon (military-first) to Kim Jong Un's byungjin (duel-path focusing on nuclear and economic development), each time a new declaration is made many people tend to overreact as though they're somehow distinct or substantially different from the previous policy.

The fact is, they're all variations on a theme. The byungjin policy promulgated by Kim Jong Un is little different than national policies set out by North Korea's founder, Kim Il Sung.

Simultaneous focus on light industry and energy, focus on feeding the people and building nuclear weapons. It all boils down to this: keep the economy going and maintain the military. In classic Stalinist style, these kinds of policies either do little in reality or take an inordinate amount of time to achieve.
They rely on the mass work of millions and the ramping up of efforts in one sector only to lurch to some other area. And in the process, an enormous amount of inefficiency shows up and completely wasted effort is expended. Adding to the inept economic planning of the last 75 years is the fact that none of these policies acknowledge the strain prestige projects add to the system.

The country has spent combined billions on empty mega hotels, palaces for the dead, and trying to "save face" by competing with South Korea in ways that ended up making the 1990s famine even worse (such as the case of the 13th World Festival of Youth and Games which consumed a quarter of the country's entire budget).

Naturally, this means the country is littered with abandoned or half completed projects as the country's direction is moved from one focus to another, often with little regard for sound economic or military principles. 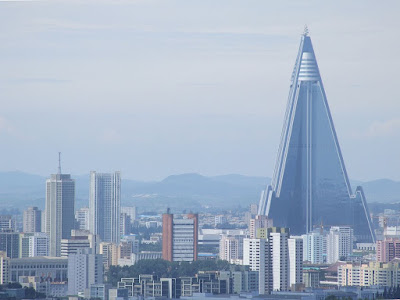 The "Hotel of Doom" as seen from the Yanggakdo International Hotel in 2012. Image: Commons/Nicor

The most well-known abandoned project is the Ryugyong Hotel in the middle of Pyongyang. Construction began in 1987 and it was intended to be completed for Kim Il Sung's 80th birthday in 1992. Lauded as the soon-to-be "world's tallest hotel", construction was never finished, and it sat for many years as little more than concrete and steel shell. This helped earn it the nickname "Hotel of Doom". The collapse of the Soviet Bloc dried up foreign investment in North Korea as well as put an end to imported construction materials that had been sold at discount "friendship prices". By the time work halted in 1992, some estimates place the price tag at $750 million.

Two years later a famine began, and a million North Koreans died of starvation and related illnesses. The hotel was such a failure that in some images of the Pyongyang skyline, officials altered the pictures to remove the building. It was basically ignored and soon "officially" never existed, its giant corpse looming over the grey capital of a grey and dying country.

It wasn't until 2008 that construction resumed with a $400 million investment from an Egyptian company. By 2011 the exterior was finally clad in glass and, from a distance, it at least looked like it was completed. However, as many international firms have learned, trying to do business with North Korea is extremely difficult and initial costs often far exceed the original estimates. The building has structural problems, the regime can't produce the quality materials needed, and the building still sits unfinished and empty. The biggest change since 2011? The addition of LED lights to the outside that can produce light shows. $1.1 billion spent on a hotel, just to get light shows.

Under Kim Jong Un, North Korea has been investing huge sums into their conventional (non-nuclear) military forces. This has included expanding their ability to project force using the country's fleet of hovercraft.

Hovercraft offer the regime the ability to rapidly attack South Korean bases and other targets, and to insert special operations forces while limiting South Korea's time to fully react. 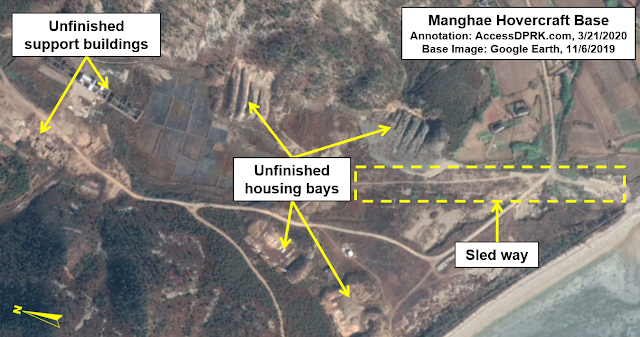 The unfinished hovercraft base at Manghae-dong.

The biggest of the new bases is at Yonbong-ni, along the Yellow Sea (West Sea), but work has been slow going. The military established two other future bases as well. Their stories are even less successful.

Nearby Yonbong-ni is Manghae-dong. The first signs of construction appear in 2015 and by 2018, sixteen hovercraft housing bays were under construction. The beginnings of a "sled way" to allow the craft to go from land to the sea is also visible.

However, by the end of 2019 very little new work has been done and much of the site looks abandoned. Further evidence of this is the fact that most of the temporary workers' housing has been removed. 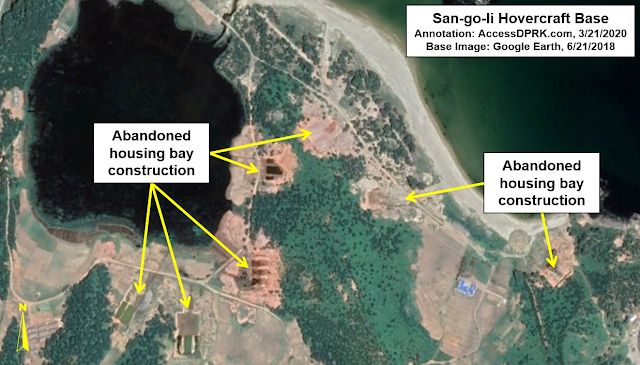 The abandoned housing bays of the San-go-li hovercraft base.

A facility at San-go-li (in Kangwon Province) has fared even worse. While Manghae still exhibits a little life, Son-go-li has been completely abandoned.

While the initial excavation of ~19 housing bays began in 2015-2016, that's as far as things went. The latest image from Google Earth shows the place abandoned and the bays flooded. In the meantime, a new coastal hotel was constructed 0.8 km away.

North Korea has a notoriously bad road network. A road trip that might take an hour or two elsewhere, could end up consuming an entire day in the DPRK. Part of this because they lack the money for infrastructure and part is actually on purpose. If you have few paved roads and lots of dirt paths, it makes it awfully difficult for an invading army to quickly move along.

However, there have been attempts to improve the country's road network. Some of them have been successful and other plans have been left by the roadside. One such abandoned project was an extension of the Pyongyang-Huichon Highway (HWY 65) near the historic city of Hyangsan.

Hyangsan sits at the base of Mount Myohyang, which plays an important role in Korea's mytho-historic past, and is where the International Friendship Exhibition is. Huichon is 17 km away.
Huichon is an important industrial and military city, and is the second largest city in Chagang Province. Thus, ensuring rapid transit from the city to Pyongyang would be an important goal.

The bulk of the 4-lane highway coming from Pyongyang was constructed in 1994-95, but stopped at Hyangsan, where it shrank to a winding 2-lane road. Coming south from Huichon, the smaller section of the planned 4-lane highway was actually begun in 1990 but was never completed. Bridge piers sit stranded in fields, and hills have large scars from the excavation work, but no road exists. The abandoned section would have been 21.5 km long and take a mostly straight path. The current 2-lane route follows the Chongchon River and adds several kilometers to the trip. 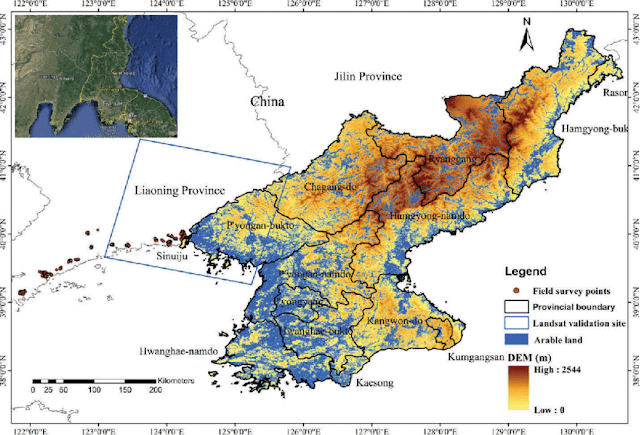 North Korea is very mountainous and less than 20% of available land is arable. But the country does have 2,500 km of coastline with vast tidal flats in the west, and that means opportunities for land reclamation.

The projects typically involve blocking off tidal flats from the sea and allowing river sediment to backfill the area or taking a more direct approach and manually filling in the land with countless loads of soil. Another process is connecting nearby islets with dams/barriers to enclose an area and having it filled. 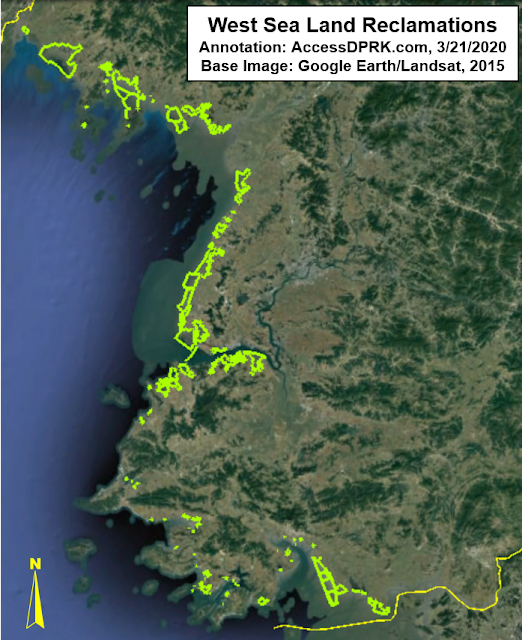 The Ryongmae Island Project was supposed to yield 3,676 acres of new farmland. Initial reclamation attempts even go back before 1985, but there has been little progress. 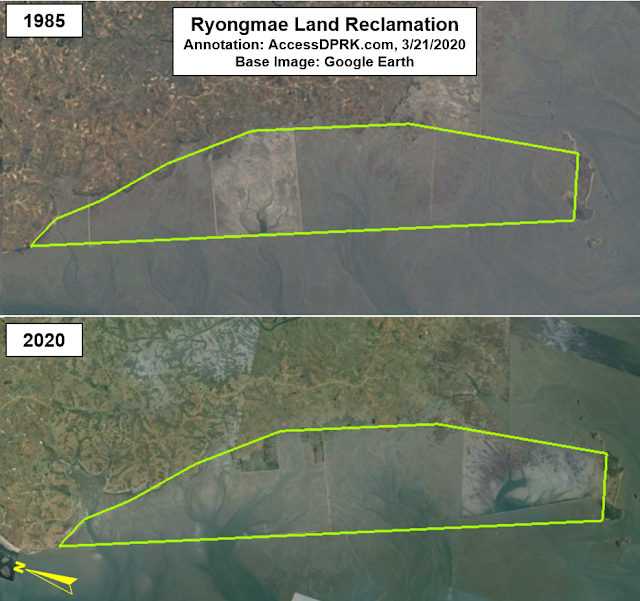 Ironically, there is some debate as to the caloric value of reclaiming coastal land to grow rice. It may be that there are more calories and protein in the countless small fish and crustaceans that otherwise live in these areas than the country might yield growing rice.

North Korea has struggled with electricity generation for decades. It has several large thermal power plants (each working at varying degrees of efficiency) and scores of hydroelectric facilities, but they're inadequate to the task and very few places in the country can count on electricity all day, every day.  Hurried construction based on arbitrary timelines (such as political anniversaries) also results in flawed construction and inevitable delays, meaning they're always playing catching up.

To try and address the electricity problem, the regime began constructing a new coal powered plant near the village of Samdung, south of Kangdong. Construction began in 2011 and carried on through 2013, at which time construction came to a halt. Seven years later and no progress has been made. 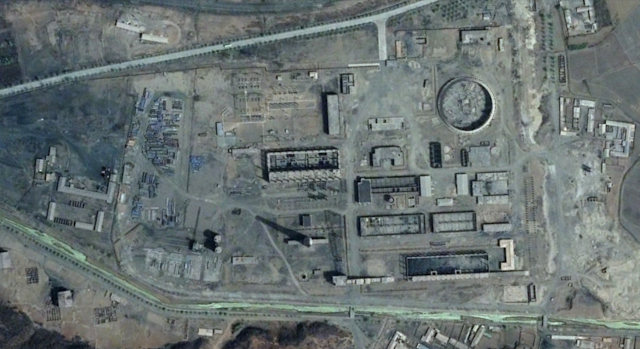 Even when it comes to letting people have fun places to go to, internal politics results in millions of wasted dollars.

The Pyongyang Folklore Park was a microcosm of North Korean identity. It had replicas of ancient palaces, a scale model of Mt. Paektu, and many other attractions. Construction began in 2008 and was mostly completed by 2013. It was Kim Jong Un's uncle, Jang Sung-taek who allegedly managed the project and helped make it a reality. Kim had Jang killed on Dec. 12, 2013 for a myriad of reasons. 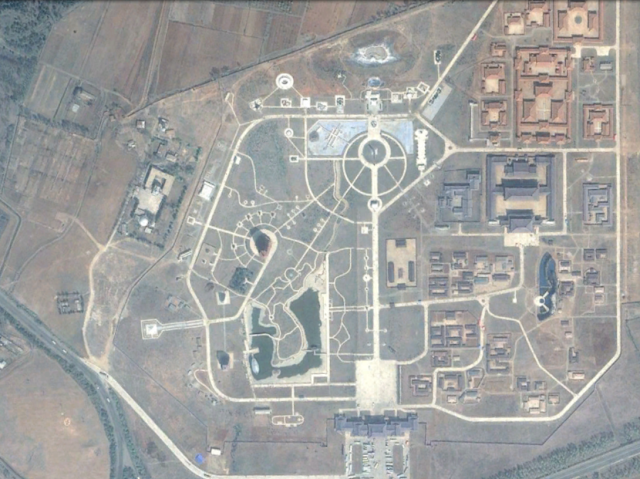 As Kim Jong Un consolidated his power and once he felt secure from the ghost of his once extremely powerful dead uncle, he closed the 80-acre park in 2016 and began to demolish it. All that remains today are piles of rubble. 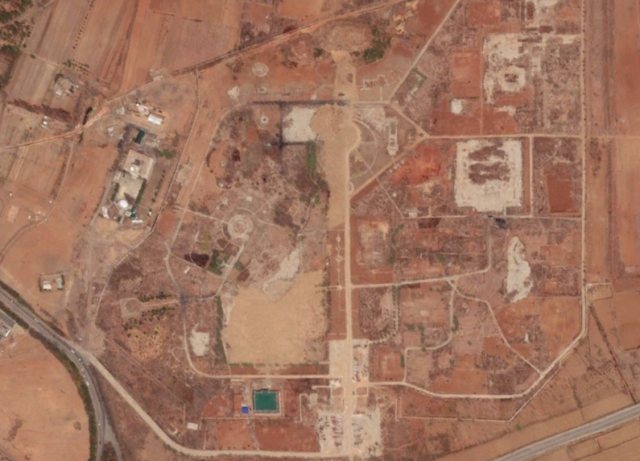 
There are many other examples of abandoned projects and ones that were sidelined while the nation's entire output of construction materials was sent to one or two specific sites (like new Wonsan resorts and the rebuilt city of Samjiyon). This behavior highlights the inefficiency of command economies and shows just how vulnerable the people are to the whims of Pyongyang.

At the same time, other projects have been under construction for decades, as work progresses in fits and starts, seemingly without reason. Two interesting examples would be the Hagap Underground Facility and the Kangda-ri underground runway.

However, despite all of this waste and the suffering it prolongs, the country's economy and military has advanced ever so slowly. Kim Jong Un does seem to have been able to pull many disparate threads into something quasi-functional. It must be said that his rule has been more effective than that of his father's; unfortunately, it has been just a cruel.


I would like to thank my current Patreon supporters: GreatPoppo, Kbechs87, Planefag, Russ Johnson, and Travis Murdock.