This past year has been a banner year for both the project itself and its wider goal of being a fundamental resource for helping to shed light on North Korea.

The #AccessDPRK blog will celebrate its seventh anniversary in February 2020 and currently contains 97 articles which, if printed out, would equal over 570 pages worth of material.

For 2019, I was able to write 28 articles for the project which is the most in its history. Additionally, 70 images were analyzed for those articles. A further 196 images were shared and discussed on Twitter.

Some more social media stats include: over 384,000 Twitter impressions for tweets relating to North Korea and the project (that's a 92% jump over last year), and gained over 100 new followers. I also created a Facebook page that offers a variety of material that won't always be found on Twitter.

Last year's most popular tweet was about ongoing work at the massive underground complex in Hamhung. 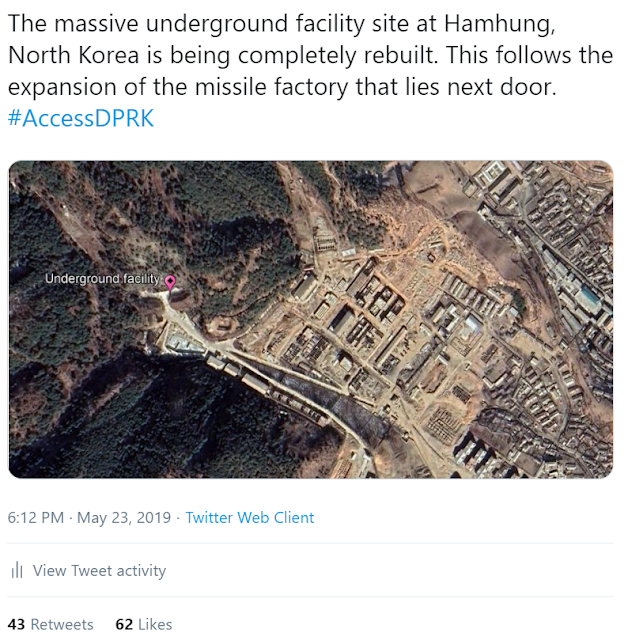 AccessDPRK.com traffic was also 32% higher than last year, in part because of the largest news story to come from the project thus far.
In August I wrote about an ongoing industrial leak from the Pyongsan uranium milling plant that was pouring into a river. My report was picked up by RFA before quickly spreading around the world. For a time, it was the biggest news story in South Korea. Concerns over the leak (as the river eventually flows into the Han River) spurred the South Korean government to test for possible radioactive contamination. Thankfully, no dangerous levels were detected. However, 400,000 North Koreans still use the water for drinking and farming, and the risks of heavy metal contamination is far greater for them.

I finally set up a Patreon account so that people can directly support the project. With multiple support levels ($3, $5, $15, and $20 a month), it offers ways for people of any economic means to help. I have worked to come up with exclusive rewards and I'm currently in the process of creating even more.

Working on AccessDPRK isn't free. It costs money to have websites and domain registration, and books and other research materials come at a price. Then there's the matter of fairness. I have literally put thousands of hours into creating the maps, analyzing images, and writing articles, all because I believe in the mission of sharing information about North Korea. But I can't keep doing it alone or at the cost of working on other things in my life.
So if you see value in the last seven years of the project and look forward to more in the future, please do think about helping out. The more support I get, the more I can do. 2019 was certainly proof of that.

Speaking of doing more. Last year I added well over a thousand new places to what will become the final Google Earth-based map: Phase III. I also set a goal of completing it by 2021 and expect it to contain around 60,000 places of interest. There's nearly 100 individual categories of places that I am mapping divided into three broad sections: monuments, military, and domestic/economic. The end result will also be organized somewhat differently than 2017's Phase II, to improve its ease of use.

Finding examples of people using the project to help in their own research is always great. For the second year in a row RAND Corporation used parts of Phase II to assist in creating their report "Four Problems on the Korean Peninsula". Additionally, I was able to help a number of university students and researchers with their respective projects.

AccessDPRK also received a little unexpected publicity in December with the publication of "The Self-Appointed Spies Who Use Google Earth to Sniff Out Nukes" by Amy Zegart for The Atlantic. In the piece, Zegart looked at the open-source community and its efforts to serve as watchdogs against nuclear proliferation. She used several examples of non-government individuals and groups who monitor North Korea, Iran, and China, and AccessDPRK was among them.

I have also been able to occasionally contribute articles to NKNews.org (Pro). These articles draw upon what has been learned from the most recent North Korea research including things exposed by this project. I'm really proud of this.

North Korea's recent WPK Central Committee's Fifth Plenary Meeting strongly indicates that 2020 is going to be a rather interesting and provocative year, and I am looking forward to taking on the challenge with your support.