Kangdong Residence is a summer retreat and the secondary main residence of the leaders of North Korea. It is located about 19 miles from downtown Pyongyang near the border with South Pyongan Province and includes multiple houses, pools, horse tracks, a dedicated rail line, security barracks and more. Near Kangdong are two other elite residential compounds which seem to be satellite residences for other members of North Korea's inner circle. The main compound encompasses an area greater than 1.5 square miles. Between 2006-2011 several improvements and additions have been constructed (such as the trail station and an underground entrance).

Like all official residences (there are more than a dozen), security is tight. Kangdong airfield is nearby and the compound is surrounded on two sides with multiple anti-aircraft artillery sites.

You can get the full KMZ file of this compound for Google Earth here. 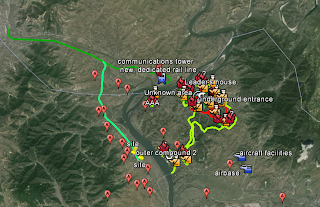 (click to view larger)
The above image is a large view showing everything. The main compound is off-center to the right, the dedicated rail line is in green (with another line being built [lighter color] which goes to 2 unknown facilities), the anti-aircraft artillery sites are marked with the red "A-drop" icon and the yellow & red lines are fences.

Below, gives a less cluttered look of the defensive positions with Kim Jong-un's residence marked. 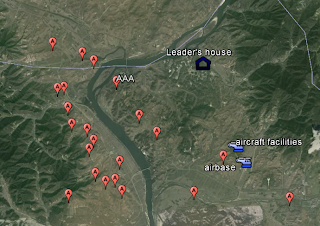 Like all official compounds, the area is ringed with successive fences. Some are basic and others are electrified with multi-layered walls and firing positions (along with a vast network of foot paths). 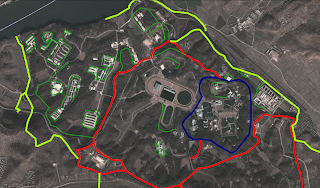 The purple line marks out the main walls and surrounds the primary residences. Red denotes an outer "inner" wall, yellow is the outermost fence, and green marks out other basic walls surrounding various buildings.

Here is a close-up of the main residential section. There are 19-20 homes and you can see the wide fence/wall system surrounding the area. 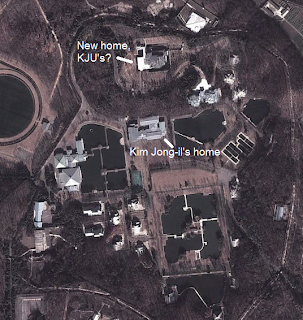 Here is a larger view of the main compound. 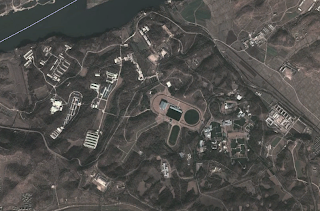 Again, with fences showing and some places marked. 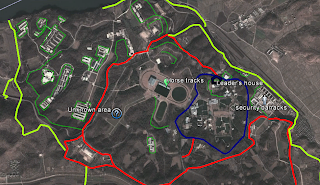 As I said earlier, there have been some additions. This is an image from 2004 showing the main residential compound, you'll notice the house I marked as possibly Kim Jong-un's isn't there and the horse track is different. There is imagery from 2006 without the additions but it was taken during winter and isn't as clear. 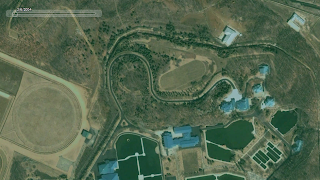 And the newly built train station. 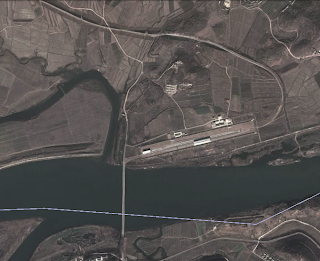 Leading south from the train station is a road and bridge which crosses the Taedong River. Once you cross the river you come to a gate. This gate serves as one of many, but it is one of the main entrances. If you follow the northern route (take a left if you're on the road) you will end up at the main complex. If you take the road in the left of this image you will get to the first "satellite" compound (which is pictured further below). 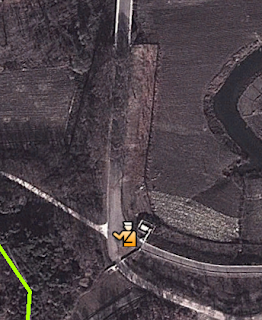 This is a side-by-side before & after image of the underground entrance. It goes beneath the hill the new palace was built upon. The left-side image is from 2004, the right is 2011.

Scattered around the complex are storage bunkers. Based on my understanding they're used to store fuel. However, some could be used to store anything and one or two may be large enough to be used as some kind of emergency bunker in the event of a war or attack. 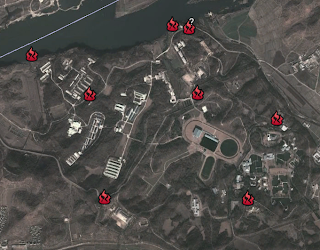 A close-up. The rounded areas are the actual bunkers and it has a maintenance shed nearby. 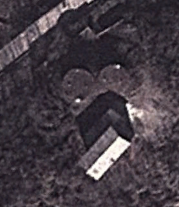 There is also a very odd and very large area next to the horse tracks which covers the floor of some small valleys between hills. It is made up of hundreds (if not more) of these rectangular structures. Each are aligned side-by-side 10 or 12 feet apart. The whole area covers more than 230,000 square feet based on my calculations. I have no idea what they are, nor does anyone else I know. 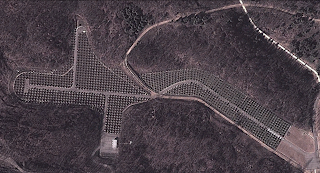 Here are the other two smaller "satellite" compounds. 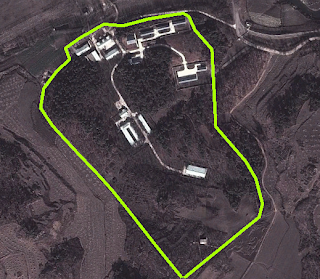 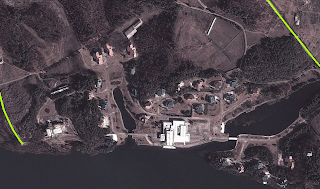 And finally, a side track is being constructed off the main train track. It goes south and ends at two sets of newly constructed buildings. 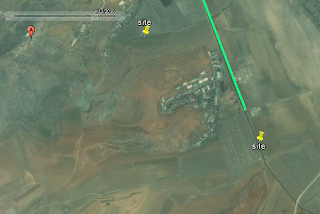 And the facilities as seen in the latest available imagery (2011). 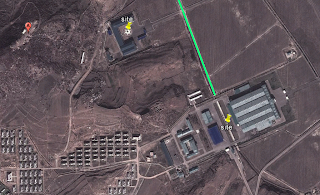 I hope you enjoyed this little trip around Kim Jong-un's backyard.

Google Earth pools data from many sources, weather satellites, public imaging satellites, and aerial photography, and often the information between each source is years apart. This leads to a wide variety of resolutions (0.5 meter to 2.5 m plus) and quality.

These resolution variances offer an interesting obstacle when it comes to mapping North Korea. Some of the images are merely days old with resolutions of such quality you can make out individual windows and see people walking in the streets. 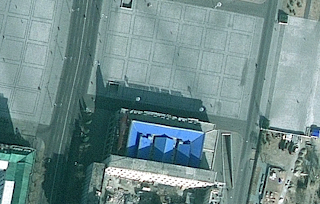 And then there are other regions, mostly from France's National Centre for Space Studies (CNES) SPOT satellite, where the resolution is measured in meters. At this resolution you can only make out large structures, like the outline of houses. 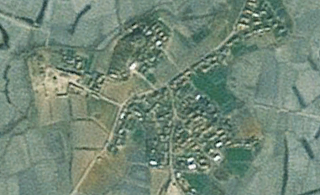 Given the low resolution of the SPOT images, it can be almost impossible to definitively label something. Attempting to interpret an image is pointless in most cases. So, to help keep me (and others) from spending so much time scanning around trying to find an area of higher resolution, I've mapped out all of the larger low-res regions. Surprisingly, they make up a decent chunk of the country. 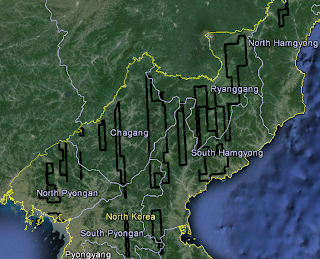 Once I've gone through the better quality regions, I will go over these low-res areas and mark whatever items I can find. You can download this file here.

Just for fun, I'm going to provide several examples of the different resolutions, colors, and seasons that one can find while exploring North Korea. 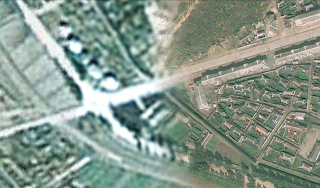 This is Pukchong, South Hamgyong. It is split between SPOT imaging and higher resolution images. 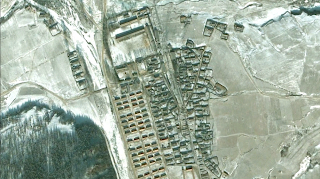 A town during winter 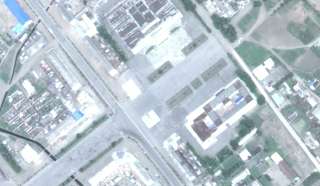 From MapABC, a Chinese company. Notice the poor coloration. 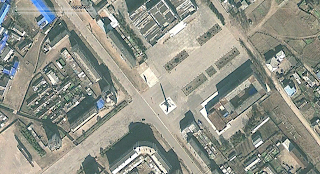 The same area in 2010 from Digital Globe 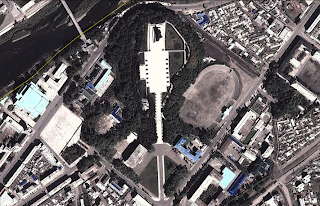 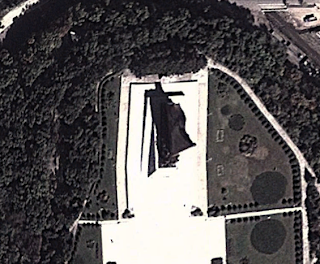 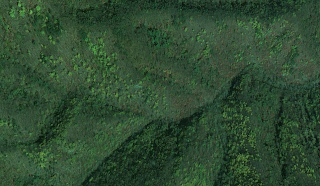 And this is an example of what I call "foggy" imagery. I don't know what causes it, but it has nothing to do with actual fog/smog etc. It annoys me to no end because it makes it difficult to pick out certain features, like monuments or propaganda signs. Plus, it's just rough on the eyes. 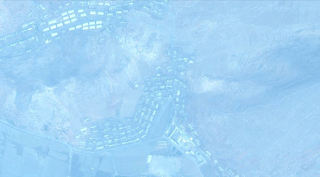