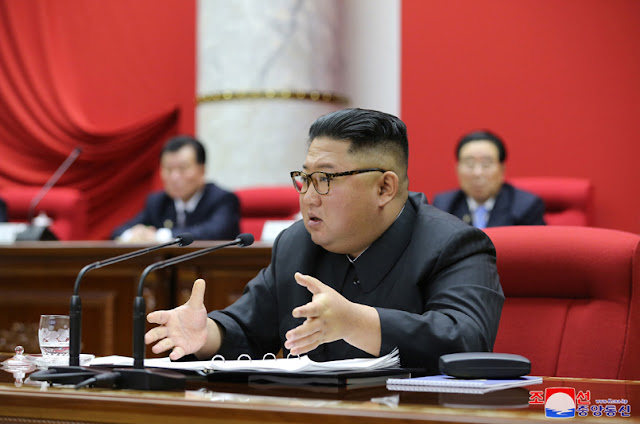 The official reports on the substance of the meetings have been short on detail, but they have mentioned a few key points that can give us an understanding of what’s going on. During the “enlarged” Seventh Central Military Commission meeting, the Korean Central News Agency (KCNA) said the, “meeting would decide on important organizational and political measures and military steps to bolster up the overall armed forces of the country…” and “discussed were important issues for decisive improvement of the overall national defence and core matters for the sustained and accelerated development of military capability for self-defence.”

Stressing the point further, the report went on to say that at the meeting they rectified “irrational structure and defects in machinery and some shortcomings in other military and political activities…” This means streamlining the military bureaucracy and realigning military and related facilities to be more effective toward accomplishing national defense goals.

During the Fifth Plenary Meeting of the Seventh Central Committee of the Workers' Party of Korea, the KCNA reported that the agenda emphasized “the need to take positive and offensive measures for fully ensuring the sovereignty and security of the country as required by the present situation, [Kim Jong Un] indicated the duties of the fields of foreign affairs, munitions industry and armed forces of the DPRK.”

While these statements are relatively broadly worded, they echo what has come out of previous meetings. The result of those meetings, policy changes, and decisions by Kim Jong Un has repeatedly resulted in the ongoing development of nuclear weapons, ballistic missiles, and upgraded capabilities of their conventional military forces.

North Korea has generally taken a cautionary approach. When diplomacy seems to be working, they’re willing to halt major weapons testing. And when things start going sour, they resume provocations. But throughout it all, they have not altered any of their core military doctrine or cut themselves off from necessary infrastructure or strategic development.

The Center for Strategic International Studies, 38 North, myself, and many others have spent a lot of time monitoring not just North Korea’s nuclear and ballistic forces but also their conventional military capabilities, and one thing has been made very clear: under Kim Jong Un, major upgrades to all branches of their military have been underway. Regardless of any specifics, these two meetings have underscored this ongoing trend of modernization and the realignment of military structures.

This trend can be seen in the fact that Kim Jong Un has tested more missiles than his predecessors combined, tested the country’s largest nuclear device to-date, and, as mentioned, is currently embarking on the reorganization of military bases and expanding their training capacities.
This reorganization and the overhauling of capabilities is a keystone of what the Party has now laid out and it can be seen in the following examples.

Regarding their nuclear program, there has been a large amount of construction work in recent years at the Yongbyon Nuclear Research Center, and that work is ongoing. The Pyongsan uranium mine and milling plant continues production and seems to have taken on the role as the regime’s primary uranium milling plant as the smaller site at Pakchon has been placed in caretaker status and is somewhat now redundant. Focusing on Pyongsan saves resources and allows for needed improvements at Pyongsan, such as those seen from 2013-2015.

The Tonghae Satellite Launch Station has been placed in caretaker status as well, as additional resources have been poured into the more capable Sohae Satellite Launch Station. Keeping some sites in caretaker status also gives the regime the latitude to make token concessions (such as the demolition of a single test stand) without fundamentally degrading their capacity for testing, while still being frugal by not keeping both sites at full operational status.

In keeping with the theme of centralization, Pyongyang’s General Satellite Control Center is in the process of expansion, and ongoing work at the National Defense University has been identified as its role in both ballistic research and its place within the burgeoning personality cult of Kim Jong Un grows.

The country’s missile testing facilities have likewise been streamlined. The short-lived Kalma test site was decommissioned in favor of the expanding capabilities at the nearby Hodo Launch Area. And, a test stand was erected at the Sinpo Submarine Base to enable the further development of submarine launched ballistic missiles (SLBM).

Their munitions industry has also been expanding, as the Central Committee meeting has now publicly emphasized. A very recent example of this is the expansion of the March 16 Factory in Pyongsong which produces military equipment needed for their missile program. Ongoing work can also be seen at a massive underground facility and related factories in Hamhung.

Changes haven’t been limited to industrial centers or test sites. Even the ballistic missile bases themselves have been enlarged with new housing and additional support facilities. The northern base at Yeongjeo-ri has also had a large annex constructed nearby (construction was completed under Kim Jong Un).

In terms of naval power, a major, multiyear reconstruction was carried out at the facilities around Muchon, and Changrin Island (on the west coast) has had a naval base built on it. The island recently made headlines for artillery tests carried out from it. Analyst Joseph Bermudez has given a detailed report about a large hovercraft base in Yonbong-ni under construction. Such bases can be used by strategic and special operations forces to quickly infiltrate and destroy South Korean targets.

Then there’s the aforementioned submarine base at Sinpo. Not only has a missile test stand been erected but the manufacturing abilities at the base have been improved and other construction activity can be seen. The first test of the SLBM Pukkuksong-3 was carried out in October of 2019, and there is growing evidence that North Korea is building a new type of submarine at Sinpo.

As I noted in early December, the regime has taken several steps to make the most of its aging air force. Under Kim Jong Un, the capacity to train paratroopers has been nearly doubled and their airfield infrastructure has likewise been improved.

One of the goals of the Central Committee’s meeting was also to discuss ways to improve agriculture and that, too, connects with the military changes. Unessential airports have been closed and one, Kyongsong-Chuul, was recently decommissioned to allow for the construction of a massive agricultural center. This drive to increase food production in conjunction with military improvements can likewise be seen through changes at KPA Farm No. 1116. This key agricultural site in Pyongyang underwent a modernization program in 2019 and was visited by Kim Jong Un in October.

Of North Korea’s Army, the area of training has been a major focus. An important military operations on urban terrain (MOUT) base near Kangdong added 11 km of new paths in 2019 for training soldiers on how to operate various equipment. Similarly, KPA bases near Yongbyon, Pukchin, Haeju, Changdo, and Sepo have all undergone notable expansions since Kim Jong Un came to power.
Completely new bases have also been constructed throughout the country.

This centralization effort in training allows for key bases to be overhauled and to serve as primary training facilities, instead of new recruits being sent to dozens of smaller sites around the country, each with significantly more limited resources. It also opens up space to house new soldiers, enable larger numbers to be moved around the country for construction or harvesting activities, and will give the regime the space needed to improve ongoing training of their vast paramilitary and reserve forces.

A small but important side benefit of this comes from better land-use policies. Efficiently arranged military housing and more reasonably designed training courses allows for more hectares of land to be used in farming instead of being wasted.

North Korea is rarely a mystery to those who pay attention. They broadcast their intentions in both official pronouncements from media and Party newspapers, and in their activities (which can be observed from satellites). As broadly worded as the official statements may seem regarding the two meetings, when you see the trend that has already been happening, those reports clearly reveal the state’s objectives to continue to improve their national defense abilities across the board as well as their agricultural and economic sectors.

The dual nature of North Korea’s domestic-military system has built a unique national structure that has enabled the country to survive for seven decades. The use of the military as “builder-soldiers” to construct everything from a modern skyline in Pyongyang to new ski resorts and to the reconstruction of Samjiyon, improves the domestic economy. Improvements to the country’s general infrastructure regarding communication, fuel supplies, and illicit means of sanctions avoidance enables greater military capabilities.

From threats of “Christmas gifts” to claims of new “strategic weapon systems”, the overarching policy directions proposed by Pyongyang are now reflecting what has already been happening under Kim Jong Un and ensure the establishment of needed “offensive measures for fully ensuring the sovereignty and security of the country”. To guarantee the sovereignty and security of the country, North Korea’s wider strategic position must be secured, no matter what happens diplomatically. Kim Jong Un’s refusal to ignore the less “sexy” conventional forces while also placing an emphasis on economic matters, seems to have placed North Korea in a secure position for the foreseeable future.