The Tanchon Hydroelectric Project is the largest hydroelectric project in North Korean history in terms of its complexity. Using a system of tunnels running for 60 km, it takes water from the Hochon River in Ryanggang Province (drawing from the Samsu Reservoir) and redirects it to the Tanchon hydroelectric generating stations in the small village of Sinhung, S. Hamgyong Province. Once completed, it will be the fulfillment of nearly a century of planning.

Construction of the enormous project began in 2017 and continued through 2018, but work began to slow down in 2019 and that has carried on this year, particularly at the generating stations, as this update reveals.

Tunneling work, on the other hand, appears to have made substantial progress. 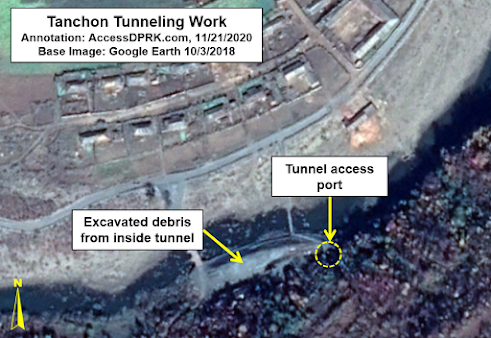 Near the end of 2018, you can clearly see one of the over sixty access points to the main water tunnel, where small sections of the tunnel are excavation. 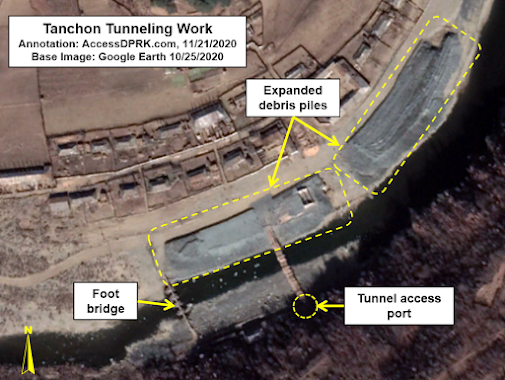 The two piles cover a total of over 6,400 sq. meters. While not every access point has piles as large, they have all grown substantially, giving evidence to the size of the main water tunnel.

Part of the project is the Sinhung Dam, located less than 2 km from the generating site. 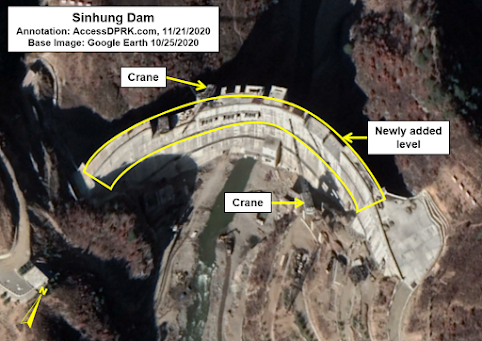 By Sept. 2019, the dam had two levels constructed. By Oct. 2020, only one full new level (level 3) had been built. Parts of a fourth level, one section on each end of the dam, had also been built, but the dam is still not complete despite it being of relatively moderate size.

In June 2020, Pyongyang Times reported that construction of the two generating stations was being "pushed dramatically" and that key parts of the project were entering their "final stages".  However, the last mention of the project occurred in August and only mentioned that new housing units had been constructed - something that can be verified by satellite imagery. 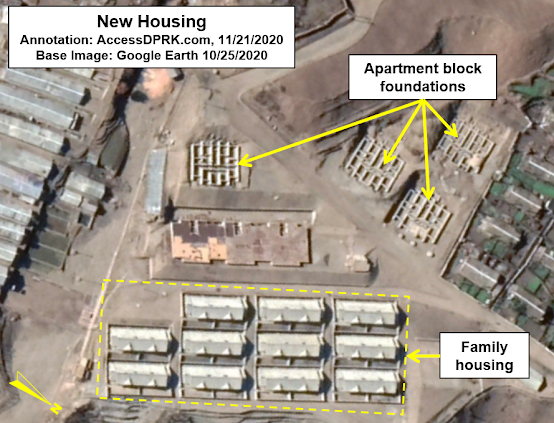 Taking a look at Power Station No. 1, the largest of the two generating stations being built at this site, not only can one see very little new progress since 38 North's review, but there has actually been little progress since 2018. 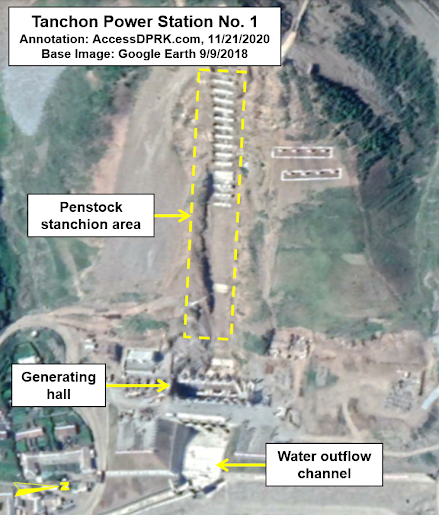 In 2018, only 100 meters worth of stanchions had been built and the generating hall was incomplete. 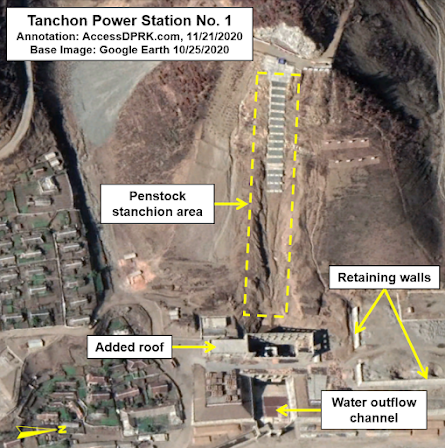 By Oct. 20, 2020 there hasn't been much new progress. The generating hall is still incomplete, although the roof of a small section has been added. Additionally, a retaining wall to the right of the generating hall was built. No new work on the stanchions can be seen.

Looking at Power Station No. 6, there has been a lot of progress since 2018 (when almost nothing existed), but little else new can be seen since Sept. 2019. 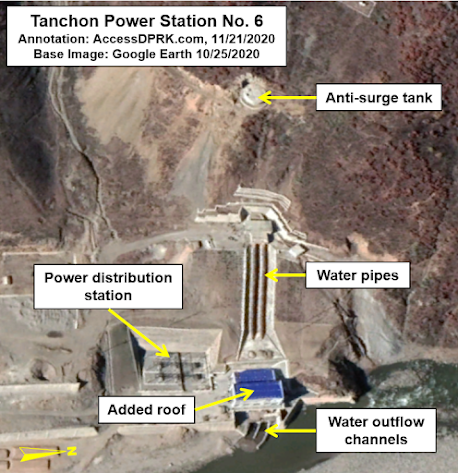 One of the most obvious changes is the addition of a roof over the generating hall. The outward appearance of Power Station No. 6 suggests that it is completed. However, it is unknown if the turbines and other equipment have been installed. Although, depending on their size, the turbines may indeed have been installed prior to the rood addition, and the power station could be ready to become operational.

Until Power Station No. 1 is completed, the Tanchon project won't be able to produce but a fraction of its planned capacity. The slight progress made in the last year could be due to several factors.

The year 2020 has been especially difficult for North Korea's economy, and they were forced to limit the number of projects of national importance from 15 down to just 5. The economic and trade effects of COVID-19 have become more pronounced, and it is likely that the virus has indeed entered the country. On top of that, three typhoons hit North Korea and caused severe flooding across the country, and exchange rates between the DPRK won and US dollar have fallen.

It's possible that the project will receive some added assistance as part of the flood recovery efforts in the region, but it is just as likely that it won't be completed for another year as other major projects (the Pyongyang General Hospital and the Wonsan resort area) have also blown passed their planned completion deadlines and are still under construction.

Posted by Jacob Bogle at 5:56 PM No comments: