Particularly after the famine of the 1990s, the Korean People's Army has been involved in a parallel economy aimed at helping to fund its own activities and to bring in foreign currency to support the regime overall.

The KPA has established shell companies and joint ventures, fish farms and fishing fleets, mushroom farms, construction organizations, operations to gain cryptocurrencies, and is involved in just about every other industry one can think of.

Peeling back the layers of fake company names, myriad alternative names for single enterprises, and trying to peer into the murky world of this parallel economy is a daunting task. But I would like to try to shed a little light on one of these military units that is not merely engaged in providing products for itself and the leadership but is also using its web of operations to engage in biological research that may not be so benign.

There are four main organizations that I am going to focus on that are known to be under Unit 810's control: the large KPA Farm No. 1116, the Sinchang Fish Farm, the Raksan Offshore Salmon Farm, and the Pyongyang Institute of Biological Technology.

The first is KPA Farm No. 1116. It is one of the most well-known military-controlled farms in the country as Kim Jong-un has visited it almost every year since he came to power. It is located next to the Ryokpo Palace on the southern outskirts of Pyongyang and has at least 386 hectares of land under cultivation (including greenhouses).

Based on construction visible on Landsat satellite imagery, the farm was established ca. 2004. The farm is used to test out experimental strains of corn, rice, sugar-reed, and vegetables. And around 2008 a mushroom farm was added that subsequently expanded in 2013.

The Ryokpo Palace is surrounded by the farm, so it's plausible that the farm also provides food for guests and staff at the palace. 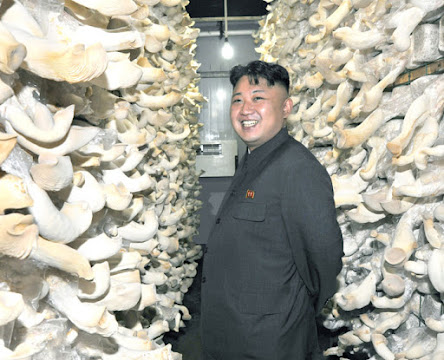 Kim Jong-un standing in a mushroom hall in July 2013, via KCNA.
The addition of a mushroom farm (built ca. 2008 and then expanded in 2013) is of particular interest as their trade with China and Japan has become an important source of foreign currency in the face of international sanctions and has helped to fund Kim's 'slush fund' that is used for everything from buying luxury cars to funding weapons activity.
Japan actually prohibits the import of North Korean mushrooms, but that hasn't stopped the government from trying to use pro-DPRK organizations in Japan to break the sanctions.
The mushroom farm at Farm No. 1116 has seven halls where a variety of mushrooms could be cultivated. Indeed, the cultivation is different types of mushrooms is an express purpose of the farm. According to state media, it is technically controlled by a second military unit, KPA Unit 534, but the facility is fully integrated with the rest of Farm No. 1116. and both units are responsible for producing foodstuffs and operating various enterprises.
While there is no open-source evidence that this mushroom farm is a source of illicit products, its position within the military's economic network means that it could easily be used to produce items for smuggling.
The main facilities of Farm No. 1116 were modernized beginning in 2017. The upgrade added 7,750 sq. meters of new greenhouses and a new production facility that covers approximately 750 sq. meters. The farm is also powered by two solar arrays that are a combined 3,600 sq. meters. 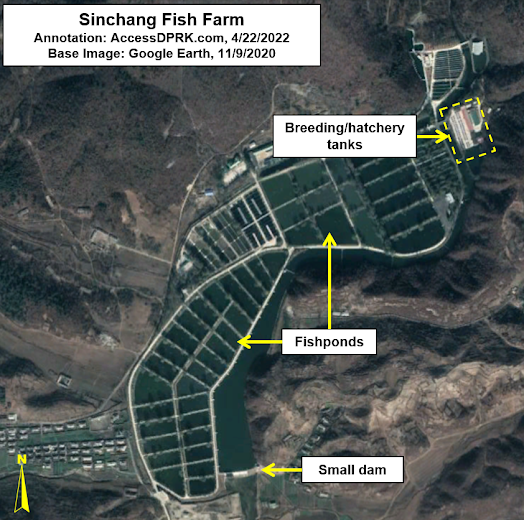 The Sinchang Fish Farm is located at 39.433883° 126.142233° and was constructed in 1997 based on Landsat imagery. It has undergone several rounds of improvements and now covers nearly 44 hectares. The fish farm's primary product is sturgeon.

Underscoring the farm's importance, a helipad was added in 2016 to facilitate visits from leadership, and Kim Jong-un is known to have visited in 2015, 2016, and 2019.

Production provides fish for the citizens of Pyongyang and to the armed forces. I haven't found official figures for its production capacity, but the fish farm is one of the largest freshwater farms in the country and is alleged to have an 80% survival rate for the fry. 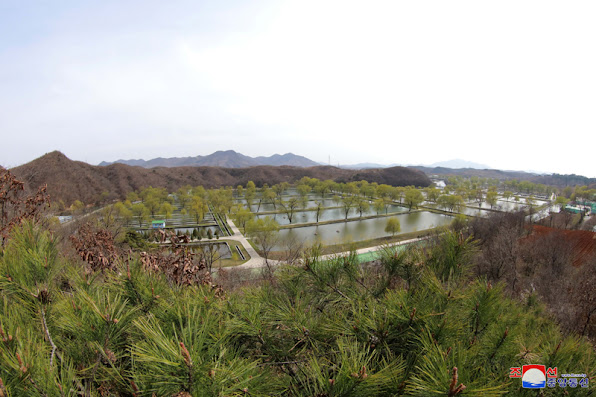 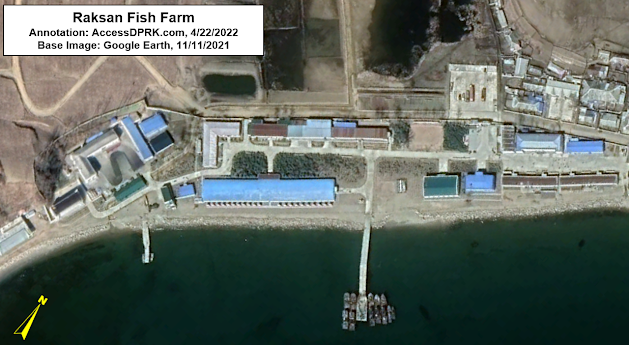 This image shows the various onshore production facilities of the Raksan Salmon Farm.

Based on satellite imagery, the farm operates up to 10 vessels, with the two largest being 30-32 meters in length, and that they use over 2 dozen net pens, typically divided into two main groups.

There's quite a large gap in Google Earth imagery, but some time between 2006 and 2014, the fish farm facilities were completely rebuilt.

The bulk of offshore production occurs in the local bay which is protected by a peninsula to the east and two islands in the south. A larger peninsula in the west forms the western boundary of the bay and helps to create the protected environment in which the farming takes place. 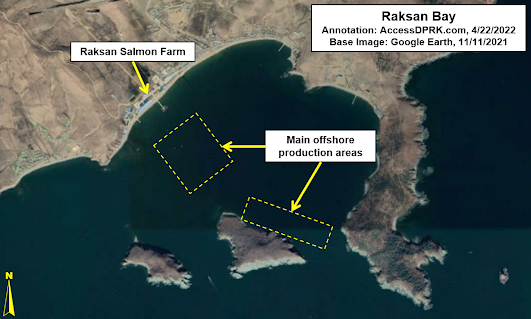 Lastly is a place that may not be as benign as fish farming.

The Pyongyang Institute of Biological Technology (평양생물기술연구소) is located next to the East Pyongyang Thermal Electric Plant on the southern side of the Taedong River at 38.969327° 125.692718°.

The Institute has been known by several other names over the years. The 'Aeguk Complex Microbial Center' was used from 1997-2010 according to the Nuclear Threat Initiative. In 1999 the Compound Microbe Technical Research Station was combined with the facility.

In 2011, the complex was expanded, more than doubling in size, and was described in official media as a vitamin C factory. Finally, its current name was introduced by the KCNA on August 30, 2013. 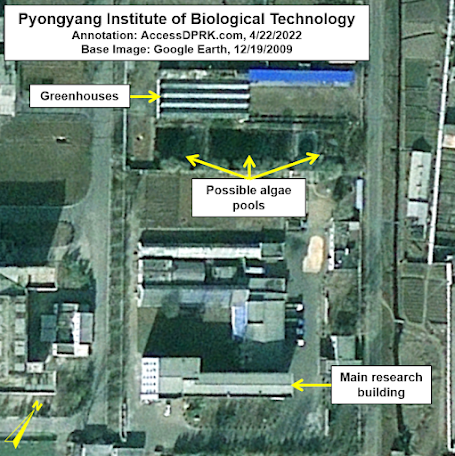 The original microbial center prior to reconstruction.
The original center with its main building, algae ponds, and greenhouses covered approximately 15,800 sq. meters.

Construction of the larger facility began in 2011. 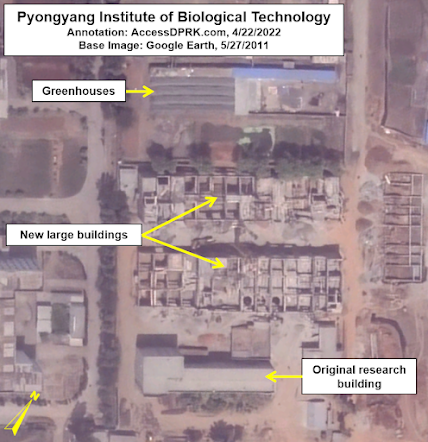 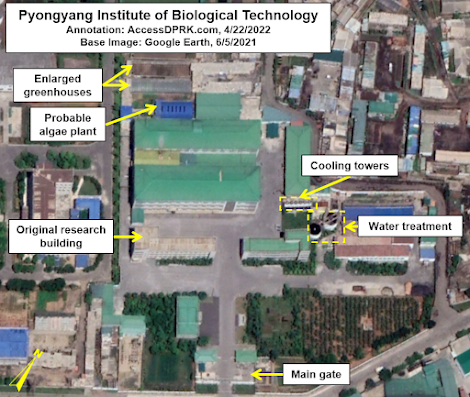 According to NTI, there are over 120 "microbial pesticide" facilities in North Korea. These sites produce the liquid microbial stock that is used in fertilizer supplements. This is a perfectly legitimate industrial activity (produced all over the world) and can help improve soil health without damaging the environment.

The problem is A) this site is controlled by the military and B) "equipment used for BW [biological weapons] production are often dual-use for agriculture, making external monitoring and verification virtually impossible."

Kim Jong-un toured the facility in June 2015 and the images released caused concern among weapons experts.

According to Hanham, claiming that a facility is for "insecticide" (or pesticide) production has a long history as a cover for biological weapons (BW) programs including the Al Hakan Facility in Iraq and the Soviet Union's Progress Scientific and Production Association which was tasked with the ability to convert between civilian and military use to produce BW during war.

The equipment seen in the images also showed that North Korea had managed to break sanctions and import equipment that had been banned.

North Korea's BW program has long been shrouded in mystery and it has historically been thought to be in a rudimentary state, even by US intelligence. Despite the proliferation of open-source information about Pyongyang's nuclear and missile programs, there still remains little in the way of concrete information regarding their BW program. North Korea proved to the world that they had an ongoing chemical weapons program through the assassination of Kim Jong-nam with VX nerve agent, but there are no known instances of the country using a biological weapon.

What is known is that North Korea has sought to develop BW and received samples of anthrax in 1968. It is generally assessed that Pyongyang does not have a comprehensive BW program complete with full-scale production capabilities and viable weapons, but that they have been researching biological weapons and continue to seek the ability to weaponize biological material.

The fact that this facility has the capacity to produce large batches of anthrax (if directed to) and that so much of the technology can easily be converted from civilian use to military, and, as Hanham went on to conclude "given North Korea’s history of BW research and the inordinate amount of expense and risk taken to import the banned equipment when they could have imported the pesticide itself without restriction, it is likely Pyongyang intends to use the facility in a similar way" to other dual-use facilities like that of Al Hakam, it is probable that North Korea uses the Institute to maintain a latent biological weapons capability.

I would like to thank my current Patreon supporters: Amanda O., GreatPoppo, Joel Parish, John Pike, Kbechs87, and Russ Johnson.