What Lies Beneath the Underground Republic

The internal workings of North Korea largely remain a secret to many in the world, and even Western intelligence agencies have bemoaned the relatively sparse amounts of information that flow out from the DPRK's borders. It's even suspected that the United States has no more than two or three low-level spies in the country - if there are any at all. This means that one of the main sources of information about this "hermit kingdom" comes from what can be gleaned through a vast array of satellites.
One thing that becomes clear from these spies in the sky, is that North Korea has a fetish for digging.

During the Korean War, Kim Il Sung and his army witnessed the terrible and far-reaching ability of the Allied air forces to knock out military and economic targets from the sky. The northern part of the Korean Peninsula had been turned into Korea's industrial and most developed region by Japan during their 35 year occupation, but by the end of the three year Korean War, upwards of 85% of all buildings in North Korea had been completely or partially destroyed. The Korean War saw more tonnage of bombs dropped than in the whole of the Pacific Theater of WWII.

Kim Il Sung's expectation that Korean War II was imminent, and based on the lessons he learned during the first war, led to him commanding that the whole country be fortified, saying in 1963, "we must dig ourselves into the ground to protect ourselves".
The practical results of this are the countless miles of trenches along nearly every hill, a coastline ringed with artillery positions and anti-invasion obstacles, the second largest combined military and paramilitary force in the world, and lots and lots of tunnels, bunkers, underground factories, and other sites constructed beneath the surface and out of view.


At this point, I want to sound a note of caution to those who like to let stories of North Korean mysteries run away with them. There has been plenty of speculation about the true extent of North Korea's underground infrastructure, with some going so far as to claim that most of their military bases are actually buried beneath the ground. The truth is, while both small and vast underground sites exist across the country, commercial satellite images do not support the idea that there's basically a parallel country underground.
Military sites are easy to find if one knows what to look for and reviewing current and historic satellite images only reveal underground sites at some of them, and most of those are relatively small.  The only way you could claim that most bases have an underground facility (UGF) is if you include small storage bunkers or gun emplacements that are situated a few meters into a hillside. But I don't accept the definition of an "underground facility" as merely being "any usable structure with an inch of dirt on top". For the purposes of this article, UGFs are a sizable structure built into the ground, where the rock cover would provide meaningful protection from bombs and missiles.
Aside from military sites, major factories with UGFs are likewise easy to spot. I have looked at every square meter of the country more than once, and the 2021 AccessDPRK Pro Map is swollen with over 13,000 distinct military-related sites plus dozens of factories with an underground component. However, to reiterate, I haven't seen anything in commercial satellite imagery that convinces me there is a nationwide system of connected tunnels and underground sites. 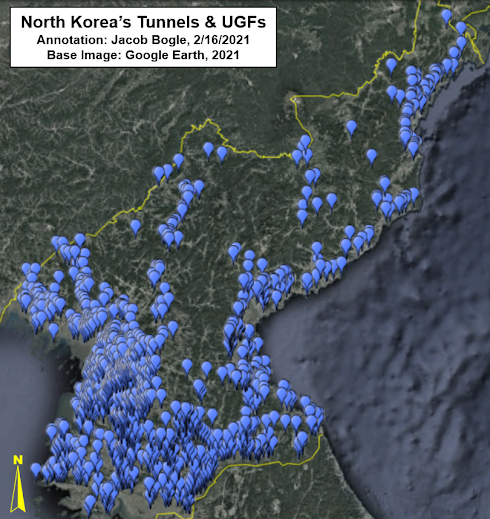 Based on the AccessDPRK 2021 Map, Pro Version, the country has over 1,500 identifiable tunnels and underground facilities.
The sheer number of these sites overall is a little mind-boggling when you consider how relatively small North Korea is. The above map shows each of the 1,500+ tunnels and important underground facilities that I have managed to locate, as well as coastal batteries that have a clear underground component. It doesn't show the 850 hardened artillery sites, 492 drive-thru bunkers, or other installations that only have small access tunnels. The total number of large and small UGFs (which includes artillery sites and small storage areas) is estimated to reach as high as 14,000.
Some sites were clearly constructed decades ago and were either abandoned or serve as emergency facilities in the event of open warfare. Because of this, their entrances have become overgrown with vegetation and that can make identification difficult. Furthermore, others have indeed been abandoned and mining operations or other domestic activities have encroached on the site; I saw little need to map those.

There are also scores of stories about secret underground escape routes that connect Pyongyang and major palaces with underground rail lines that would allow the Kim family and top officials to be spirited away to the far north of the country, and even to China.
According to a 2015 report, the US military has mapped 6,000 to 8,000 of these "VIP" underground sites that North Korea's leadership could use to either hide or escape the country. The vast majority of them, however, would be simple bomb shelters (something that is common in South Korea, too). And, while this report lends credence to the idea of large, interconnected networks of underground facilities, the problem is that there is almost no direct visible evidence in the public sphere for such a massive system (although smaller tunnel segments have been identified). Additionally, this system is for the country's top leadership and isn't part of the normal domestic and military infrastructure of the country. So, this article is only going to focus on other underground infrastructure that plays a more "daily role" in the country.

While the exact purpose of each and every one of the sites is impossible to ascertain by simply looking at them from the air, most tend to fall into a handful of categories. There are a few major underground facilities, such as the Punggye-ri Nuclear Site, the Panghyon underground aircraft factory, and Kim's hardened helicopter base (which is part of a much larger underground command and control base). Most of the others can be classified into these: the underground factory or laboratory, the unspecified underground facility (many with protective berms at tunnel entrances), underground facilities at Navy and Air Force bases (excluding HARTS and storage bunkers), and basic tunnels (either individual tunnels or usually in groups of three).

The following set of images shows examples of various types of underground facilities. The satellite images used cover a large range of dates, but they were chosen because they best showed the sites in question.

The Hagap Facility in Chagang Province (40.081644° 126.189346°) is an example of a major underground site. Its exact purpose is unknown, but the two main theories are that it's either part of North Korea's nuclear program or a secured storage site for important government archives. Construction of the site has been ongoing for decades, punctuated by periods of inactivity, but since 2016, work has been steady. 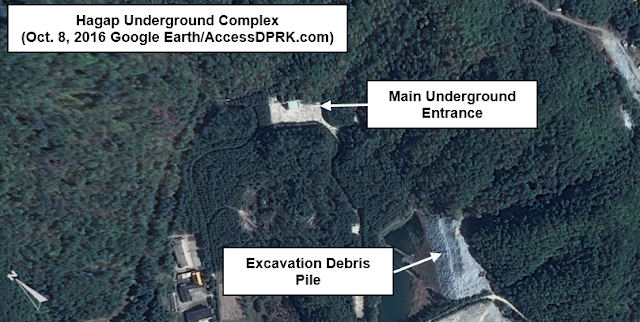 Ryoho-ri Underground Naval Base (39.876051° 127.785328°)
This is a submarine base and the headquarters for the East Sea Fleet. It is one of 13 naval bases that have an underground or hardened facility. Ryoho-ri has two underground entrance points and suggests the existence of a large underground facility at least 300 meters in length and that could likely extend a further 150 meters into the hill.
Ryoho-ri is so important that Kim Jong Il had a villa built nearby and both the villa and base have special rail access. 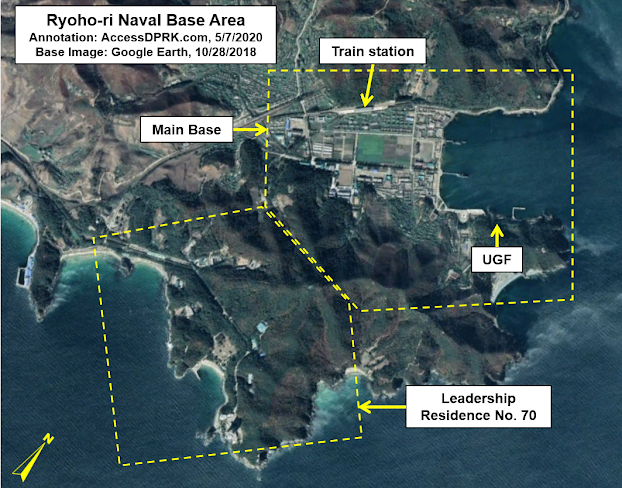 Pukchang Airbase (39.512137° 125.958563°)
Pukchang is one of 22 airbases and heliports that have associated underground facilities. I've already written about two of these in detail, the Sanghung-dong VIP Heliport in Pyongyang and the Kangda-ri Airbase near Wonsan.
Pukchang is home to a Mig-23 fighter wing and has three main underground entrances into Obong Hill. It is also adjacent to the Yonggang-ni Helibase which has its own small UGF.
Such facilities are used to store important aircraft and equipment, conduct maintenance, and at some airbases, even engage in manufacturing parts.

Tonghungsan Machine Plant (39.953611° 127.546918°)
Located in Hamhung, this is a major underground factory and is associated with North Korea's arms industry. Beginning in 2016, major reconstruction work began on both the underground portion and the external buildings. This reconstruction kicked off a series of new building and renovation projects at multiple arms facilities around the city including the Chemical Materials Institute and at the Hungnam Fertilizer Plant which produces chemicals used in various programs.
Depending on Tonghungsan's exact size and layout, parts of the factory could be protected by over 150 meters of rock. 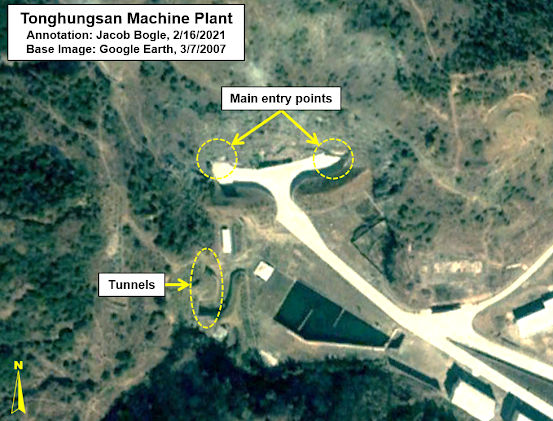 Taedonggang UGF near Pyongyang (39.174538° 125.946416°)
This is underground facility has a publicly unverified purpose. Located 6.5 km across from the Kangdong Residence on the other side of the Taedong River, it consists of four entrances divided into two sections. Tunnels 1 and 2 appear to be more for underground storage, while the size and configuration of the road and tunnels 3 and 4 suggest that they're for larger equipment (possibly TELs and MRLs).
Based on rough calculations of the volume of the spoil piles, there is at least 40,000 cubic meters of interior space for tunnels 3 and 4. That's the equivalent of a room 63x63 meters in size with 10-meter-high ceilings. The existence of a gantry crane and dedicated electrical substation can also clue us in to what purposes the site may be used for.

Pyongyang Armed Forces District UGF (39.059308° 125.733921°)
One of the largest identified underground facilities is beneath a hill in the middle of Pyongyang. One of the oldest entrance points is located at 39.059308° 125.733921° and is next to a secured villa. The tunnel can take VIPs into the facility that occupies a large portion of the hill or across the hill to the Sanghung-dong Heliport, where six helicopter hangars are protected by steel blast doors and hardened walls.
Roughly 660 meters northeast from the original entry point is the newest entrance. It was added in 2017 and can take important people from an assembly hall directly into the UGF.
This Armed Forces District UGF is one of multiple hardened command and control facilities within the city.

While North Korea's engineers are capable of constructing large underground factories, they're still limited by the technology, education, and other factors that they have access to. North Korea is well known for their "speed campaigns" and for constructing large projects rapidly. Lack of enough materials due to sanctions and additional factors means that some of these projects end up shoddily built, with problems arising often and even occasional building collapses. These failures can also extend to military sites.

The following site is a coastal artillery position in North Hamgyong Province (41.896007° 129.950076°) that suffered a collapse, largely destroying the site.

Area before the collapse. 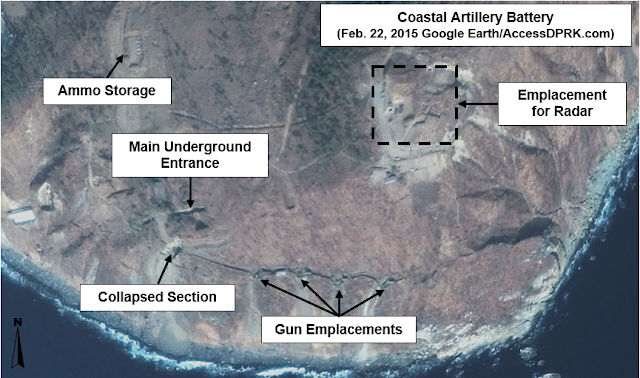 Area after the collapse. 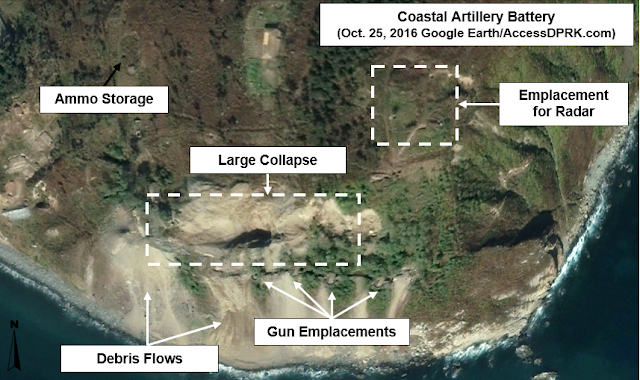 North Korea built one of the deepest subway systems in the world, and they have a history of building underground facilities not only within their own borders but also around the globe.
These places aren't just for hiding weapons or keeping the Kim family safe. Four massive tunnels that traversed the DMZ into South Korea are known about and some estimate that fifteen to twenty others could exist. Such infiltration tunnels could enable an invasion into South Korea with tens of thousands of soldiers and vast sums of equipment without warning.
From infiltration tunnels to escape routes 100 meters underground to new UGFs at ballistic missile bases, the difficulties in discovering this underground infrastructure and combating its ability to hide people and weapons present a continuing obstacle to intelligence. It may also provide a potentially unacceptable level of uncertainty regarding any offensive strike against the country by the United States or South Korea, as they may not know where each target person is exactly or if every nuclear bomb or technological site was hit.