This image is an example of the domestic sites using the real icons in the map.
I started mapping North Korea in late 2012, released the first completed map in 2017, and began to remap the whole country in 2018. I wanted to keep track of changes, fix any old mistakes I came across, and to look for things that may have been missed during the initial phases of the project.
The combined result of roughly 7,000 hours of work is this 2021 free version. It contains over 61,000 places that are divided into three main categories: monuments, military, and domestic. Those are further broken down by province to give a more granular look at the country.
During the remapping process, I came across hundreds of places that had been mapped in 2017 but now no longer exist (mostly things like propaganda and town signs), so the true difference between the 2017 and 2021 versions comes to about an extra 8,500 places. Additionally, there were some categorization changes, new descriptions for hundreds of locations, and other changes.
This Google Earth map is the most comprehensive look at the country freely available to the public. With some variation, there are 38-40 individual item categories in the domestic and economic section (everything from mining locations to irrigation pumping stations to factories and museums, schools and border security), and there are around 20 item categories in the military section. This has air defense sites, military bases, storage facilities, radar sites, etc.
The monument's section is divided into Towers of Eternal Life and "others". Those include everything from murals to "On the Spot Guidance" memorials and everything else.
There is also a "nationwide" folder that is not divided into provinces but that holds all of the same type of place within single nationwide folders. The places in this section are: Historic Sites, DPRK Missile Bases, Prisons, Children's Traffic Parks, and Border Crossings (current and former).
A note on the process of making this. As I have mentioned in previous blog posts, this project has been created by myself. I have no staff and no regular financial backing other than my great Patreon supporters. I have used what public information I could find in a reasonable amount of time (I can't read everything that comes out about the country), as well as my own experience to build this database.
I drew from older databases, books, government reports, western media, official North Korea media, think tank papers, conversations with knowledgeable people, and even sites like Wikipedia to help create it.
It is based on open-source information and geared toward English language readers. The Free and Pro versions have different levels of sourcing, but I almost exclusively stuck to English websites if I felt a location needed a link for reference. That means lots of places don't have links and many others don't need one at all.
For example, this is an anti-aircraft artillery battery. There is no need for some declassified document giving out the coordinates for this individual place. It is what it is, and there's around 1,500 of them. 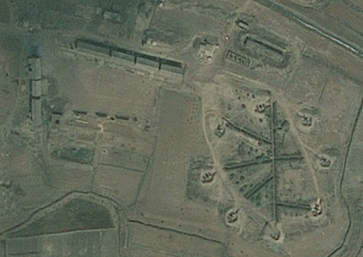 As I said, not every place with a name will have a link. But for every place that does have a non-generic name, that name came from a source. Some of the locations were marked years ago, some were only marked within the last few months. Some online sources no longer exist, others have been archived. And other additional online sources may well exist, but if I don't know of them, I obviously can't add them.
I am not aware of any major, public database on North Korea that provides a citation for every single site (not even in cases when they're named and given other details). Sometimes the information comes from private discussions with defectors, other times it's drawn from old documentaries or DPRK media that no longer exists online (YouTube has conducted multiple purges of videos from official sources). In the process of creating this, I relied on established and trusted sources.
If multiple sources say there's a missile base near Anbyon but with no specific coordinates, and I find a site with several indicators suggesting a site near Anbyon is a missile base, then that place will be marked as a potential missile base. If a building looks exactly like other known buildings, then it's going to get identified as that type of building (primary schools are a great example of this).
This is a good faith, open-source project. Nothing more, nothing less. And out of over 61,000 places, errors probably exist. I do not guarantee that it is inerrant. Indeed, honest mistakes popup all the time, everywhere. I am trying to add to the world's available knowledge of the country and to seek the input and cooperation of others in filling in any holes or fixing mistakes. If you have any specific questions, feel free to ask.
Free Version Download & Operation
Here is the direct download link. The file is hosted via Google and is a little less than 5 MB in size. A new page will open and all you have to do is click the download button.

Simplified download screen. Yours may look different based on your browser.
If you're not familiar with Google Earth, it's pretty simple. Once you download the file, all you have to do is expand the menu (the little right-side arrows) to show the main sections. Pick one and expand it, decide which province you want to look at and expand that folder, and then pick the item(s) categories you're interested in. If you want to look at all of a particular site for the whole country, just click on each of the files within the various provinces. 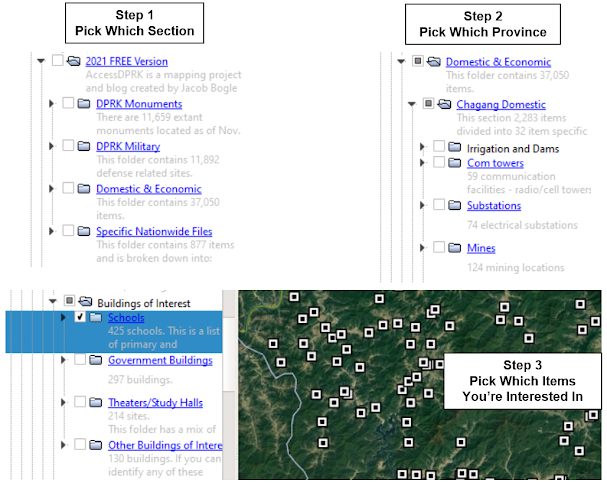 Pro Version
If you're interested in the Pro Version, this page has a lot more information. In short, it contains over 3,100 additional places and over 2,600 other sites have extra bits of information such as links, construction dates, purposes and capacities, etc.
For those interested in professional research or commercial/media interests, the Pro Version may be right for your needs.
Copyright Information
Aspects within the Free and Pro versions of the file may be subject to copyright and intellectual property rights enforcement under United States' law. No part of either version of the file may be used for commercial purposes without the express written permission of Jacob Bogle. This includes but is not limited to: use in contract bidding or fulfilling contracts for private or government interests; use in creating articles, films, maps, graphics, or other content for a profit-based entity; the creation of any map, dataset, or GIS product on a website or app that requires paid access to use that website or app.
I would like to thank my current Patreon supporters for their continued support: Amanda O., Anders O., GreatPoppo, Joel Parish, John Pike, Kbechs87, Planefag, and Russ Johnson.
--Jacob Bogle, 2/1/2021
AccessDPRK.com
JacobBogle.com
Facebook.com/accessdprk
Twitter.com/JacobBogle
Posted by Jacob Bogle at 2:40 AM