North Korea's coasts are littered with defensive positions, a hodgepodge collection of modern defenses mixed with those remaining from the Korean War.

Their design takes a layered approach and is dependent on the topography of the area. Naturally, locations closer to the DMZ and those along the eastern coast (facing the historical enemy of all Korea, Japan) are more built up. To the southwest, the land border between North and South Korea gives way to a series of river mouths and tidal inlets, most notably at the confluence of the Imjin and Han rivers. This area opens up to the sea and is where I consider the North Korean coast in this region to being.

Within 3 miles of the Northern Limit Line (the de facto maritime border between the two countries, although it is disputed) are a series of observation posts located along the river banks, fences to the rear of the posts, a number of sand berms which divide up the patty fields, successive layers of road blocks/tank traps, and mixed throughout are anti-aircraft artillery sites (AAA), gun lines, trenches dug into the hills, and hardened artillery sites (HARTS). There are also ammunition caches and other storage facilities dispersed throughout.

Here is a sample region. 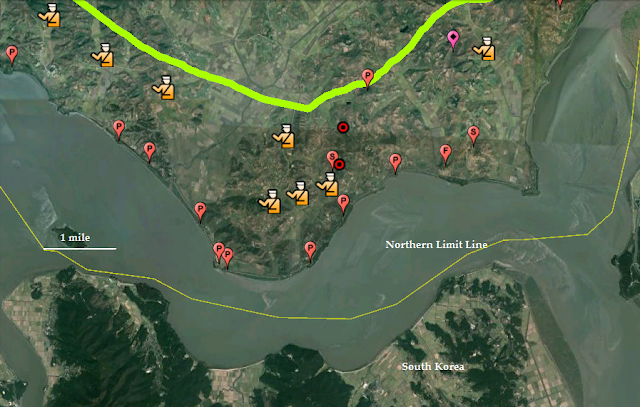 The Northern Limit Line runs in the middle of the river, naturally South Korea is to the south. The wider yellow line is the area I have marked as encompassing most of the border defenses which include the DMZ. It is approximately 3 miles (with some variation) from the NLL and the Military Demarcation Line which serves as the land border. The "P" icons are small position, observation posts etc. The red circles are HARTS positions, the "S" icons are storage facilities, "F" is for fortifications, the pink icon denotes bunkers or tunnels and the "policemen" mark road blocks of the type I discussed in this post.

Here is an example of the sand berm and fence which runs the length of this region (as well as nearly all low-lying coastal areas).

To the north of this beach, in an area about 5 miles wide, there are 8 road blocks.

Now, moving away from the NLL here is a map of some of the small coastal positions located along the coast of South Hwanghae province. 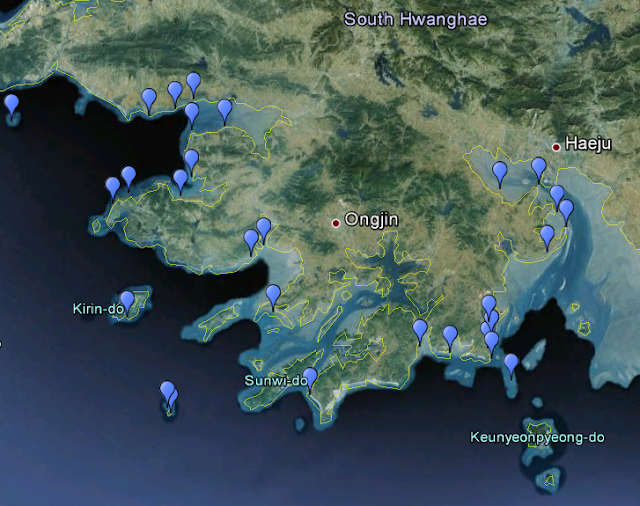 The island to the bottom right, labeled Keunyeonpyeong-do (also known as Yeonpyeongdo), is the South Korean island which was bombed by the North in 2010 which killed 4 and wounded 18 others.

This is a close up of one of the larger positions. 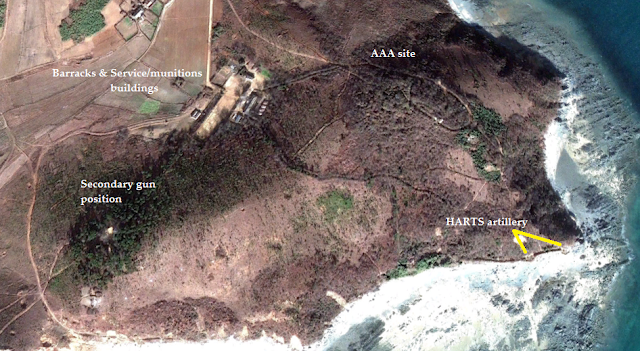 Literally thousands of miles worth of trenches can be found throughout the county. Some are left over from the Korean War and have no real use, but others are part of their active defenses. Like these:

Both east and west coasts are intermittently lined with obstacle courses aimed at preventing any rapid movement inland during an invasion. These "dragon's teeth" consist of row after row of concrete blocks which have been sunk into the sand. The rows, usually 10 running parallel to each other, make up a full "band" around 100 feet wide. Most of these were put in place decades ago, some have been removed and others still have simply been covered up with drifting sand and mud. Still, in some areas they would slow an advancing force. They tend to be found in low-lying areas which lack mountainous terrain within a few miles of the coast and they are often paired with road blocks and berms further inland as well as rows of berms along the beach itself.

In this example the obstacle band has been marked in red, you can see the multiple sand berms in nice little rows. And a close-up of the dragon's teeth themselves: 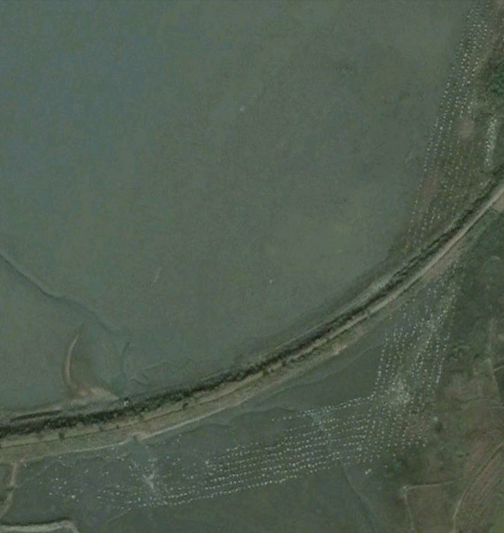 Next is the defensive positions around a few coastal towns. If you look at the coastal defense map I gave you above, this area is roughly the 4 blue places marks in a cluster, to the north of Yeonpyeongdo Island. 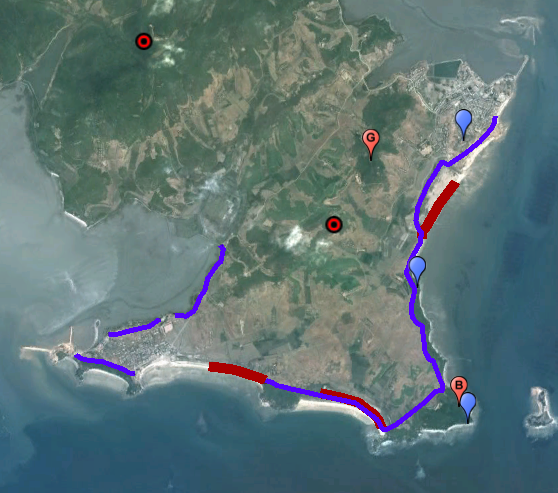 The blue lines are fences and the three red lines are the tank traps. As before, the red circles are HARTS, the blue marks are small positions, "G" is a gun line and "B" is a coastal battery.

Finally, these are just three additional images of some interesting coastal places:

An AAA site with trenches - 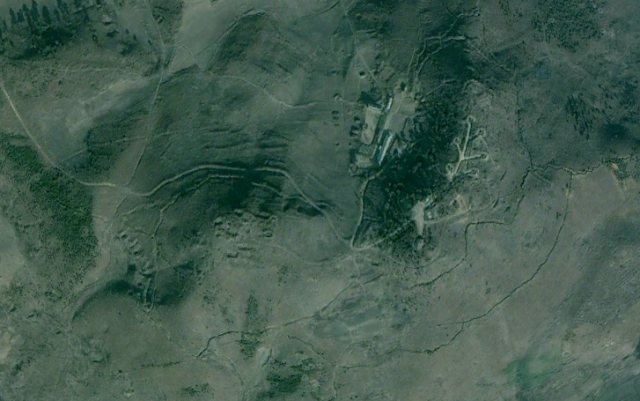 A close-up of a hardened artillery site - 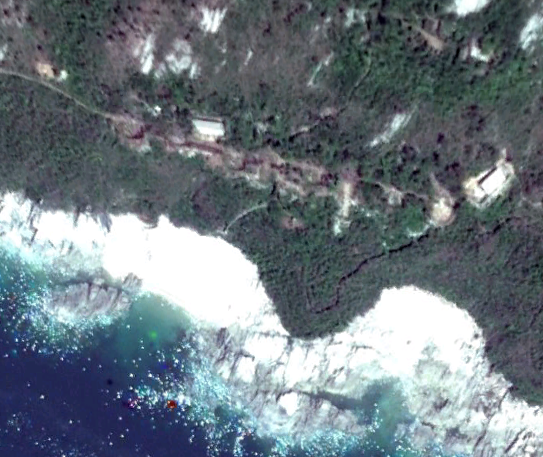 And a reserve fleet of 10 ships. There are a number of these types of locations dotted around the coast. Some are just sitting in dry docks like these and others are actually housed in underground naval yards. 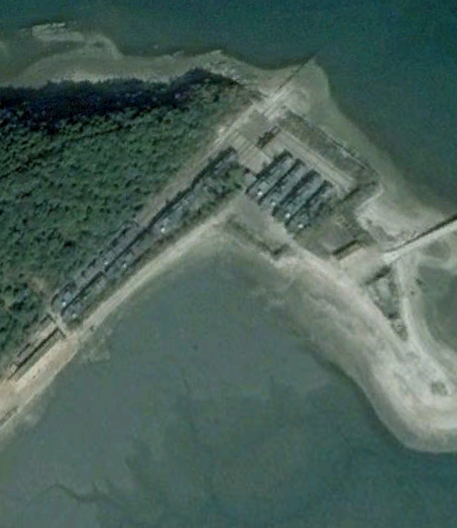