Pollution and health risks exists at every point along the nuclear weapons’ development chain, from the initial mining and milling operations to the enrichment process, and finally from testing nuclear devices. In this two-part series I will examine each of those areas and the health risks associated with them.

In this first part, I will give a short introduction to the history of North Korea’s nuclear program and then discuss the health risks found within the uranium mining and milling process and the production of nuclear fuel. (Read Part II here) 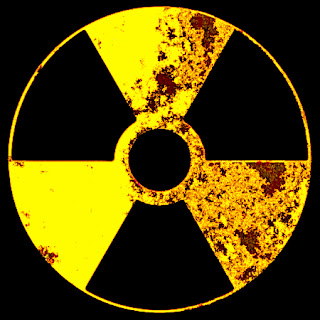 Introduction
North Korea can trace its nuclear program to soon after the Korean War. After the war’s total devastation, Kim Il Sung vowed that the country would never again be flattened, and he sought Soviet assistance in creating Pyongyang’s own nuclear deterrent. Marshall Stalin and future Soviet leaders weren’t too keen on Kim’s aspirations initially, but they did offer help with the development of nuclear power and signed a nuclear cooperation agreement in 1959. Never one to let an opportunity go to waste, Kim Il Sung ordered secret research into building the A-bomb.

Yongbyon, North Korea’s main nuclear research center, was constructed in the 1960s with help from the Soviet Union. Further facilities across the country were constructed that were needed to mine the uranium, mill it, and finally, to enrich it. The country has two known milling facilities, one at at Pakchon and Pyongsan, and around dozen suspected uranium mining sites. Pakchon and Pyongsan process low-grade coal to concentrate the uranium naturally found within it (at relatively low concentrations) and then to turn it into yellowcake where the uranium concentration reaches 80%. From there it is sent to additional facilities including Yongbyon, some of which have likely not been declared by North Korea to the international community.

Mining and milling
North Korea is one of only seven countries that are not signatories to the International Labor Organization. This United Nations agency sets international labor standards, including those for nuclear research and industry. Furthermore, the country’s mining sector is notoriously dangerous and lacks modern safety precautions and necessary equipment. Injuries and respiratory diseases are common, particularly in coal mines which is where North Korea gets the bulk of its uranium. The country’s two largest uranium mines, Pyongsan and Woogi-ri (within the Undok-Rason area), hold an estimated 11.5 million tonnes of ore and employ thousands of workers.

The inhuman treatment of workers at Pyongsan, and severe negligence regarding monitoring radiation exposure and air quality was given in testimony by Dr. Shin Chang-hoon before the U.S House in 2014.

Once the ore leaves the mines, it is transported to the milling plants to be converted into yellowcake. Even though coal itself is generally considered safe to handle, every form of uranium extraction leaves behind dangerous waste.

According to the United States Environmental Protection Agency,
"regardless of how uranium is extracted from rock, the processes leave behind radioactive waste....The tailings remain radioactive and contain hazardous chemicals from the recovery process." 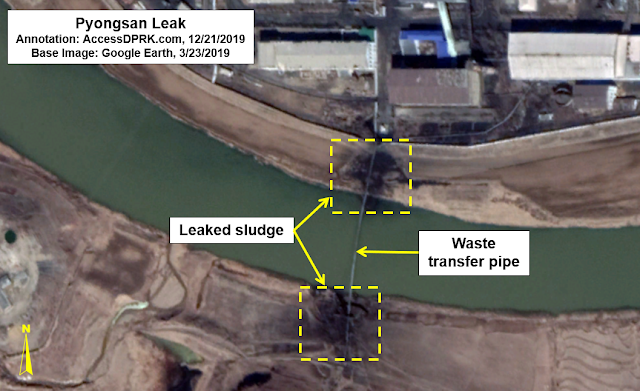 Google Earth image showing the residue of leaked waste material at both ends of the waste transfer pipe.

The Pyongsan milling plant is a prime example of the environmental damage done within North Korea’s nuclear sector. Satellite imagery shows that the country’s primary milling facility has been spilling industrial waste into the Ryesong River for decades, and that the waste material reservoir is unlined. This can allow contaminated water to seep into groundwater supplies and also contaminate crops. Hundreds of thousands live within the area of Pyongsan and downriver of the plant.

Non-proliferation expert Dr. Jeffrey Lewis summed it up nicely in 2015 when he said, “What is definitely happening, though, is that North Korea is dumping the tailings from the plant into an unlined pond, one surrounded by farms. That’s not a hypothetical harm.  That’s actual pollution that is harming the health and well being of the local community."

At Pakchon, which began uranium milling around 1982, a former waste reservoir is now covered in cultivated land. This practice can be seen at many mining and industrial sites. If the waste isn’t properly covered, any crops grown over this material may become contaminated with heavy metals such as vanadium and chromium, as well as lead and arsenic. Those contaminates are passed up the food-chain into animals and humans.

Image showing that a former waste reservoir is now farmland and the plant’s proximity to a river.


According to defector Kim Tae-ho, who worked at Pakchon in the 1990s, when the “experimental plant” would operate, yellow smoke would fill the plant and cause “severe difficult breathing and unbearable pain.” The short-term effect of inhaling yellowcake particles is primarily kidney damage which will resolve itself unless there is recurrent exposure (such as from working at the site each day). However, the main radiological risk comes from the radioactive gas radon and its non-gaseous “daughters” like polonium-218. Improperly vented air can lead to a build up of these radioactive materials and will cause immediate tissue damage to the lungs and mucus membranes. Additionally, the use of acids in the production process raises the risk for inhalation of sulfur-containing gases (which can have a yellow tint to them) and cause irritation and eventually burns to the eyes and lungs.
Pakchon and Pyongsan are combined mine and milling facilities, but illnesses and food contamination have been reported at stand-alone mines as well, such as at the Walbisan uranium mine (near Sunchon).

Sources told Radio Free Asia that, “local residents are forced to eat radioactive food and drink radioactive water,” and “[i]n Tongam village, the miners and their families suffer from incurable diseases or various types of cancer. In particular, many people die of liver cancer.”

Even within the uranium enrichment compound, almost every inch of available land has been cultivated.

The next steps along the nuclear development chain happen at Yongbyon. The complex exists as a closed-city and people are not free to enter or exit without permission. Scientists, engineers, and others may work for many years within the fenced off complex. They will marry and will raise children.

While being able to work within a prominent field brings many benefits, it also brings risks. Brief exposure to radiation is rarely dangerous. Short exposure risks are also not catastrophic when it comes to inheritable genetic damage, either, as the world learned from the survivors of Hiroshima and Nagasaki. But continual exposure because you’re living in a contaminated environment increases those risks each day. This concern grows when you consider that in recent years, dozens of new buildings have been constructed with room for thousands more residents.

Scientists who were involved during the early days of Yongbyon’s operation have been reported to have suffered from wasting illnesses and hair loss.

Fast-forward to 2019, a former resident of Yongbyon told DailyNK,
"In other districts it is very difficult to find people with cleft lip but here there are many individuals with crooked mouths, those lacking eyebrows, incidents of dwarfism, and those with six fingers. There are even children who just look like bare bones."

Adults can also be affected, with the most severe cases eventually causing mental deficiencies, cancers, and wide array of other illnesses at relatively young ages.

The aforementioned Dr. Shin Chang-hoon also interviewed a defector who worked at Yongbyon. He was told that the dosimeters (which measure radiation exposure) were only checked every three months and workers were not told of the results unless they had already begun to exhibit signs of radiation sickness. 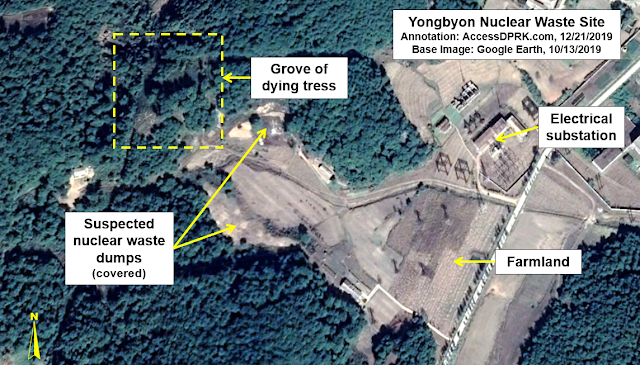 Adjacent to an area of improperly stored nuclear waste is a grove of dying trees and farmland. It is only separated from the waste by a covering of dirt.

Improper disposal of radioactive materials can pollute the soil, kill trees, and contaminate any food that is grown in the area. Releases of gases into the atmosphere will likewise blanket the region and small, aerosolized particles will eventually make their way down to the ground, bringing with them radiation or forming toxic compounds. These gases can travel for many miles and place other sites within North Korea at greater risk, not just the immediate Yongbyon complex.

Concern over Yongbyon is especially grave considering the large number of nuclear and chemical facilities in such a small area. Not just in terms of ongoing dangers that defectors have told the world about, but also in terms of a future accident, flood, or fire that could devastate the region and require international intervention to solve.

The fact North Korea is largely cut off from the world and often must rely on outdated science, manufacturing techniques, and potentially unreliable indigenously produced parts and equipment means that the risk of accidents and errors is greater than in other nuclear countries. It is something of a small miracle that a large-scale incident hasn’t already occurred.