Keeping an eye on every aspect of North Korea, be it their nuclear sites or more mundane things like gas stations, is the only way we can create a deeper understanding of what's happening within the country despite the limited amount of official data coming from Pyongyang.
Regardless of sanctions, North Korea's domestic economy continues to grow ever so slowly and taking a look at the transportation sector helps to shed light on this growth.

As the economy rebounded after the famine and subsequent economic collapse, market activity helped spur greater internal travel for trade and even domestic tourism (something that was largely absent for much of North Korea's history). Private car ownership is still rare, but the streets of Pyongyang and other major cities have steadily filled up, with the occasional traffic jam even being seen. Taxi services, buses, motorcycles, and private transportation companies (typically not entirely legal) all require one major commodity to function: fuel. 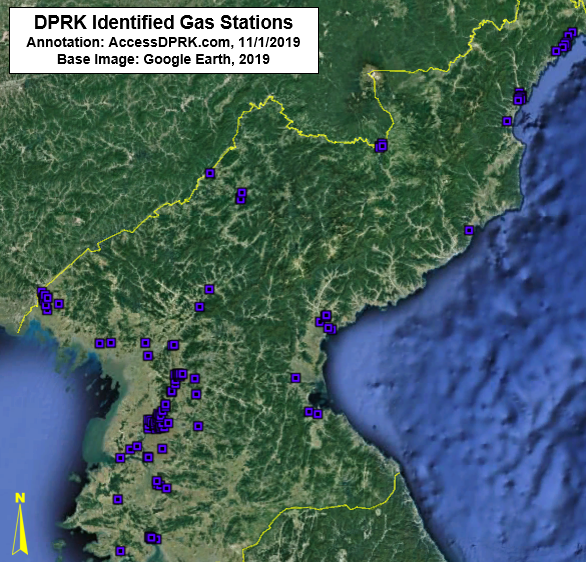 National map of the 113 gas stations I was able to identify.

South Korea has approximately 11,800 gas stations. With half the population, North Korea might be expected to have half the number of gas stations: 5,900. After looking at every major town and highway, I was only able to identify 113 gas stations in all of North Korea. However, while that number may be small, it actually speaks to the fact that vehicle ownership, mass transit, internal travel, and the domestic economy have all undergone rather significant changes under Kim Jong Un, as over half of those gas stations have been constructed since he came to power in Dec. 2011. 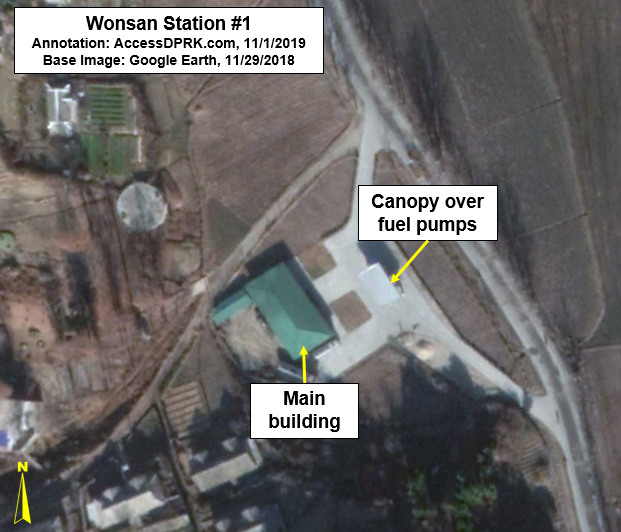 Wonsan gas station "Number 1". Despite the city's importance, I was only able to find three stations. 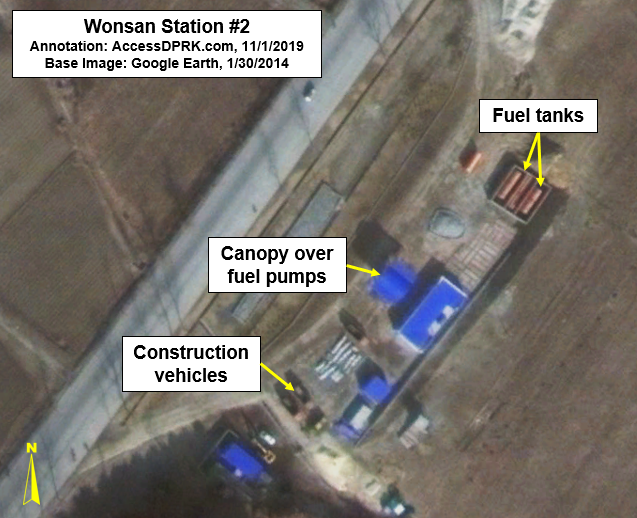 The need for and consumption of more refined petroleum raises its own set of questions.
Based on measuring the fuel tanks at the second Wonsan station pictured, if we make these few assumptions, that each of the 74 identified stations built in or after 2012 were indeed operational and each held two uniform-sized fuel tanks, and each one was refilled once a month, then that equals an annual consumption of 15.2 million gallons for those 74 stations. That added consumption equates to an additional 363,000 barrels of refined petroleum product above what North Korea was using under Kim Jong Il and above the annual import limits in place through sanctions. United Nations' reports and various countries all accuse North Korea of violating the sanctions regime. The expansion of gas stations suggests that advanced sanctions evasion practices are how they have been able to keep their gas stations full and their cars fueled.


For a more detailed report, please see my article at NK News Pro.

Patreon Special Access
Patreon supporters at the $20 tier are entitled to exclusive data sets. The Google Earth file for this post is one of those exclusive offers. This is the only nationwide map of the country's gas stations that I am aware exists. Please consider supporting me on Patreon and get access to the details behind this survey and other exclusive information.