On August 8, 2019 I wrote a post about highly visible leaks at the Pyongsan Uranium Mine and Milling Factory. In the post are satellite images that clearly show waste leaking going back to at least 2003.

Despite the other things that I have been able to show through the #AccessDPRK project, this particular one caught the attention of the international media. Before long I was being contacted by Radio Free Asia and then UPI picked it up, followed by Chosun Ilbo, UK tabloids, and even state sponsored sites like Sputnik News. Some contacted me directly while others brought in their own experts to do the analysis. Almost all of these additional experts agreed that pollution of any kind from the plant would be cause for concern.

However, all of this attention also meant that people started asking other questions and needing clarification. Some, it seems, have even tried to deliberately distort what it is I actually said to fit their own narrative. I want to take this time to clear a few things up and to offer additional support for what I have said. 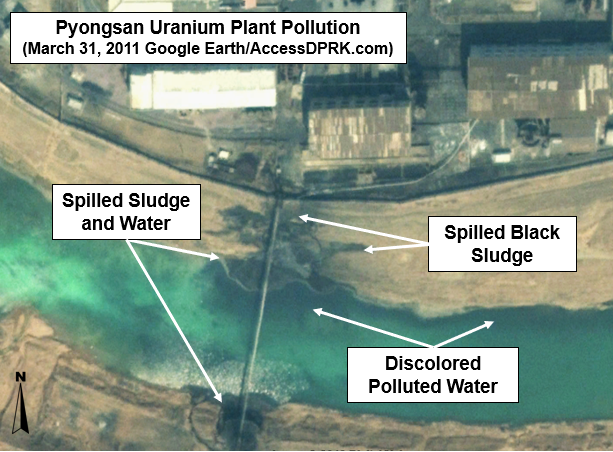 First, my original post is titled "Radioactive River" because it is about a uranium facility polluting a river. In that post I only talked about pollution in general terms saying, "the pipe taking waste materials to the open reservoir has leaks and has been spilling toxic water into the Ryesong's tributary". I said that the Ryesong is the main water source for 200,000. (However, if you widen the area to include a few extra miles on either side of the river, that figure doubles to 400,000.)

The first interview I had was with Radio Free Asia. The three minute phone call consisted of very few questions. One of the questions asked was if the waste material could be radioactive. I said yes, that some of the material could be. That one answer seems to be what most people are concerned about and confused over.

North Korea uses low-grade coal as the uranium source. Pyongsan's coal has 0.26% uranium concentration. Apart from that, lower grade coal also contains lead, arsenic, vanadium, cobalt, and other heavy metals as well as small amounts of additional radioactive material. Processing and burning coal leaves behind radioactive waste. A 2007 Scientific American article put it succinctly, "coal ash is more radioactive than nuclear waste". This is because burning it concentrates the impurities already existing within the coal. But the coal always had those materials inside of it, regardless of burning. The coal is still not pure. Whether it is burnt, crushed, or just dumped into a river, it is not a safe material to be placing into a water supply 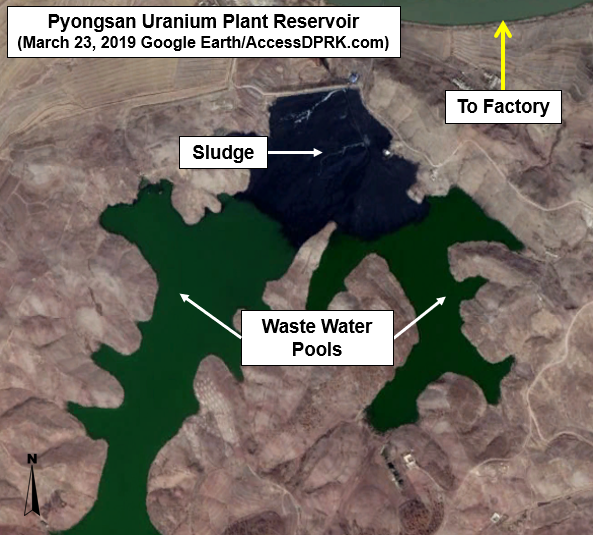 The black sludge seen at the Pyongsan reservoir is the leftover coal from the plant along with residual acids and other industrial products. It is moved from the plant in slurry form and emptied into the reservoir. During that movement, some leaks out of cracks in the pipe and ends up contaminating the Ryesong River which then eventually flows into the Han River estuary.

Regardless of the inherent dangers of leaking coal slurry, uranium mining and milling (the process of turning uranium ore into yellowcake) creates its own radioactive waste.

According to the EPA, "regardless of how uranium is extracted from rock, the processes leave behind radioactive waste....The tailings remain radioactive and contain hazardous chemicals from the recovery process."

The key to making the process safe is proper handling and storage of the waste products. North Korea is not a member of the International Labour Organization which plays a major role creating safety rules for those that work around radioactive materials. Additionally, there is no evidence that the reservoir is lined. Lining the reservoir is an extremely important part of ensuring that the toxic water doesn't leak into rivers and groundwater. The fact it is unlined was mentioned by Dr. Jeffrey Lewis, the director of the East Asia Nonproliferation Program at the Center for Nonproliferation Studies. Dr. Lewis stressed on his website the negative health concerns associated with dumping the material into an unlined pond saying, "What is definitely happening, though, is that North Korea is dumping the tailings from the plant into an unlined pond, one surrounded by farms. That’s not a hypothetical harm.  That’s actual pollution that is harming the health and well being of the local community."

The facts are beyond dispute, and regardless of the exact amount of radioactive material being spilled into the river, there are also large amounts of other dangerous chemicals that are leaking out: the aforementioned lead, arsenic, vanadium, mercury, and others. All of those things cause health problems and there is no "safe limit" to lead and arsenic ingestion.

Aside from the leaking material, even the waste within the reservoir poses a risk. During periods of dry weather, the surface of the sludge pile can dry out. Wind can pick up those small particles and carry them for miles, depositing them on land, homes, and within the lungs of anyone breathing it.

Pyongsan doesn't exist in a vacuum, either. Defector testimony from those who have worked in North Korea's nuclear program (either as miners, technicians, scientists, etc.) or simply lived in areas around nuclear sites have pointed to ongoing heath problems and birth defects. Recent defectors have even shown evidence of radiation exposure because they lived downwind of North Korea's Punggye-ri nuclear test site. The people downriver of Pyongsan aren't immune to pollution.
I am not trying to be alarmist. This is not Chernobyl or Fukushima, but all of this provides strong evidence that there is an ongoing health crisis in this part of North Korea and that some of the toxic materials being dumped into the Ryesong will inevitably reach the Han River.

I am not a nuclear weapons expert. I have never claimed to be. I am a concerned individual who has spent the last seven years of his life studying North Korea and bringing attention to important issues. I am not getting paid by any government or partisan organization. And while I don't know what constitutes being an "expert" to some, my years of work speaks for itself. I created a map with 53,000 locations, I was the first to report on a new test site at the Tonghae Satellite Launch Station, I have multiple reports on the growth of North Korea's military, I created a survey of the country's archaeological sites using open-source satellite imagery, and I was the first to report on the replica of Panmunjom. I think that qualifies me to say that black industrial waste flowing into a river is a bad thing.

Evidence of widespread contamination from various nuclear-related facilities exist around the world. And continuing fears over Fukushima and the recent accidents in Russia mean that we must all be vigilant. For my part, I will continue to observe every square mile of North Korea and to report on the things I find.