North Korea's asymmetric and urban warfare training capabilities have been the center of intense focus by Kim Jong Un. Nearly every MOUT (military on urban terrain) facility in the country has been enlarged or upgraded and multiple new sites have been constructed since his rule began. 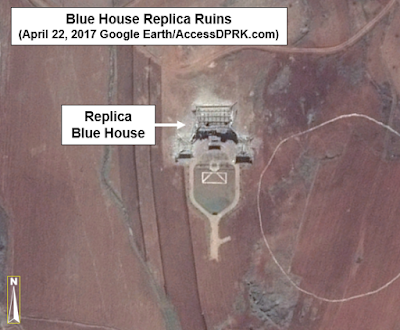 The post-training ruins of the replica Blue House, constructed near Pyongyang in 2016.

The country already has a history of constructing mock ups of important buildings like, South Korea's Blue House and defense headquarters. North Korean special forces blew up the mock Blue House during a training exercise in 2016, and in 2017 a replica of South Korea's Gyeryong military services headquarters was spotted at another MOUT facility near the Yongbyon nuclear facility. Now, a third famous site can be added to the list: Panmunjom. 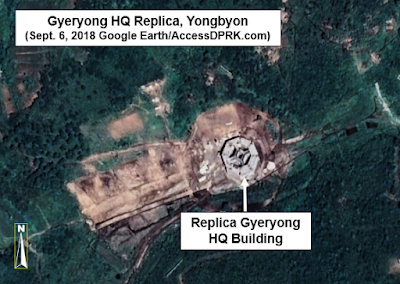 Panmunjom (aka Truce Village, aka Joint Security Area) is a small collection of buildings that straddle the demilitarized zone (DMZ) and is the only place where soldiers from both sides stand face-to-face. If you've ever visited the DMZ, you were undoubtedly taken here. The site was the location of the 1953 Armistice signing and has hosted many diplomatic and military negotiations over the years. While Panmunjom was the site of the 2018 Inter-Korean Summit, which marked the first time a North Korean leader stepped foot into South Korea since the Korea War.

The real Panmunjom is located less than 11 km from the North Korean city of Kaesong. The copy is also near Kaesong, a mere 7 km to the northwest, close to the village of Haeson. The copy is built at a small military training base that was constructed around 2006 and has had incremental changes over the years. 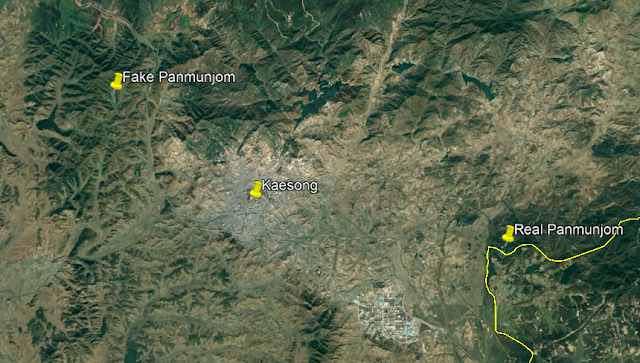 Locations of the two Panmunjom's in relation to Kaesong. 2019 Google Earth image, annotated by Jacob Bogle.

The first satellite evidence of the site is dated Nov. 29, 2017. Well before the Inter-Korean Summit which happened in April 2018. Curiously, on Nov. 13, 2017, a North Korean soldier defected the country and fled to South Korea via Panmunjom. The layout of the site doesn't perfectly match the real place, but there are plenty of similarities - most notably the design of Freedom House and the facade of the Phanmun Pavilion. 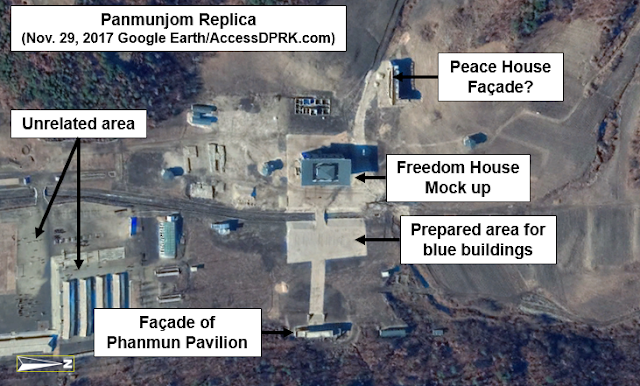 The purpose of this mock facility can only be guessed at, but it's possible it was a rushed construction to give border guards more accurate training to deal with any possible future defections. It could also serve diplomatic causes by giving dignitaries a place to do trial runs and walk through's prior to visiting the real place. However, the fact remains that it was constructed at a military base and during a time when the Kim regime was enjoying blowing up other important locations. This leads me to believe that there is likely a military purpose for it as well as any theoretical peaceful mission. 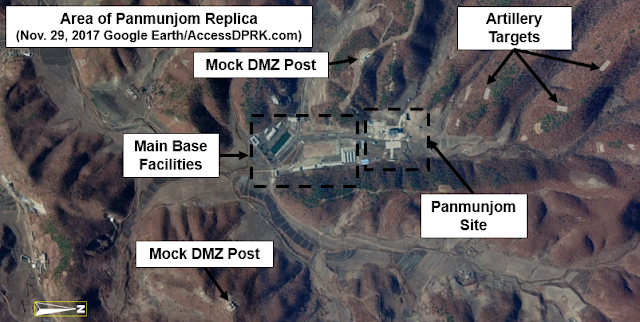