Slowdown at the Pakchon Uranium Plant?

In the course of researching my article on the toxic leaks at the Pyongsan uranium mine and milling plant, I started observing North Korea's second such facility at Pakchon, North Pyongyan.

Reviewing historical satellite imagery for Pyongsan shows an ever-growing pile of tailings (waste material) and sludge from the mine and factory at its waste reservoir, indicating continual operations. The same cannot be said upon review of the reservoir at Pakchon. A lack of obvious changes to the reservoir recently could mean a few things, which I'll discuss later.

Like Pyongsan, Pakchon was constructed in the 1980s under the leadership of Kim Il Sung (with various degrees of Soviet assistance), and is the second of North Korea's two declared uranium milling plants (where uranium ore is processed into yellowcake). The other plant being Pyongsan, as mentioned earlier. A review of satellite imagery shows the evolution of the Pakchon facility's operations. 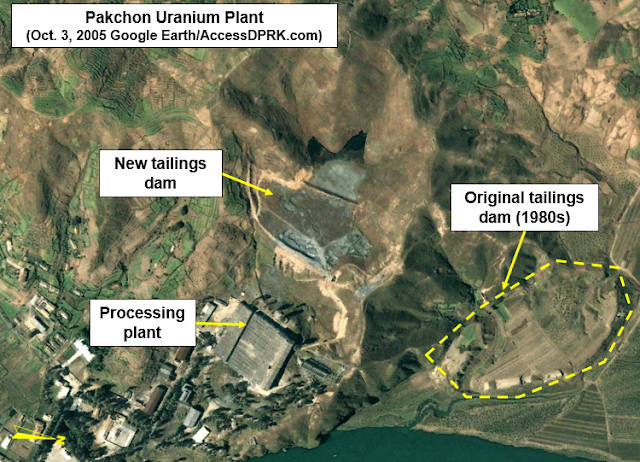 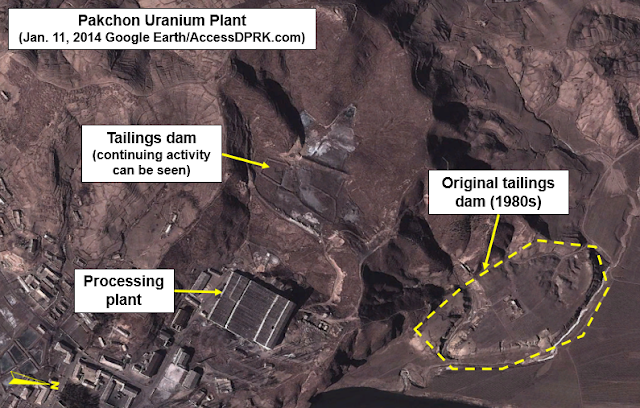 By 2014, activity at the dam can still be seen, as new materials are dumped into it via truck (unlike the reservoir at Pyongsan, which has waste material moved via pipe).

The addition of new waste to the dam appears to have slowed down by 2016. 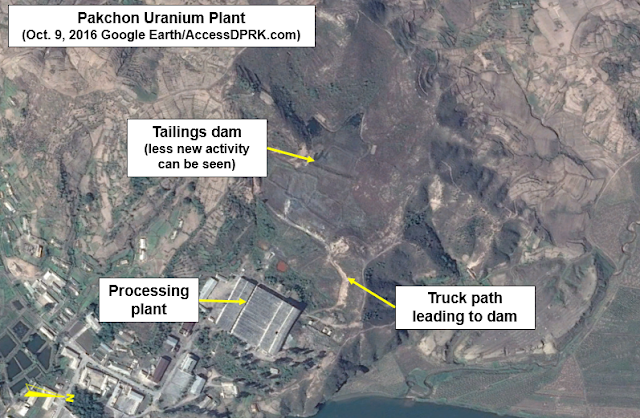 The small sections of the reservoir that were active in 2014 no longer seem to be undergoing change, and there isn't much (if any) additional activity as evidenced by the lack of surface disturbances. 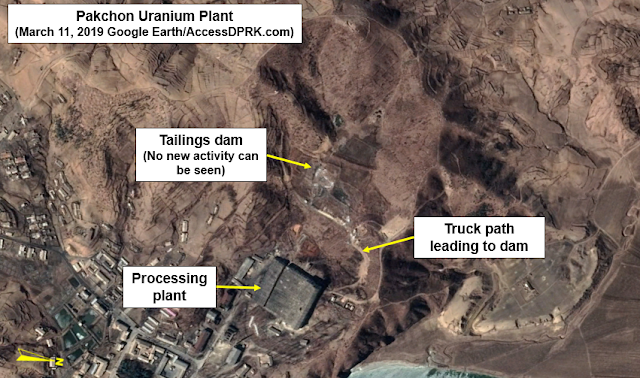 The general lack of new waste deposits has continued into 2019. Any changes to the reservoir from 2016 and 2019 are very minimal, indicating a lack of production. By comparison, the growth of the "sludge pile" within the Pyongsan tailings reservoir grew substantially.

The Pyongsan plant is much larger than Pakchon and processes coal with a uranium concentration of 0.26%, compared to Pakchon's 0.086%. Both are considerably low-quality concentrations by most definitions but seem to be among the best ore the country has domestic access to. 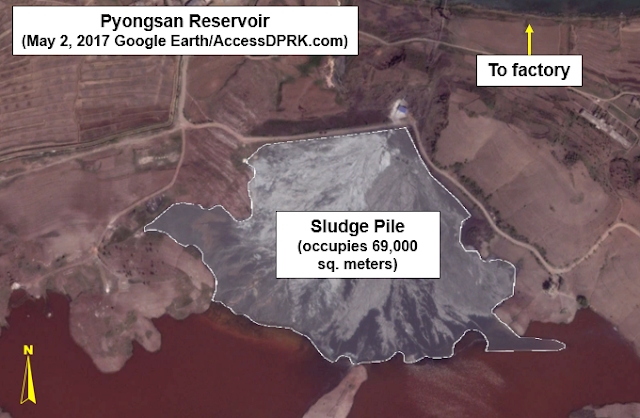 The sludge pile within the Pyongsan reservoir occupied some 69,000 square meters of space by May 2017.

The pile had grown to approximately 87,000 square meters by March 2019, an apparent increase of 26%. An exact figure can be difficult to ascertain because water levels may have changed slightly over time. 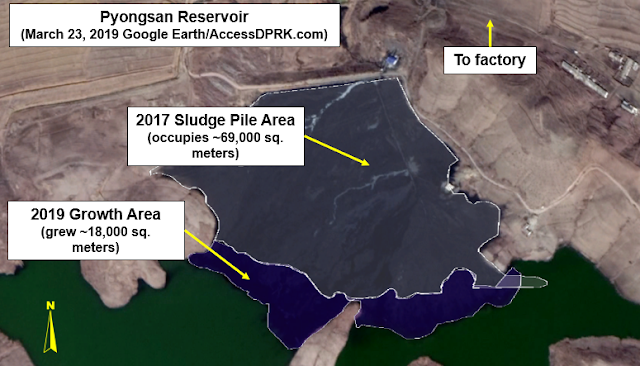 The only area of Pakchon that seems to have maintained activity is the associated mine, 1.3 km south of the main factory building.

Aside from monitoring tailings, the physical state of the factory complex gives us more information.

The main building is roughly 120x100 meters, but there are several other buildings involved in the process of concentrating and milling the uranium. The administration section of the complex seems perfectly fine, but two industrial buildings are falling apart, and one of those is in the process of being demolished. 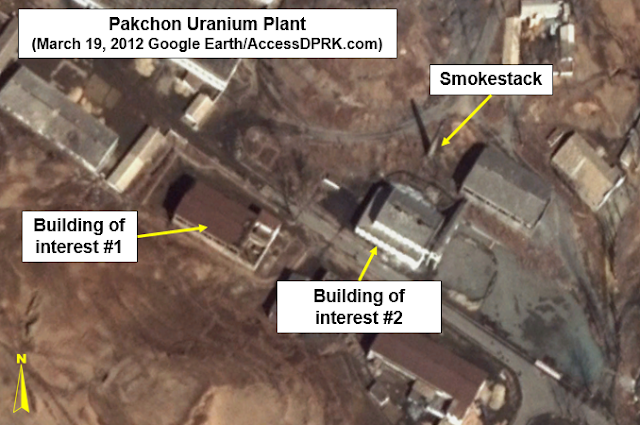 Google Earth imagery from March 19, 2012 gives a clear view of the two buildings of interest. They are in good order and appear functional. 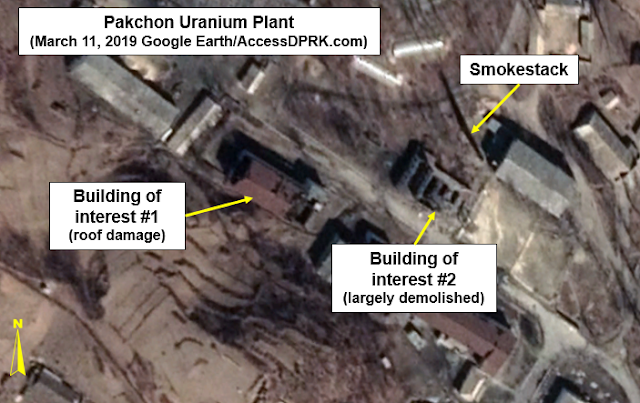 By March 2019, the roof of building #1 has several holes in it and building #2 has been torn down.

What does all of this mean?

It would make sense that Pyongsan would be the country's primary facility, as the ore used is of much greater quality than the ore at Pakchon. Indeed, Pyongsan underwent a refurbishment in 2014-2015, with additional improvements being seen even more recently. But is Pakchon slowing down?

A lack of obvious waste deposits and the fact that some of the buildings have been neglected or demolished points to problems. Mining operations have continued, but there doesn't seem to be a new tailings dam that would explain the lack of activity at the current one. The mine has settling/separation ponds but doesn't appear to have a dedicated spot to hold waste from the processed material. This could indicate that the country is stockpiling material for processing but has cut back on the overall amount of milled uranium it can produce at Pakchon. This may be backed up by the fact that, at least for 2019, even work conducted at Yongbyon has been scaled back.

Another possibility is that there are problems with the factory itself. North Korea's industrial sector has long been crippled for its lack of spare parts and its general inability to repair and replace complex equipment in a timely fashion. Additionally, uranium processing is expensive and energy intensive. During the early days of North Korea's nuclear program, the Soviet Union told them that it wasn't economically feasible to extract the low-quality uranium sources within the country. Nonetheless, Kim Il Sung persisted. The energy intensive and expensive nature of the process may have finally caught up with them, leading to scaling back Pakchon.

Pakchon has never operated every single day, but this prolonged period with little to no activity is a change from the time under Kim Jong Il. It will take more observations to know exactly what is happening, but for now, Pakchon certainly doesn't seem to be operating at its full capacity.