In 2005 Mike Ane started a file containing several hundred locations of interest and then in 2007 Curtis Melvin and his associates at www.NKeconWatch.com greatly expanded the file by mapping the economic, cultural and military sites of North Korea using Google Earth. Their work brought to light thousands of locations and their KMZ file has been downloaded well over 151,000 times. However, as I would look over the country, I would spot something they had missed, and then it dawned on me that no private citizen (to my knowledge) has ever gone through the whole of North Korea, literally square mile by square mile, and marked every single item of interest.

So, a few months ago, I decided to take on that challenge. The work of Curtis and another avid GE user ( "Planeman_") laid the foundation and their descriptions taught me a lot about what places look like. For example, what an anti-aircraft artillery site looks like from aerial imagery, what an electric sub-station looks like, monuments, train stations and so forth. Building on that knowledge and what I have learned through hundreds of hours of research, I have been able to mark thousands of new places without duplicating the findings of others.

This has been and continues to be a tremendous undertaking, but I think it is very important to shed light on a country so few know anything about. Even since Google Maps began, there was always a black hole in their data - North Korea - and it wasn't until a few weeks ago that Google began filling in the blanks, largely thanks to the work of individuals submitting information. It is my hope that in time North Korea opens up as a country, but until that time comes, I consider it worthwhile to use technology to reach out from my computer to data gathered from space and pull North Korea (or at least what I find) out of the void and bring it to the world.

North Korea is divided into 9 provinces, 2 special cities, and the capital district. There is also the DMZ (Demilitarized Zone) which I count as its own geographic division. Each area has its own file which is then subdivided in categories: Military, Monuments and Domestic. Each category may have further sub-categories such as: Sub-stations, Irrigation control and Dams, AAA sites, Road & Rail Tunnels etc. I have been making use of the placemark icons and try to make them self-explanatory and use one icon for each different type of location to avoid confusion.

The image below is a screenshot of all the places I've marked (excluding completed areas). Obviously, it looks like a mess and you're only seeing a handful of individual sites since they're all piled on top of each other, but I think it gives you some idea of what I've been doing and talking about for so long. 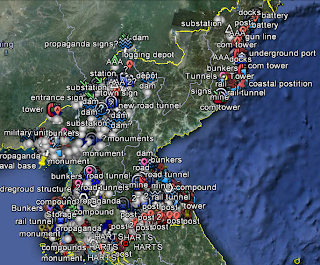 I have started files on almost every area and completed the DMZ, the Rason Special City and Ryanggang Province. It is my intention to publish the files once I am closer to completing the project, although I may publish what areas I've finished sooner.

With completed divisions and the portions of partially completed divisions combined, I estimate that I am 25% finished and have marked roughly 2,200 items. The completed areas cover nearly 6,000 sq miles of territory out of NK's total land area of 46,541 sq miles. Due to the lower quality of some of the data there will be portions that have very few placemarks simply because the resolution is so low that specific individual items can't always be identified.

You can use the hashtag #AccessDPRK when discussing on social media.
Posted by Jacob Bogle at 7:09 PM