If North Korea had a state religion the "Art of Propaganda" would be its bible.

Propaganda in North Korea is everything. It is spewed from the mouths of teachers from your first year in school all the way to college professors. It comes from every TV and radio station (all state owned), every newspaper and magazine (likewise state owned) and is plastered across the landscape. There are an estimated 50,000 statues and murals dedicated to Kim Il-sung, and Kim Jong-il and they are placed in even the most remote locations. There are also countless signs that are splashed along the sides of hills and mountains, on the sides of roads and peppered throughout city streets. A large number of these are so large they can be seen from space.

The signs often promote the "strength and prosperity" of the nation or extol the virtues of the country's leadership. From time to time they call on the people to work harder, exceed quotas, raise better crops and obey without question the orders of the Worker's Party of Korea.

Here are a few examples: "Let us march forward with the tactics of the three generations' revolution!", "Long Live the Juche Ideology!", "What the Party decides, we shall do!", "Unite as with one mind", "Let's make our own rebirth!" and "Let us plant more trees!" among many, many others. 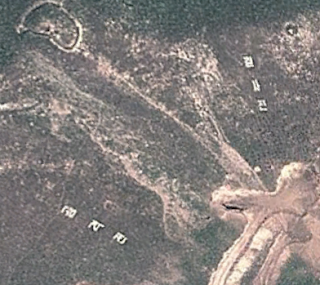 This one was located at a mine. Each slogan is around 100 feet long and are carved (and painted) into the hillside. I haven't been able to find a translation for this.

This is an example of the type that can be seen along the hillsides of nearly every town and village. Due to its angle it's impossible to know for sure what it says. The slogan is 400 feet long.

Military bases are not immune. This sign is 700 feet long.

And finally, we have a sign 1,800 feet long with each letter being 200 feet tall. This one was built within the last year along a hillside next to a brand new, massive, hydroelectric plant. It says, "Long live Songun Korea's General Kim Jong Un!". Kim Jong-un is the current leader of the country and the grandson of its founder.

Here is a site with many more similar signs as well as translations for several of them: http://freekorea.us/north-korea-faq/signs