UPDATE (8/19/15): Reporting from DailyNK says that North Korea's new border fence with China has been completed in Ryanggang Province. I finished mapping the border fences and I can attest that in the past the fence was indeed incomplete. There were a lot of gaps and areas where it had been cut or otherwise destroyed. Based on available imagery, there are still a lot of areas in the north that lack fencing.

As I said in my previous post, movement in and around North Korea is heavily controlled. Not only are there road blocks, check points, travel document requirements and so forth, there is also a network of fences which ring the whole nation.

These fences were built in earnest during the period of the 1990s famine and range from a simple fence to complex mixes of wire fences, electric fences, sand berms and concrete walls, especially along the Chinese-Korean Border and DMZ. However, much of the northern border fences construction was done on the Chinese side over fears of instability within the DPRK. Portions of the fence are constantly being maintained and upgraded while others are in fairly bad shape.

The North Korean government claims the fences have been built for national defense purposes and to protect ocean wildlife from poaching. Many outside observers say that the real motivation was to keep people from fleeing and to control the fish supply so that the elites and military received food resources first.

This large-scale image shows a green band along the beach. The fences (like the DMZ) have acted like unintentional wildlife preserves since new construction and even wandering around most beaches has been prevented. The first non-border fences were constructed around coastal cities to keep people from sailing off. I will focus this post on the coastal fences since they help highlight the human-rights abuses within the country. 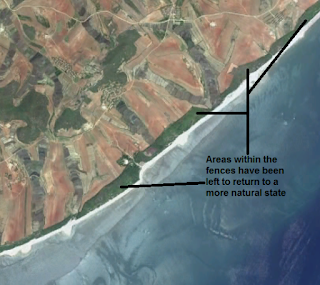 This next image is a close-up of a fence.

Here we can see a fence at a better angle to give you a sense of its height as well as the guardhouse, most of which are located in cities and villages.

This image is of a small village located on a tiny peninsula on North Korea's northeastern coast. You can see the village is almost completely surrounded. 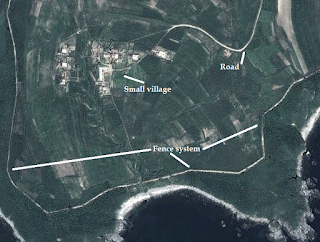 Finally, we have a fence with a small guard-post. Guard-posts are located at varying intervals depending on terrain and the regional population. The fence cuts across a river bed and it appears that section is either not finished or perhaps has been washed away from flooding. 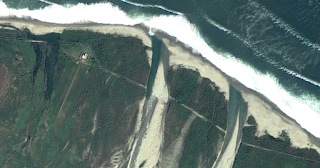