Sajido is a small village near a point called "Kwakkot-ch'wi" on North Korea's western coast in North Pyongan Province.

On Kwakkot point lies a harbor - Sajido Naval Base. The base wasn't marked by any other GE users and since public data on North Korea still lacks much in the way of place names I have simply named it after the nearest town of Sajido.

The base is located near a publicized land reclamation project dubbed the "Taegye-do Island Land Reclamation Project."[1][2] 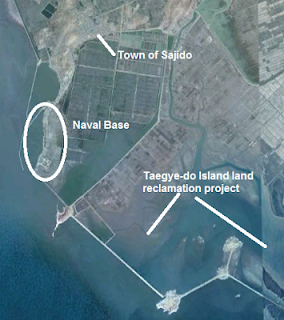 Now we'll zoom in to the actual base.

You can see the seawall that has been built to act as a man-made harbor. The base extends for nearly the full width of this image which is 1.1 miles long and 1/2 miles wide.

This close-up shows two rows of hovercraft (20 in total) on land and a single ship. The four buildings are presumably storage/maintenance bays for the vessels. The hovercrafts are about 65 feet long. 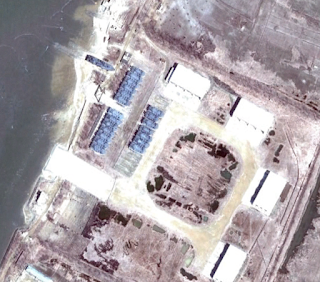 Moving north there is a "battleship row" with 7 military vessels moored and what looks like a dredge (very bottom). The green area near the center of the image is a monument.

The two larger ships are about 126 feet long, the 3 smaller ones are 80' long (most likely patrol boats) and the 2 smallest ones are between 45-50 feet long. The dredge is around 128 feet long.

Finally, we have the main base facility. 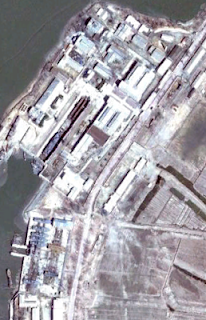 You can see a number of ships on land, one in dry dock, and the bulk of the support buildings. Farther north is a number of additional buildings but they are hard to identify and separate from the civilian buildings in town so I haven't included them in any of the images.