This is the second of the supplemental articles for the Kim Jong-un's First Decade in Power series. It details the hundreds of monuments built under his rule. 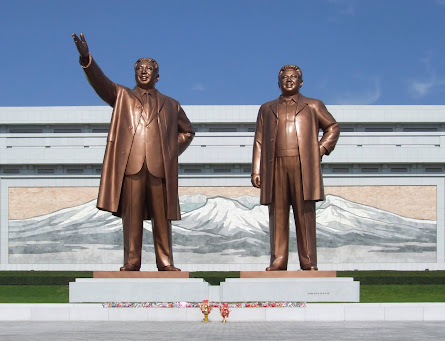 The 20-meter-tall bronze statues of Kim Il-sung and Kim Jong-il standing in front of the mural wall of the Korean Revolution Museum. The statues were unveiled in 2012. Image source: Commons/by Nicor/CC 3.0

Every country has monuments and what they decide to build monuments to can tell you a lot about the place and time in which they were erected, along with, of course, what the country finds important.

North Korea is no different. There are monuments to great battles, the founding of the country, and to important figures in national history. But what makes North Korea different than any other country is both the number and variety of monuments and the government-enforced ideology that goes along with them.

No one is forced to travel to see the Washington Monument, there is no requirement to take full photographs of the Victoria Memorial in London, and even in China people can give voice to a certain level of ideological debate in front of the giant portrait of Mao hanging above the Forbidden City.

While the Juche Tower, Workers’ Party of Korea monument, the giant bronze statues of Kim Il-sung and Kim Jong-il, and the Kumsusan Memorial Palace mausoleum may receive the most photographs and the most mention in the press (whenever the topic arises), those grand edifices only make up part of the crown of North Korean monuments, while there are literally thousands of others that dot the landscape and provide an inescapable reminder that this is solely the nation of Kim Il-sung, his descendants and their ideas.

North Korea’s cult of personality surrounding the Kim family had its roots prior to the official formation of the Democratic Peoples’ Republic of Korea in 1948, with the adulation of not only Kim Il-sung but of other revolutionary leaders and anti-Japanese guerillas, but after he became the clear leader of the nation, the cult began to take on new dimensions. In the decades since, it has become tradition for each new generation of Kim to expand the cult of his father while establishing one of his own.

Kim Jong-il secured his position as heir by building up the cult surrounding Kim Il-sung to religious levels and tying the legitimacy of government to the Kim family itself. After Kim Il-sung died in 1994, thousands of tower monuments to his “eternal life” were erected in every town and village. And from there, the physical and permanent manifestations of the cult were impossible to miss no matter how rural the area.

However, Jong-il allegedly told officials that he didn’t want massive or hundreds of monuments built to him while he was alive and while the people were still struggling with food shortages. While this would give him the image of a caring leader, more concerned about the peoples’ needs, it is also just as likely that he wanted to avoid internal dissent as the masses would be required to help fund and build monuments to a living “supreme leader” all while the state routinely failed to provide adequate food, medicine, and shelter to millions.

Regardless of the real reasons, it did set a precedent. The bulk of monuments relating to Kim Jong-il during his lifetime are those erected at factories and other locations that he visited while giving “on the spot” guidance tours, they aren’t mega statues.

Kim Jong-un has maintained this tradition.

Prior to Kim Jong-il’s death in December 2011, there were at least 10,000 stone and bronze monuments in North Korea. The vast majority were dedicated to Kim Il-sung while a small but important minority had been erected to Kim Jong-il and to his activities, as well as few in honor of other members of the family.

After his death, particularly between 2012 and 2016, Kim Jong-un embarked on a major construction program to enlarge Jong-il’s cult and to help establish his own. In keeping with tradition, permanent monuments to the living leader are less numerous than the ones built in honor of the previous one.

As such, Kim Jong-un replaced every mural of Kim Il-sung in the center of each county seat with a set of joint mosaic murals, each now featuring Kim Il-sung and Kim Jong-il. He also ordered that the text on every Tower of Immortality be modified to include the now “eternal general” Jong-il (to go along with the “eternal president” Kim Il-sung). To understand the scope of that change, it required alterations to at least 5,260 Towers.

Smaller monuments dedicated to locations where Kim Jong-il had visited or gave “revolutionary guidance” in the last year of his life were also erected after his death. 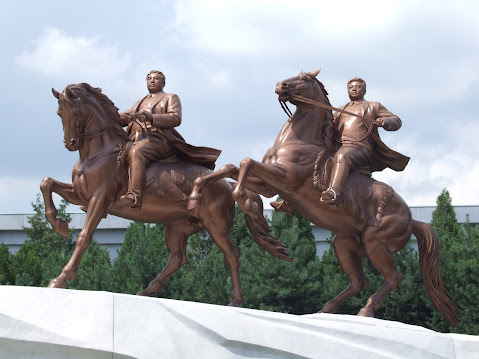 Bronze statues of Kim Il-sung and Kim Jong-in on horseback on the grounds of the Mansudae Art Studio. Image source: Commons/by Nicor/CC 3.0

One of the grand monuments constructed under Kim Jong-un in honor of his ancestors is the bronze statues of Kim Il-sung and Kim Jong-un riding horses on the grounds of the Mansudae Art Studio. The studio is the only organization with permission to depict the Kim family and they are responsible for every important statue and mosaic mural of the Kims in the country.

The monument depicts Kim Il-sung on horseback, both the man and the horse exuding confidence and stability. Next to him is Kim Jong-il, his horse almost bursting with energy as the Dear General led the country “forward” and “applying his unique 'military first' policy to turn our country into an invincible one that can never be defeated and has a nuclear deterrent in the face of the deadly pressing offensive of imperialists,” in the words of Kim Yong Nam who served as President of the Presidium from 1998 to 2019.

Unveiled in 2012, the monument was cast and finished in just two months according to North Korean sources and was one of the very first major works to show Kim Jong-il.

With Kim Jong-un having solidified his link to past leaders and sufficiently glorified them, he also began work on his own cult. As statues of himself are taboo, the first glimpse of his megalomania was seen in the 560-meter-long slogan sign on the hill overlooking the Samsu Hydroelectric Dam. Declaring, “Long live Songun Korea's General Kim Jong Un!” the sign was actually built before his official transition was over. A decade later it still stands, the only change being to reflect his own changes in policy; the word “Songun” has been replaced with “Juche”. 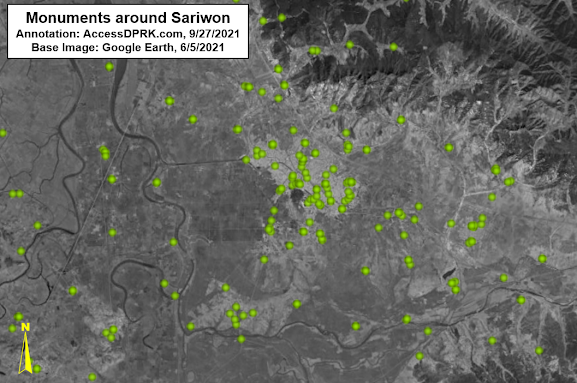 The locations of monuments in and around the city of Sariwon. Based on research done for the AccessDPRK project.

In all, under the rule of Kim Jong-un, the AccessDPRK project has located 867 monuments that were built from 2012 onwards. This represents 7.3% of all monuments in the country and new ones are erected every year.

Of that number, 31 are joint statues and 281 are joint murals. There are also at least 5,260 Towers of Immortality in the country. And aside from the alterations to the thousands of existing Towers, Kim has had a further 103 erected around the country.

All of this new construction means that there are at least 11,755 monuments in North Korea. And between building new ones and renovating existing monuments, I estimate that at least $1 million a year on average is spent on this aspect of the personality cult. There have been tremendously greater expenses in the past (such as the Kumsusan Memorial Palace), but those are relatively few and far between.

Another way to quantify the scope of monuments in North Korea is to look at how much land they occupy. After doing a representative survey of the different types of monuments, totaling 10% of all monuments in the country, I estimate that the paved (e.g. non-landscaped) area of all of the monuments in the country occupies approximately 350 combined acres of land. Another way to look put it, is that they take up the same amount of land as 198 standard UK football pitches. However, if you were to add in the landscaping and wider public parks dedicated to key members of the family, the total area of the country involved in commemorating the Kim’s grows considerably. The land area of the Kumsusan Memorial Palace alone is nearly 90 acres and there’s over 80 acres dedicated to the Kims in the city of Hoeryong.

While knowing that acres and acres of land are being used to glorify such a family instead of being used for better purposes helps us conceptualize the scope of monumental construction, knowing the types, numbers, and dates of construction does offer additional benefits for those interested in the topic.

The vast majority of guidance visits are publicized in DPRK media, but they are vague on the exact locations of the places visited. So, we can correlate the construction dates of monuments and their types to then help identify the locations of formerly unknown places, as these smaller commemorative monuments are usually built within a few months to a year of the visit. A good example of connecting monument construction with Kim visits can be seen in the elite KPA Farm No. 1116, where monuments and a museum have been built in response to multiple visits by Kim Jong-un.

The edification of the Kim family goes well beyond stone monuments in village squares. There are hundreds of museums in the country, many of which have been renovated under Kim Jong-un. From the expansion of the Korean Revolution Museum to the reconstruction of the Sinchon Museum of American War Atrocities, scores of buildings that either directly enforce the ideologies of Kim Il-sung and Kim Jong-il or that promote the regime’s narrative of history have either been remodeled or placed under construction.

With monuments in every village and scattered throughout larger towns to the Juche ideological study halls to Kimilsungism-Kimjongilism rooms inside of high schools, and to revolutionary museums being located in every county seat, no one is far removed from visible reminders that North Korea is Kim’s Korea.

Add to this that the only official sources of information come from the state and that the regime has taken great steps under Kim Jong-un to limit outside information from breaking the ideological blockade, this layered approach to propaganda bolstered by a decade of new monuments has continued to shape the world view of 25 million people and it will be a monumental task in itself to overcome three generations of indoctrination if reunification ever comes.

I have scheduled this project to run through to the end of the year, with a new article coming out roughly every 10 days or so. If you would like to support the project and help me with research costs, please consider supporting AccessDPRK on Patreon. Those supporters donating $15 or more each month will be entitled to a final PDF version of all the articles together that will also have additional information included once the series is finished. They will also receive a Google Earth map related to the events in the series, and can get access to the underlying data behind the supplemental reports.

Supporters at other levels will be sent each new article a day before it’s published and will also receive a mention as seen below.