Tunnel Construction Near Reconnaissance Base 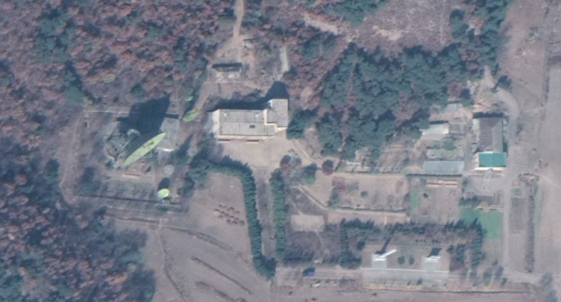 The administrative center of the base along with one of the large communication dishes (left) as seen via Google Earth on Nov. 8, 2019.

Very little is publicly known about the facility and even the James Martin Center for Nonproliferation Studies' own Nuclear Threat Initiative database gives only a vague description of its location and describes it as a missile base (admittedly, there are only a couple old sources available). However, the National Geospatial Intelligence Agency's GEOnet Server does verify that a place by Mt. Ryongak is called Oryu-ri (Oryu Village).

The NGA's name database along with the NTI's general location description both fit the area and I am confident that NTI is describing what is not a missile base as such, but some kind of reconnaissance/signal intelligence base. Oryu-ri may play a role in missile defense, but it is not where missiles are launched.

Anyway, the base covers approximately 80 hectares and has existed since at least 1985 based on Landsat imagery. The facility consists of two very large communication dishes (with a diameter of 28-29 m) as well as two smaller ones. It has a clearly identifiable entrance gate and an administrative area, but what is more interesting to me is the fact that it has two large tunnels going into the mountain. 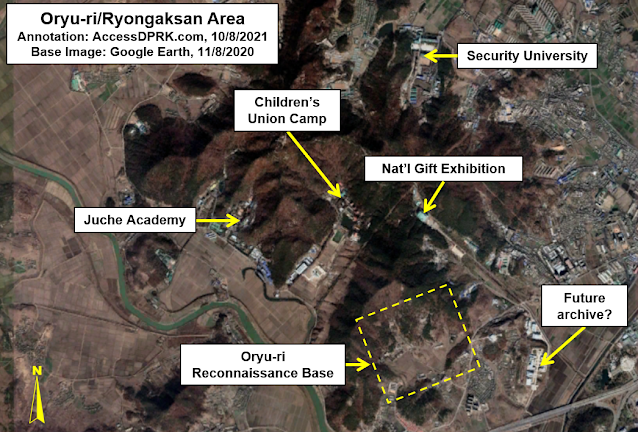 The crowded area around Mt. Ryongak

Despite its apparently clandestine activities, Oryu-ri isn't in a super remote area. The southern side of Ryongaksan, where the base lies, is also home to two camps of the Korean Children's Union, a Juche Academy, and the National Gifts Exhibition Hall (constructed in 2010-2011).

In 2019, just 350 meters from the main gate, a new set of apartments were constructed. An unidentified but suspected new national archives complex was also built nearby at the same time.

Adding to things is that on the northern side of the mountain are three military-related facilities and the Security University of North Korea. All of this means a lot of people moving around the vicinity of the base.

This brings me back to the underground sites.

Despite having external buildings, most of the real operations of the base appear to go on beneath the mountain. Outside, there's an assembly hall, some agriculture-related structures, and each of the main satellite dishes has its own control building, but I can't point to anything that might be where the signals intelligence are gathered, stored, interpreted, or anything. To me, this suggests that the main operations of the base are carried out underground. 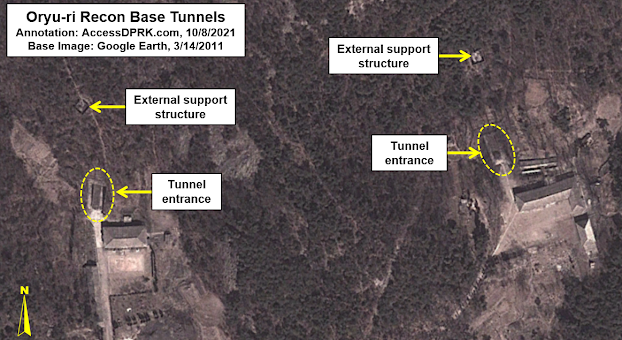 Main tunnels of the Oryu-ri Reconnaissance Base. This older image from 2011 gives some of the clearest views of these tunnels unobscured by tree cover.

Lending weight to that theory is the size of the tunnels. The two tunnels are about 12 m wide and each one has some type of support structure above the entrance, likely part of the ventilation system, meaning that the underground portion of the base is not inconsequential. In 2018, the eastern tunnel (39.021580° 125.633111°) had a structure built over the actual entry face, obscuring its view and giving added environmental protection as people go in and out.

The two tunnels are placed 275 m apart and have been placed roughly 60 meters above sea level, with the rest of the mountain looming a further 130 meters above, giving an enormous potential space inside and plenty of rock cover in the event of an attack.

Large underground facilities such as this often have smaller exit points/maintenance entrances, and Oryu-ri does indeed have at least one identifiable access tunnel on the eastern flank of the mountain at 39.024930° 125.636075°. There is a second site with an old spoils pile, indicative of previous excavation work, but the tunnel entrance may be obscured by trees or hidden with a building.

Based solely on the positions of the two main tunnels and the access tunnel, I estimate that the interior space (if it only consists of one level), is 70,000 sq. m. However, it could be as large as 80,000 or as small as 31,000, depending on the actual internal configuration. This estimate is arrived at by considering the most concise and simple geometric designs that connect the three sites, along with the topography of the mountain itself. There is no evidence that it sprawls through the whole mountain.

It is the location of the access tunnel that makes this next part all the more interesting in my mind.

Moving forward to 2020, a lot of progress had been made constructing the tunnel and a smaller construction access tunnel had also been added between the two main entry points of this new, larger tunnel, which is a common feature of long tunnels of every kind.

This new, large tunnel is approximately 10 meters wide and has two probable courses. One is simply a (mostly) direct line from Point A to Point B which would take it almost right beneath the National Gift Exhibition Hall, and the other would have the tunnel more closely follow the internal bend of the mountain, allowing for maximum overhead coverage and without risking the structural integrity of any other buildings.

The white line shows the most probable direct path of the tunnel. The blue line shows a more inward curve within the mountain and has greater overhead rock coverage.

Because the new tunnel is located so close to the Oryu-ri base, with its location next to the base's UGF access tunnel, and that it comes out at a national security university, it raises these questions:

1. Does the new tunnel directly connect to Oryu-ri's underground facility?
2. Could it be part of an expansion of the underground base?
3. Does it indicate joint activities between Oryu-ri and the Security University?
4. Or is it simply a future shortcut to the university from the new subway stations that are being built along the Hyoksin-Kwangbok subway line extension 2-3 km away from Oryu-ri?

This most recent Google Earth image shows clear tunneling work of a size capable of allowing vehicle traffic to pass through the tunnel.
Time will tell, particularly if the access road going from the Oryu-ri side of the new tunnel gets repaved and realigned to fit the other roads in the area, which would better connect it to future subway stations. Until then, we're left with yet another tunnel without an immediately clear purpose.