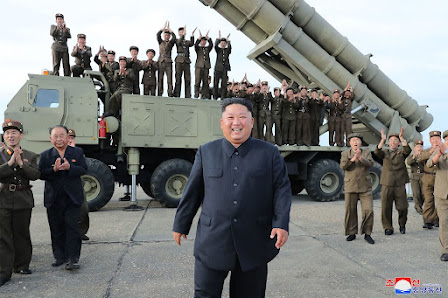 Kim Jong-un overseeing the test of a “super-large” multiple rocket launcher in August 2019. Image via KCNA.

Successful hereditary succession in communist regimes was unheard of until Kim Jong-il inherited power from his father Kim Il-sung in 1994. Kim Il Sung founded North Korea in 1948 and over the years the source and legitimacy of his power morphed away from popular power and became based on a kind of divine right, a right that separated his bloodline from any other and made his descendants the only ones with the legitimacy to rule. Fast forward to the death of Kim Jong-il on December 17, 2011, his son (Kim Il-sung’s grandson) assumed the mantel of power for the next generation.

Kim Jong-un was only 28N1 and became the youngest world leader to have nuclear weapons at his disposal. He was Kim Jong-il’s fourth child and so wasn’t the clear choice to become Supreme Leader until relatively soon before Jong-il’s death. In fact, he was such an unknown that prior to his ascent, even the U.S. Central Intelligence Agency only had a single picture of him as an eleven-year-old.

In the decade since Kim Jong-un became the Supreme Leader and Marshall of the Republic, North Korea has become a fully-fledged nuclear weapons state, he held the first-ever meeting between a North Korean leader and a sitting U.S. president, he has placed the Worker’s Party of Korea back into the center of governance (reversing the policy of his father), and the regime embarked on billions worth of construction and tourism programs. All the while killing relatives, enduring food shortages, maintaining a vast prison system, and is currently struggling with the greatest economic downturn since the 1994-98 famine due to COVID-19.

Kim Jong-un has a family, laying the foundations for a future fourth generation of Kim rule if he manages to maintain control for succeeding decades. But the chances of a successful future lie in his actions during this first decade.

The purpose of this multi-part series is to examine the history, challenges, successes and failures of Kim’s first decade in power and to probe whether or not a future decade is likely based on the performance of the last.

A lot has transpired these ten years and new challenges such as Kim’s health, abrupt changes in U.S. foreign policy, and other unforeseen events can have a major impact on the future of North Korea. The last decade gives us a template to consider how Pyongyang may react to such events and reminds us that they always carry the risk of swamping the man and the apparatus of state.

This series will be broken down into these primary themes:

Additionally, occasional supplemental articles may be added to help expand certain topics that are relevant to Kim’s first decade and will be based on the findings of the AccessDPRK 2021 Pro Map.

It is important to avoid caricatures and popular biases when investigating a county and a man already viewed in the popular imagination as unstable and irrational; a view often prompted by reports in mass media. While occasional literary flourishes may be used throughout this series, I have endeavored to present a fair and accurate accounting of the facts of this last decade and will not shy away from objective successes or indulge in a tragedy of horrors to fit certain political narratives.

Kim Jong-un is a complex individual and North Korea is a nation of 25 million other individuals all with their own hopes and dreams, who share 75 years of history. Attempting to minimize their experiences or warp them through overt political lenses does not serve the wider debate and dishonors the realities of life in North Korea as best as we can understand it from an outside perspective.

I have scheduled this project to run through to the end of the year, with a new article coming out roughly every 10 days or so. If you would like to support the project and help me with research costs, please consider supporting AccessDPRK on Patreon. Those supporters donating $15 or more each month will be entitled to a final PDF version of all the articles together that will also have additional information included once the series is finished. They will also receive a Google Earth map related to the events in the series.

Supporters at other levels will be sent each new article a day before it’s published and will also receive a mention as seen below.