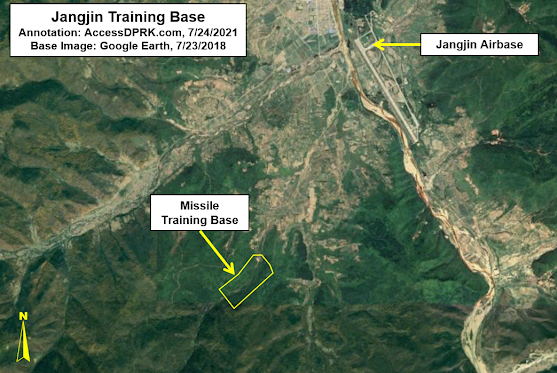 North Korea has an estimated twenty operating ballistic missile bases, and most have gone undescribed in public sources except for brief mentions of the existence of “Base A” or “Base B”. Many of these bases have their establishments in the 1980s and 1990s, coinciding with an important period of missile development in North Korea as the country moved away from simply reverse engineering Egyptian-sourced SCUDS and began to develop their own indigenous weapons.

North Korea also has a number of areas used for testing rocket engines and the missiles themselves; areas such as the Hodo Peninsula Testing Facility, the Sinpo Shipyard, and many more. Getting even less public mention are the numerous smaller parts of the country’s missile infrastructure.

There’s more to developing a credible ballistic missile force than just having the ability to launch them. Having locations to do everything from research and development to training your nascent missile force personnel in handling, moving, mating, fueling, raising, and arming the missiles is necessary.

If no one can drive the large vehicles needed to move the weapons from one place to another, you’re left with sitting targets. 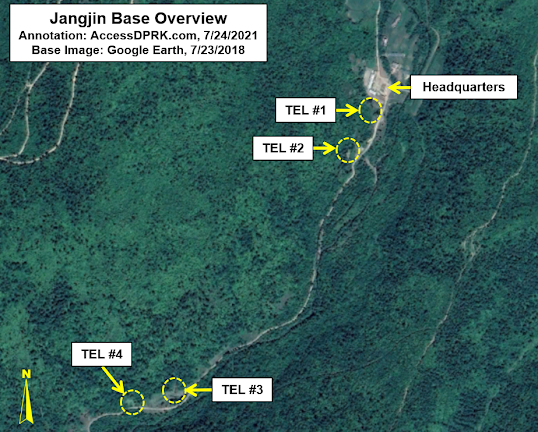 The Jangjin complex is one of the smaller ballistic missile-related facilities in the country. From its headquarters to the rear of the base is only about 1 km, while some operating missile bases cover dozens of square kilometers.

The base is situated in a forested part of Jangjin County and is arranged along a single dirt road. Moving south from the headquarters are four transporter-erector launchers (TELs), each with their own bunkers for protection.

There are also smaller objects and excavated emplacements throughout the complex, but they are too nondescript for me to identify.

The TELs are approximately 17 m long and 3 m wide, while the bunker structures are 18-19 meters long and 5 meters wide. Each one is also protected by an earthen berm positioned roughly 28 meters away from the bunker entrances. 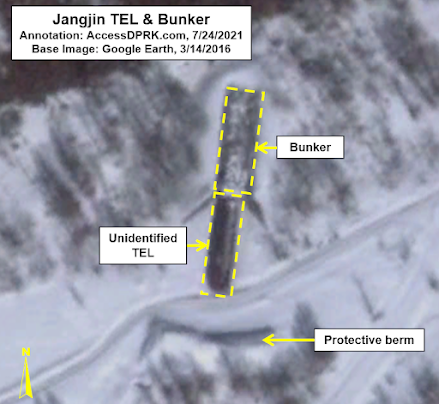 A question exists whether or not the base is currently active. A review of Google Earth imagery shows that the TELs barely move, if at all, over a sequence of seven available images from 2009 to 2018. The TELs are not seen fully housed inside the bunkers nor are they seen moving around other parts of the base.

The headquarters and road are maintained, suggesting the site hasn’t simply been abandoned, but what its current status is isn’t known, as North Korea’s modern intercontinental missiles are too large to fit the TELs at Jangjin. However, that may help give us an answer.

Jangjin may have been one of the first dedicated ballistic missile/TEL training bases constructed. At the time, the country only possessed short- and medium-range ballistic missiles (which fits the size of the visible TELs). Training for these missiles and equipment is still needed, but the country’s focus has since been on developing and deploying larger and larger missiles leading to the need for the enormous 11-axle TEL seen in 2020. Jangjin may simply no longer be a key training complex, particularly as other bases improve their own training capabilities.

The reason I don’t think this is an operating missile base is because it lacks many of the features common to known operational bases like Sakkanmol and Kal-gol. Some of the features it lacks are:

If not a training base, another possibility (though unlikely) is that Jangjin is actually a decoy site to fool foreign intelligence agencies into thinking North Korea has a larger force than they really do. Of course, after being around for so many years and with very little mock operations occurring to fool foreign observers, such a decoy site would quickly be identified as such and it would no longer serve a useful purpose.

North Korea does have up to 10 decoy surface-to-air missile batteries, but I am not aware of any fake ballistic missile sites in the country or anywhere else.

If it is indeed a training facility, the Jangjin site fits within the logical development course of a missile program and it takes its place within a large network of related infrastructure that analysts are still trying to fully uncover.

I haven’t been able to find any public information about this facility and those whom I have asked about it were either unaware of its existence or only knew that “something” was in the area. One of the purposes of AccessDPRK is to provide what information can be found and then to ask the public to do their own digging and to work collaboratively so that ever more information becomes available. If you know anything more about this facility or think I have gotten something wrong, please share.