Mystery at the National Defense University 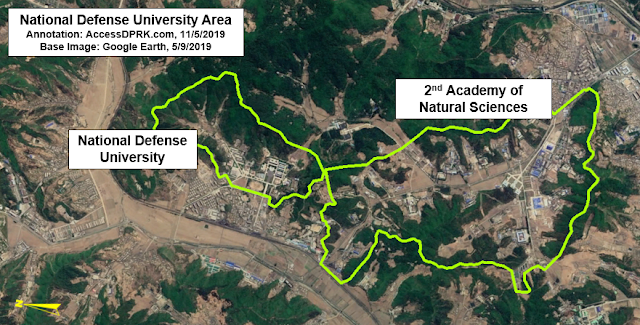 The NDU has undergone several changes since Kim Jong Un's rise to power but one that hasn't received much attention is a small addition constructed in 2014. It was noted in the AccessDPRK Phase II map release in 2017, but I didn't know much about it and it lay forgotten until now. 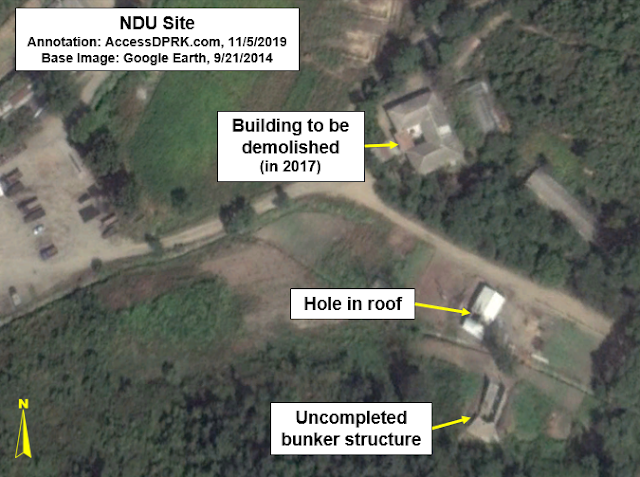 The area in question is a small, tunnel-like structure or bunker that was set into the side of a hill. It also has an opening in the roof of the structure.

Initial excavation work began in 2013 but the structure wasn't constructed until 2014. In Sept. 2014, apparent damage to the roof of the nearby white building was also observed. There has been a building on that site since at least 2000, however, it was reconstructed in late 2013.
To my eyes, the damage looks like there was a small explosion of some kind that blew through the roof. 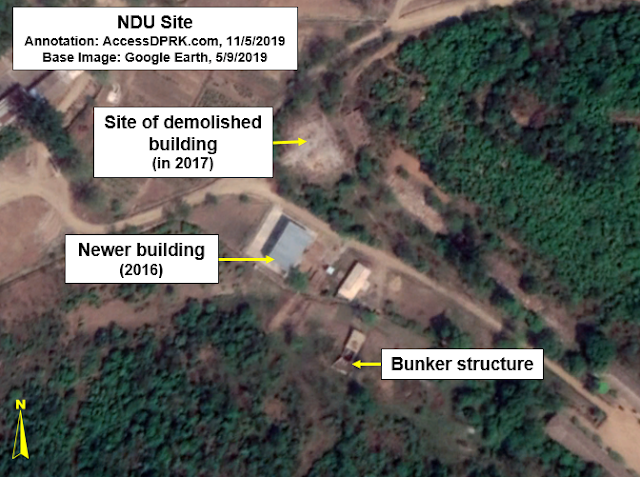 Since then, another building was constructed nearby in 2016 and an existing building was demolished in 2017. Additionally, during 2014, roughly 245 meters to the north-northeast of the bunker, a small structure was built on a hill. It resembles an observation hut, but there is some question if there is a clear line of sight from the hut to the bunker. It may just be an observation hut for activities happening in another part of the university compound that was simply constructed at the same time.

In Sept. 2019 I decided to try and solve this little mystery. I reached out to Joseph Bermudez, senior image analyst at the Center for Strategic and International Studies, and to Joshua Pollack and David Schmerler, both senior research associates at the James Martin Center for Nonproliferation Studies, to see if they could lend any insight.

Not being a missile expert, my initial thought was that the site may have been a horizontal test structure for testing either small scale-models of rocket engines or to test certain pieces of technology. I came to this conclusion because A) the NDU has been involved with the development of North Korea's missile technology, B) I thought that the opening would allow engine exhaust to flow out without damaging the rest of the concrete structure, and C) because learning about complex systems require learning about the fundamentals first. As with rocket hobby groups elsewhere, the bunker could be used to familiarize students with simple examples of solid fuel rocket engines.

Unfortunately, none of the three experts seemed to think my idea was right, and all gave their own various reasons for that. So, still left with a mystery, I asked them what their impressions were.

Joseph Bermudez said that his initial thoughts were that it's either a small firing range for handguns or a small explosive ordinance disposal (EOD) site for "training/familiarization". He also said that the damage to the roof of the other building couldn't be positively identified without doing more in-depth image analysis, but that it didn't necessarily have to have been caused by an explosion.

I doubt that it is a firing range because many examples of those exist, both large and small, and none take on this form, but some kind of EOD site does makes sense.

Joshua Pollack also raised the possibility of the bunker structure having to do with explosives, either training or testing. David Schmerler called its utility for substantial testing/training into question because of a general lack of infrastructure to move vehicles and equipment around (access to the site is through dirt paths). However, small vehicles can make it to the site and small-scale experiments/training could be carried out.

In conclusion, there is no conclusion. While the general consensus is that it may have something to do with explosives, there still exists the questions of what kind of explosives (weapons, demolition, solid rocket fuel, etc.) and for what purpose (testing, disposal, training). As it stands, the site doesn't currently seem to be easily identifiable, it appears to be the only structure of its kind in the country, and generally remains a mystery. Perhaps as time goes on and newer images of the site become available its function will become clear. Until then, I have another North Korea Mystery to add to the list.

If you have a credible explanation (or better yet, proof) of what the site is or additional information that may be useful, please feel free to comment or otherwise get in touch.