Located in Pyongyang, the Ryongsong Residence (also called Residence No. 55) is the primary family compound for Kim Jong Un and family. 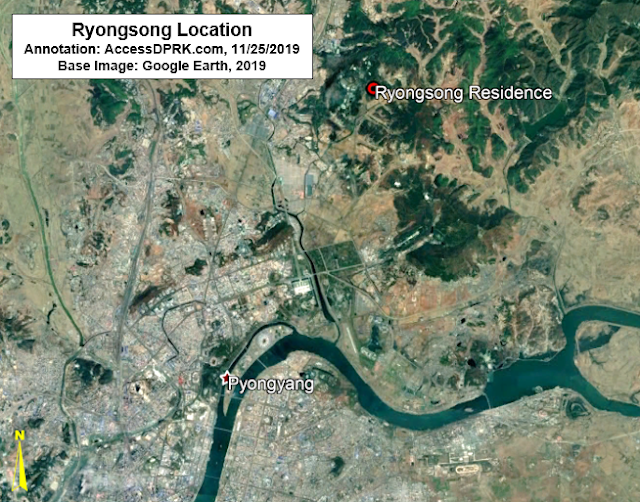 Security is always tight at the various palaces and villas across the country that the Kim family uses, however, Ryongsong takes security to an entirely different level. More than just some pleasure palace with horses, ponds, and massive dining halls, Ryongsong is a keystone in protecting the heirs of Kim Il Sung. Not only is it surrounded by densely wooded hills, fences, walls, and comes with an enormous security detachment, it actually sits at the very heart of the capital's air defenses. It may be the most well-guarded residential compound in the world.

Initially constructed by Kim Il Sung in 1983, the compound has undergone many changes over the years and has helped keep the Kim family protected and in power despite rumored assassination attempts and amidst millions of starving people during the famine.

The primary compound is approximately 11.3 sq. km. (4.37 sq. mi. or 2,800 acres) There are other smaller annexes that directly abut the main facility, but they are for security, maintenance, staff housing, buffer zones, etc. The addition of these annexes brings the total area of the compound to 12.9 sq. km (5 sq. mi. or 3,200 acres). 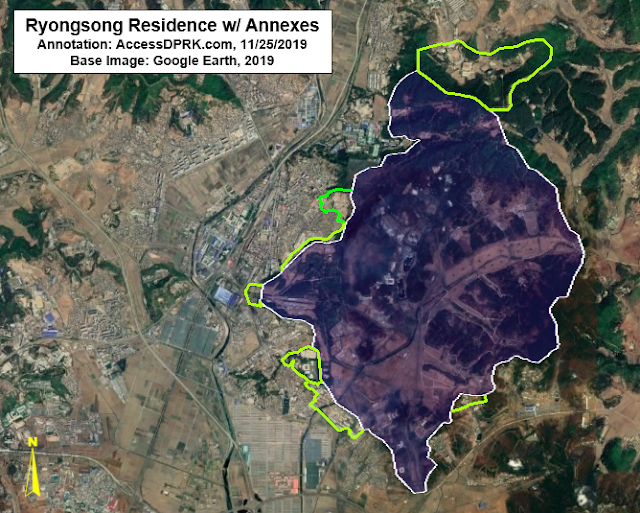 Getting inside the compound can only be done through two direct routes, a special train station and a single access point from a highway. All other entrances into the primary compound must go through one of the annexes or other circuitous routes which prevents random wanderers from finding their way to a check point and prevents anyone from using a vehicle to try and bash their way in directly. It's simply not possible.

The main entrance is located 680 meters away from the highway, allowing security to observe oncoming vehicles. The entrance itself is consists of two thin roads parallel to each other that make their way through layers of electrified fencing and a series of walls and ditches so steep and wide that they could stop tanks. The entrance site is flanked on both sides by wooded hills providing further protection.

Further inside (about 740 meters), another ditch and fence system surround large parts of the compound. Traffic on the roads may move freely over it, but any large-scale intrusion would be forced to use those roads which would serve as a choke point and allow security to destroy whatever was coming. This internal set of fencing serves as the main encircling layer of protection. Every so often are observation posts and even machine gun emplacements.

From there, roughly 1.6 km along the road, is the primary residential compound. It has its own set of fencing, entrance gates, and other security features. 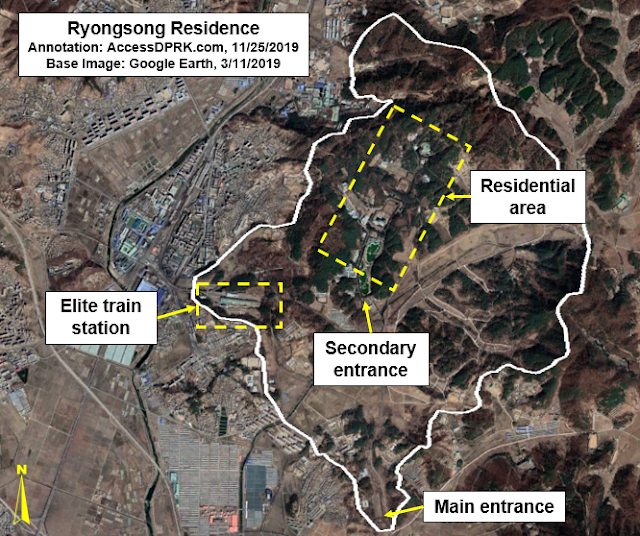 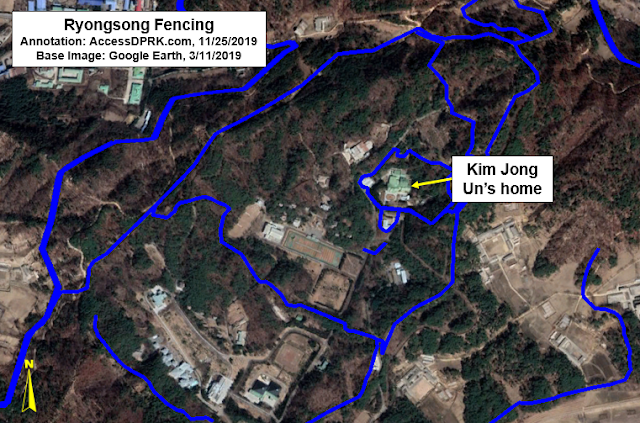 The various fences within the main residential area. 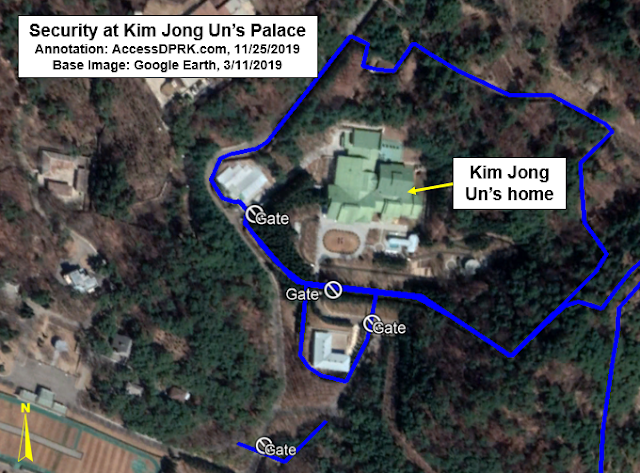 Beyond the physical barriers that wrap the family in a cocoon of safety, are the guards themselves. The Supreme Guard Command (also known as the Escort Bureau) is an elite security unit of upwards of 120,000 soldiers that are tasked with protecting Kim Jong Un, his family, and any other elites he would designate. Kim Jong Un has his own personal security detail of unknown size, however Kim Jong Il's numbered some 200 personnel. Outside of that immediate pocket of protection, the Guard mans the numerous security posts and machine gun nests of Ryongsong. They are also responsible for security at all of the other palaces and assist in keeping the leadership train and elite aircraft secured, in conjunction with other special units.

By comparison, the US Secret Service has around 7,000 employees, but they're split between their duel objectives of presidential protection and fighting counterfeiting. That isn't to say anything of their amazing capabilities, but the Secret Service is greatly dwarfed in numbers.

The geography of the Ryongsong area helps protect the palace from ground attacks and the multiple, nested check points make storming Kim's personal villa practically impossible. That leaves the open skies...which aren't really all that open.

In terms of air defense, Pyongyang's airspace is probably the most well defended in history. Their weaponry may be aging but the city is still surrounded by ring after ring of air defense sites. The capital region has 19 surface-to-air missile (SAM) sites and around 400-500 anti-aircraft artillery (AAA) batteries that are arrayed into three main rings. 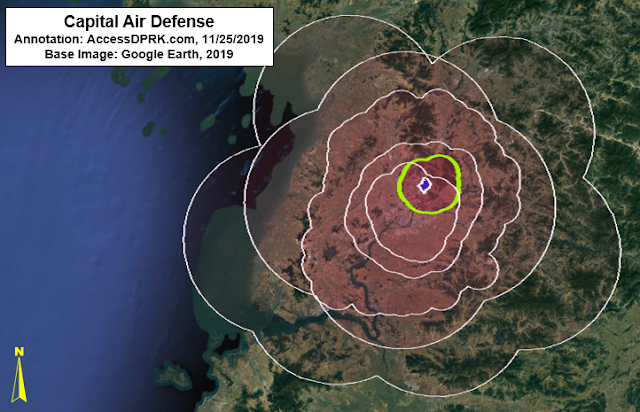 SAM coverage area (outermost two rings) is approximate and based on the S-125 (SA-3) system. The other four rings are based on a range of 4 miles for the AAAs (this is for simplicity as North Korea employs a mix of systems). The fourth AAA ring (yellow) is the dedicated palace air defense ring, with Ryongsong (in blue) in the middle. This simplified view was created based off of key "anchor points" and is for illustrative purposes only.

While these sites are supposed to be about protecting the capital and its 2.5 million residents, when you observe the air defense system in its entirety, you find that there is a fourth ring of AAA batteries aligned specifically for the palace, and that Ryongsong is actually within the coverage area of the entire system. Between SAMs and AAAs, Ryongsong sits at the heart of a total of six defensive rings. The complex is, indeed, the most well defended residence on the planet.

Kim's security and the reach of Ryongsong extend beyond its fences. The leadership train station at the palace connects to 20 others across the country, providing Kim with a secure and rapid way to escape to other palaces or even to an underground rail complex in N. Pyongan Province. Several other palaces are rumored to be connected to each other via tunnel as well. Ryongsong is also within six miles of an airfield and a dedicated, hardened heliport that could spirit Kim to other areas or even out of the country if needed.

North Korean ideology and law place Kim Jong Un at the head of the Korean Workers' Party, the state, and military. Underscoring that point, state media released a statement regarding the execution of Kim's uncle, Jang Sung-taek, that said, "No matter how much water flows under the bridge and no matter how frequently a generation is replaced by new one, the lineage of Paektu [Kim Il Sung] will remain unchanged and irreplaceable.
Our party, state, army and people do not know anyone except Kim Il Sung, Kim Jong Il and Kim Jong Un."

The efforts put into Ryongsong and the protection of the Kim family embodies that reality.