North Korea has been touting itself as a strong, powerful, socialist nation for generations. That propaganda, however, has largely been devoid of reality. That is, until the newest incarnation of the divine Paektu Bloodline arrived to save the people of North Korea. Whatever caricatures may exist of Kim Jong Un being a squat, little "rocket man" with funny hair and whatever very real criticisms exist of the terrible human rights situation in the country, the fact is undeniable: Kim Jong Un has fulfilled the nation's long promoted promise of turning North Korea into a nuclear-armed state with a credible missile deterrent.

While the country has had a missile program for decades, the main propaganda surrounding those developments were limited to posters, songs, and "documentaries", even when progress was made under Kim Il Sung and Kim Jong Il. However, satellite imagery shows that Kim Jong Un feels he deserves something more long lasting, something written in....stone.

Kim Jong Un has tested more ballistic missiles than both of his predecessors combined, and key milestone launches have now been commemorated with monuments of stone. These monuments center on launches carried out in 2017, North Korea's "miracle year" in which they tested missiles capable of hitting all parts of the United States and tested their largest nuclear bomb to-date.

There are five of these launch commemorations known, with the latest one being under construction as of May 2019. The fact the regime is still building these monuments may contradict their claims to have accomplished a nuclear deterrent (at least to their satisfaction) and contradict occasional claims that the government will begin to move away from the "two track" system (developing the economy and nuclear weapons in tandem) to focus on the economy, as it shows Pyongyang is still placing a new level of emphasis on these weapons. (Not to mention all of the other worrying signs that North Korea has no intention to denuclearize.)

I want to give a quick shout out to Joseph Bermudez and Victor Cha, Jeffery Lewis, and Dave Schmerler for their respective work on individual monuments. 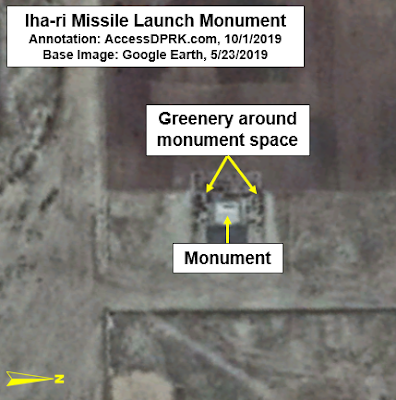 The dimensions of the monument space is roughly 24 m x 19 meter, while the monument itself is a small stone about 2.5-3 meters.

The location of the monument is actually ~320 meters away from the launch site. The test stand that was used was one of the sites demolished in hopes of helping relations between North Korea and the United States. 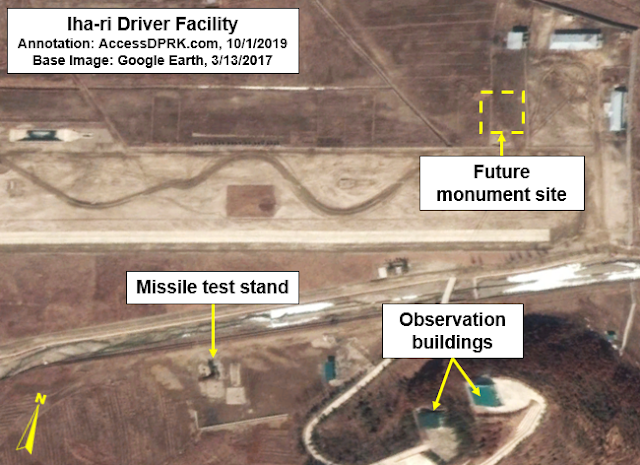 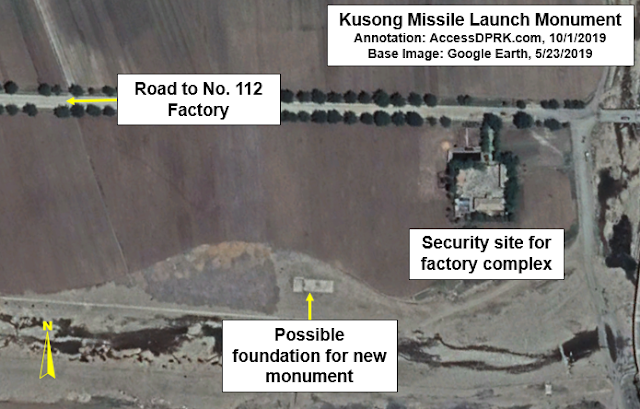 The monument foundation first appeared in October 2018. The fact it hasn't been completed by now suggests the work has been suspended for some reason. The concrete pad is approximately 27 meters long. The wider section (left-side) is 10.5 meters wide and the thinner, longer section is about 8 meters wide. Some of the commemorative monuments incorporate the launching pad itself into the overall monument site, so the thinner, longer section could be it. 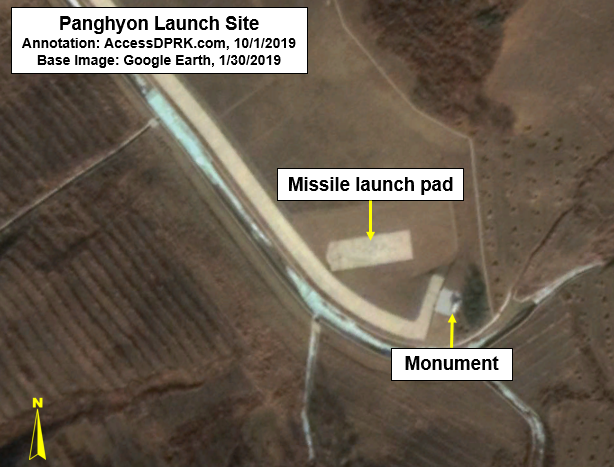 A second monument was constructed at the observation post located a kilometer away, but it was later demolished. Currently, this is the only stone monument at the site. Across from the monument, up the hillside, is a slogan sign that was also erected after the test. Unfortunately, the image isn't of sufficient quality to know what the sign says. 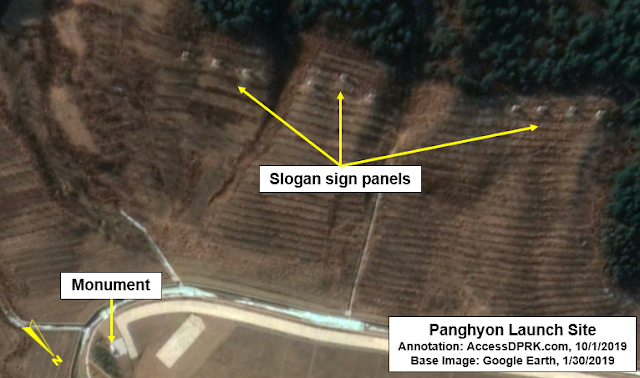 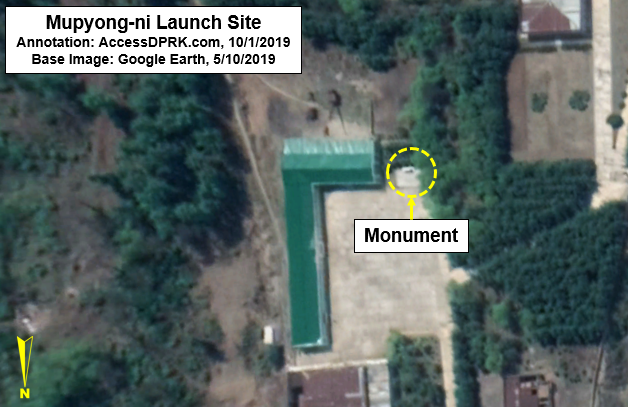 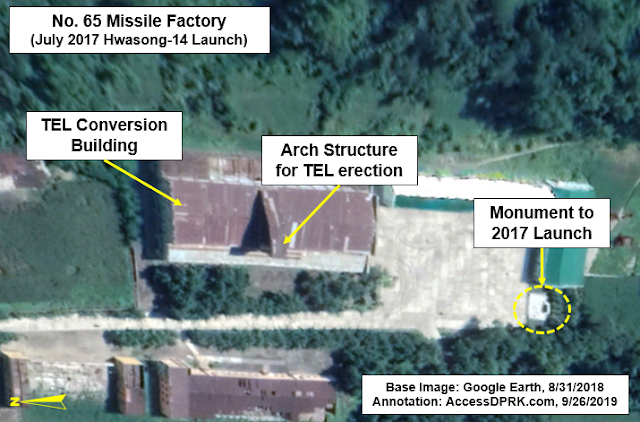 The Hwasong-15 missile is North Korea's longest-range missile that has been tested. It is theoretically capable of hitting nearly all of the US mainland. Not surprisingly, the monument to the launch is the largest of the five. 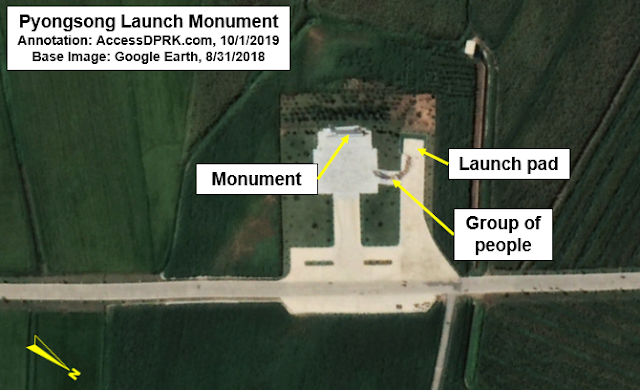 Including green space, the monument's area is 75 x 61 meters. The launch site occurred 4 km north of the March 16 Factory in Pyongsong. The factory produces a wide array of military vehicles and supports the missile program by either manufacturing or modifying launch vehicles. According to 38 North, "it was revealed that the building and temporary shelter were used to modify the Hwasong-15 TEL and test the operation of its elevation cradle and detachable launch table for the November 28, 2017 test launch."


One thing that I have found interesting is the variety of locations where North Korea has tested missiles. Factories, fields, vehicle test ranges, beaches, air ports, and even places that are actually dedicated to missile launches like at Hodo. These tests are not only to show that the country has the needed capabilities to successfully launch them, but the range of testing locations is a none-to-subtle message to the world that they are able to do so from any part of the country, not just from military bases or sites with purpose-built infrastructure.