I have a page of "mysteries" for the #AccessDPRK Mapping Project. They're sites that I either don't know what they are, can't firmly identify, or would like more specific information on (like different palaces). One of those sites is in North Pyongan Province and it has a tunnel, water running out of it, and an electrical substation. Obviously it's a hydroelectric plant, right?

The problem is that there isn't a dam or reservoir nearby, neither is there a gravity-pump setup. So where's the water coming from? 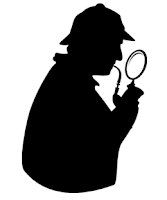 I sat with this little mystery for a few years because there was no obvious source of water. Could it be some secret underground facility and the "stream" coming out of it is just drainage? North Korea does have plenty of those, but then other aspects of the site didn't really make sense for it to be an underground military base or factory. So, as I said, I sat with the mystery. 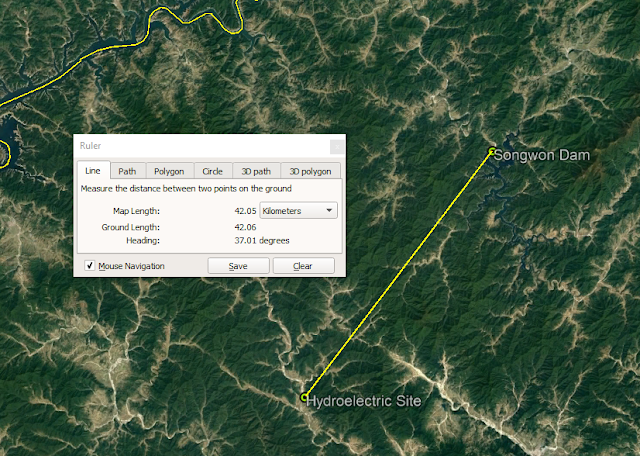 I was recently researching some of the country's large dams and came to Songwon Dam in Chagang Province, about 42 km away from the first site. Every source that mentioned Songwon said that it was a hydroelectric dam. There's one problem with that. Songwon doesn't have a hydroelectric generator, not even one downriver like many other hydroelectric sites do. Now I'm sitting here with a hydroelectric dam with no generator in one province and an apparent generating site with no dam in another province. 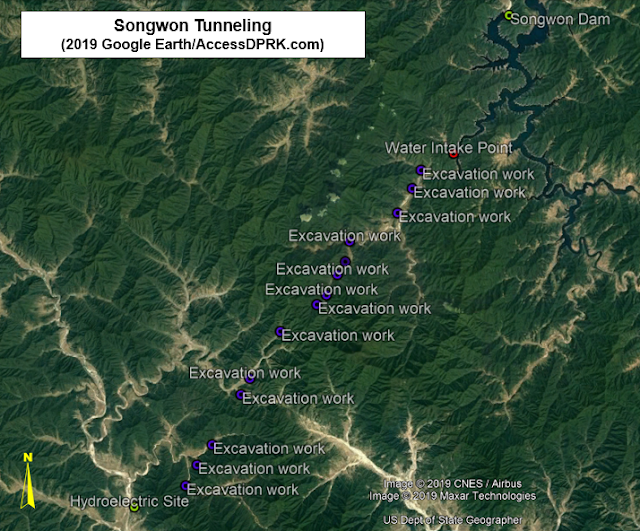 The next step was finding out that the apparent mines in the area form a lovely 42km-long straight line from Songwon directly to the mystery site. In fact, they're not mines at all, but the excavated debris from one heck of a tunneling project - a tunnel that takes water from the Songwon reservoir and to the hydroelectric generating site. Thus, Songwon is a hydroelectric dam. It just makes its electricity in the neighboring province. Songwon was completed in 1987 and Landsat/Copernicus satellite imagery also shows construction work happening at the "mystery site" in 1987, too, further verifying their connection. A happy little mystery is now solved. 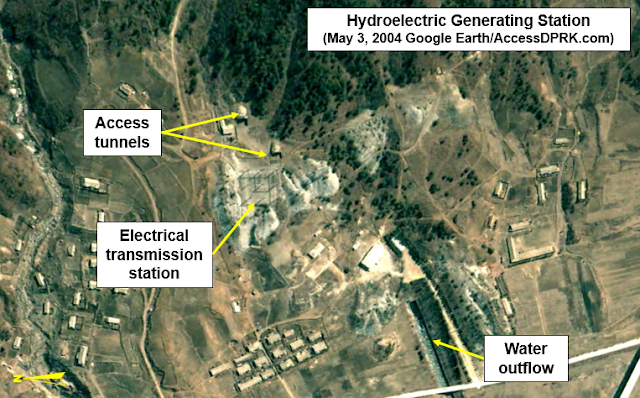 It seems like North Korea isn't done creating these huge tunnel systems. There's the newly finished Wonsan People's-Army Power Station in Kangwon Province. It, too, has a tunnel taking water from the reservoir to a generating station that, in this case, is 28 km away.

Having the generating site farther away from the dam means that you can get a greater change in elevation which will increase the water's speed as it moves downhill. The faster water moves the more momentum it has, and that means it can turn turbines faster, generating more electricity. If a dam is 200 feet above sea level, you'll get a lot more electricity generated if you have the generating station at 30 feet above sea level vs. at 150 feet by making that water drop 170 feet instead of just 50.

The Wonsan dam is at 1,800 feet and the first generating station (there's two) is at about 680 feet, a massive drop. However, they could have achieved the same amount of elevation drop using a tunnel 10 km shorter if they went toward a different direction. The same is true of Songwon. From the intake site to the generating station there's a ~560 foot drop...spread out over 42 km! In the case of Songwon, that elevation drop could have been accomplished by placing the generating station 25 km downriver.
However, the tunnel would not have been able to be in a straight line, making construction more difficult. It appears that the Wonsan tunnel could have been in a straight line to reach the shorter distance, so I don't know why they opted for the longer journey instead. 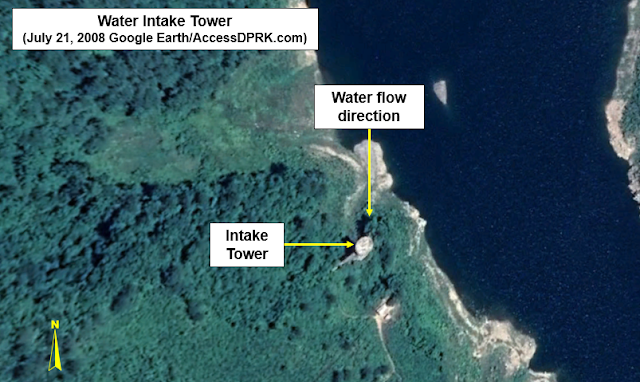 The next image is a picture of an intake tower with a similar layout as the one at Songwon. The "window" on the tower is to let air in to prevent a vacuum from forming and damaging the system. 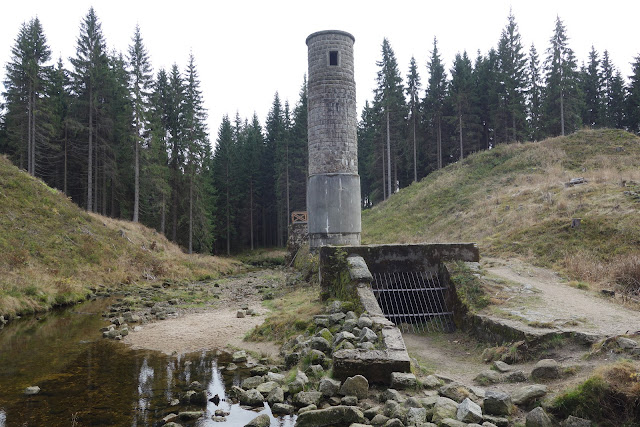 The last thing I'll say about Songwon is that even though the reservoir is massive (it covers 18.3 square km and has a capacity of 3.2 billion cubic feet of water according to the FAO), the amount of water coming out of the generating station is very small. The size of the electrical substation is also rather tiny compared to the ones at other large dams. This is because the water intake point is actually at the surface level of the reservoir. If the reservoir is even slightly low, water wont flow into the tunnel to turn the generator. This means that despite the enormous effort North Korea put into constructing everything, it doesn't seem to be generating much electricity in return. Of course, North Korea isn't exactly known for their efficiencies - be it efficiencies in design, labor, or cost, the regime really seems to like expending huge effort for little gain.

I want to give a quick shout out to my Patreon supporters: Kbechs87, GreatPoppo, and Planefag.