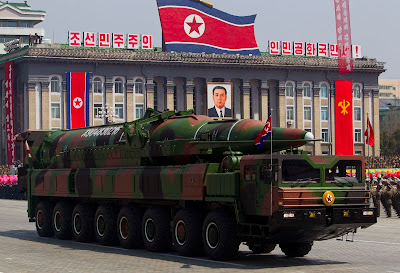 North Korea tested their most powerful nuclear device on Sept. 3, 2017. The bomb was estimated to have had a yield of between 100 kt and 250 kt, which is the upper reach of the test mountain's ability to contain the explosion. In other words, a larger bomb could have destroyed the mountain (Mt. Mantap).

After the test, the world seemed to be bracing for a war between the United States and North Korea. What happened next made history. In November North Korea stopped every kind of test related to their WMD programs: ballistic missiles, nuclear, everything. The North also took the unprecedented step of blowing up the tunnels (also called portals) used to test their nuclear devices at Punggye-ri in May 2018.

While many hailed this decision, others pointed out that the much promoted "destruction" only destroyed the portal entrances. There's no evidence the vast tunnel system beneath Mt. Mantap was destroyed. This left open the opportunity for the site to be reclaimed once the small amount of debris was cleared out. According to a statement from the Institute for Science and International Security by David Albright:


"North Korea’s action is better than a freeze and represents a disabling of the test site. However, like many disabling steps, North Korea could likely resume testing at the site after some weeks or months of work. Although the main mountain is unlikely to be usable, other nearby mountains could be used. And two of the portals (numbers 3 and 4, using North Korean nomenclature) were apparently intact and usable for further nuclear explosions prior to the dismantling steps conducted."

Despite that warning, relations continued to thaw. And then on June 12, 2018, a sitting American president and a leader of North Korea met in person for the very first time. The Singapore Summit was short on details and formal disarmament agreements, but North Korea maintained its own nuclear and missile testing moratorium for a year. However, since Nov. 2018 (a year after tests stopped in 2017), the country has tested over a dozen short-range missiles during seven different launching events.
Additionally, after dismantling a test stand at the Sohae Satellite Launching Station in June 2018, the test stand was reconstructed in 2019. Oh, and let's not forget the continued production of uranium at the Pyongsan uranium milling plant.

So what do the resumption of missile testing and the reconstruction of weapon sites have to do with Punggye-ri? 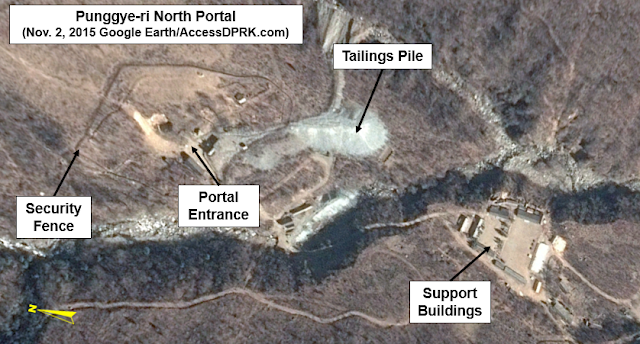 This image shows the north portal as it was in 2015. All of the various buildings are standing and the site is operational.

The below image is after the May 2018 demolition. You can see that the portal area has been disturbed by the explosions and the support buildings are gone. 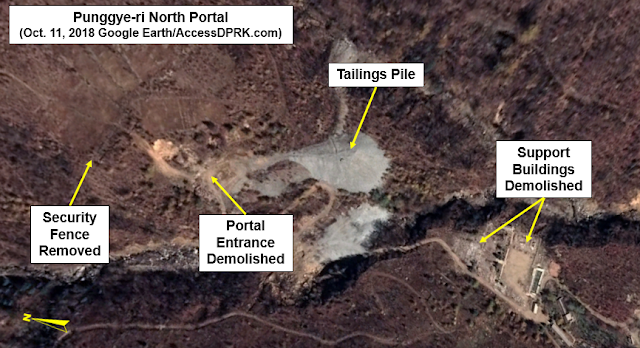 Free open-source satellite imagery from Google Earth shows that while some of the tunnel entrances were indeed destroyed, the entire rest of the nuclear complex is still standing. This strongly suggests that North Korea was never serious about engaging in any activities that would substantially or permanently disable their ability to develop and test nuclear weapons or long-range missiles. It also backs up what David Albright (and others) have said, North Korea could rather easily resume testing if they desired.

Punggye-ri is located in North Hamgyong Province and lies adjacent to the Hwasong concentration camp. (I raised concerns about prisoners being used for slave labor at the site back in 2017.)
Starting at the small village of Punggye-ri, the testing complex runs over 17 km north along a river valley that eventually leads to the base of Mt. Mantap, where the tunnels are and the testing occurs. 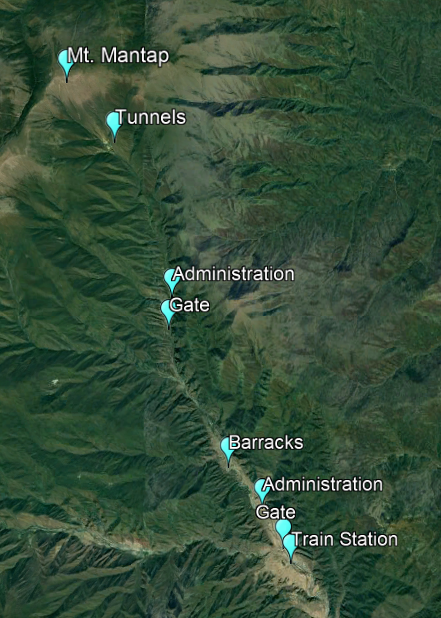 This series of images will take you from the tunnels (portals) and down along the valley until reaching the train station. They will show, without doubt, that other than the initial demolition of select facilities near the portals, the entire complex still stands. 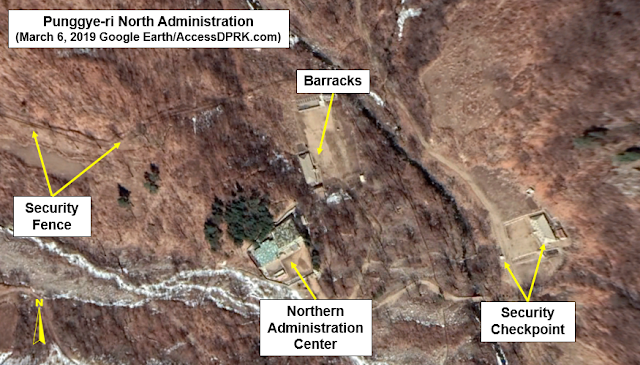 As of March 2019, all of the sites within the northern administration area are still standing, including the checkpoint. 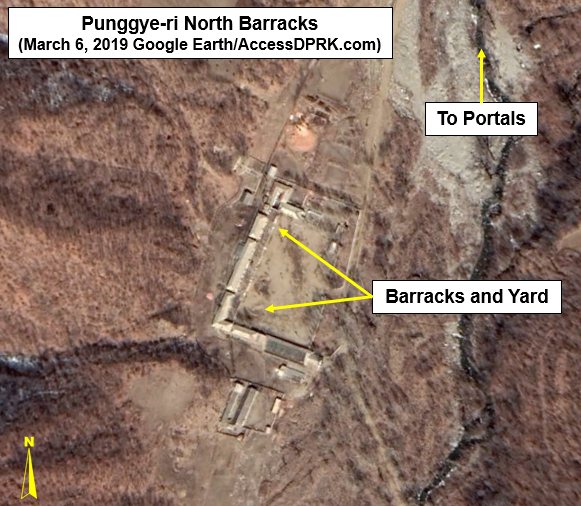 About 700 meters to the south of the northern administration area is a set of barracks. There hasn't been any change to them since the May 2018 "shutdown".

Further south is the second security gate. Maintaining these internal security points (which are north of the main entrance location) would not be necessary if the facility was permanently decommissioned. 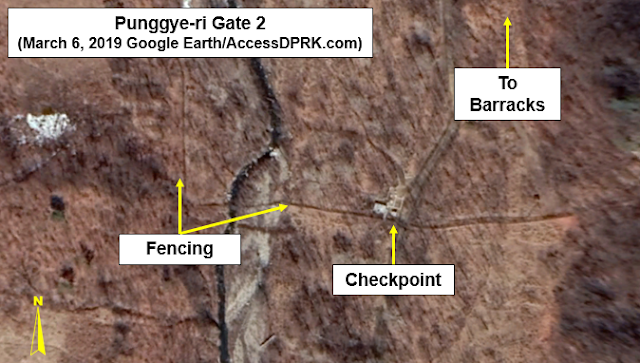 Still moving south, 5.8 km away from the second gate, is another set of barracks and support buildings. 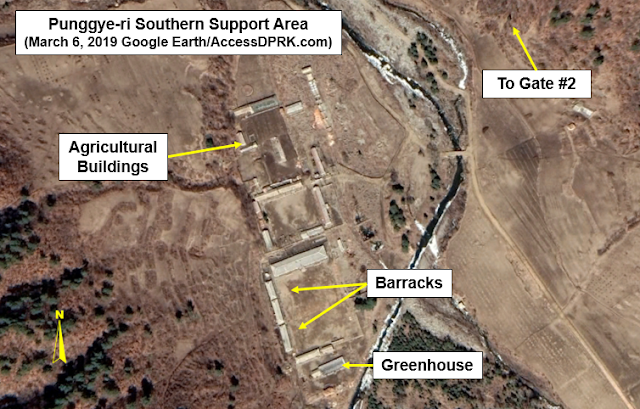 This southern area has barracks and a set of agricultural buildings. Portions of the valley are used to grow the crops eaten by the personnel stationed at Punggye-ri. Lush fields of various crops can be seen on an image dated October 11, 2018. Five months later and the fields are resting for winter and the buildings still stand as seen in the above image. 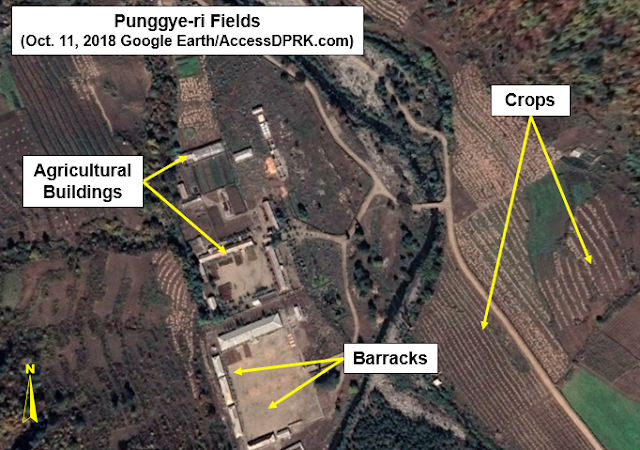 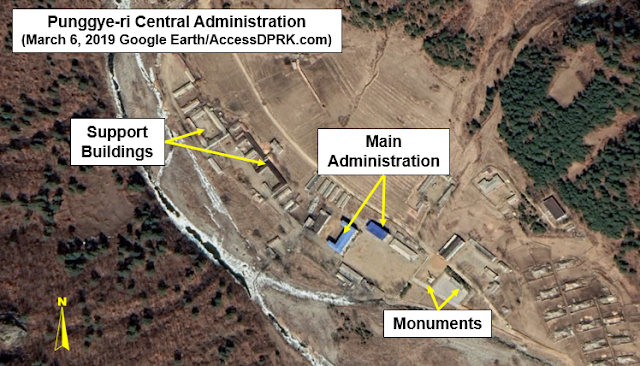 The southernmost part of the testing complex is the central administration area. It deals with logistics, supporting overall operations, and manages personnel housing. It, too, is fully intact.

If the site had been permanently closed, it makes sense that the gate would remain to prevent people from walking into a dangerous area, however, when its existence is combined with the rest of Punggye-ri, it leaves little doubt as to its continued survival as a future nuclear testing site. Additionally, the train station hasn't been altered in any way. The civilian village of Punggye-ri only has a few hundred residents, the train station would only need to keep one of its two platforms to maintain domestic rail service.


The unchanged status of Punggye-ri has been further verified with newer imagery from DigitalGlobe as recently as July 2019 by 38 North. Two years on from their last test, the site's continued existence calls into question the wisdom of increasing funding by over 10% of the Inter-Korean Cooperation Fund, to hit a total budget of $1.18 billion. The fund's purpose is to help establish peace and grow economic ties between the two countries. However, North Korea has a history going back decades of defaulting on loans, stealing equipment, demanding even greater payments, and commandeering joint projects (like the industrial site at Kaesong.) They do this while surreptitiously continuing their weapons program and engaging in countless illicit acts to bypass sanctions and earn even more foreign currency.

Punggye-ri's ability to be quickly restored, the reconstruction of the Sohae missile launch site, the repeated missile tests resuming in 2018, and Pyongyang's massive infusion of cash into their conventional forces are all none-to-subtle hints that they will not stop being a threat, no matter how earnest the Moon and Trump administrations would like to make friends.