I now have files started on all provinces, expanded my file on the DMZ and creating a new folder to deal solely with road blocks in and around the DMZ.

I've also re-organized each file to make them easier to use once they're published. Originally I simply had 3-4 categories for each area but that meant they were enormous and if someone only wanted to view train stations they would have had to un-click all the other placemarks. When I began, I had no idea just how many places would need to be marked. So now the main categories for all files are: Military, Monuments and Domestic but they each will have sub-categories, although there may be some differences dependent on the region.

Now, let's have a bit of fun and do some sightseeing. As always, simply click on an image to enlarge it.

First there's this naturally made island in the northwest which looks remarkably similar to the real Korean Peninsula. 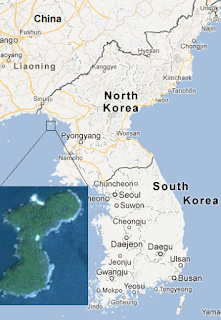 I wasn't the first person to find this island which would normally mean I wouldn't post it but I find it most intriguing and thought you would as well. Similarly, some of the other locations in this post have been known about for years but they're still interesting and we're "sightseeing" anyways.

Here's an example of the ~3,200 "Towers of Eternal Life" which were erected in every town and village after the death of Kim Il-sung.[1] 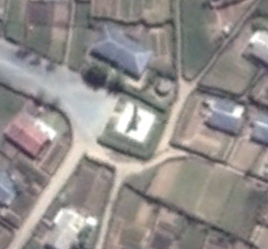 This is another monument. Well, actually there are two, the tower (right) and what is most probably a mural (center) of either Kim Il-sung or Kim Jong-il. 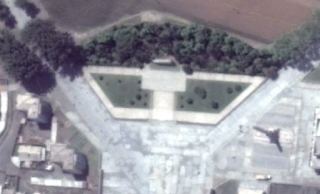 Here is one of the few working factories in the country. 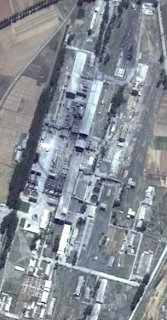 Based on close-up imagery the factory looks like it was much larger in the past and as the North Korean economy flat-lined many of the buildings were torn down or fell into disrepair. There is still evidence of some production going on given the dark smudges on the undamaged roofs caused by pollution.

This image shows a large communications tower and shadow. 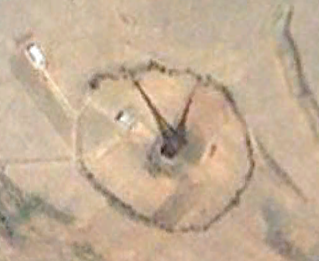 Korean's (both north and south) are traditionally a Confucian society. Part of that entails burial mounds instead of the below ground burials common to Western culture.[2] Here is an example of one such mound.

It is impossible to tell how old this mound is, but it is likely the person who died was either wealthy or an important figure in the region the mound is located in. During the famine, also known as the Arduous March, the bulk of the 1 million+ dead were buried in mass graves or in smaller, irregularly shaped burial mounds. These can be seen on almost every hill in the country. I suppose this mound could have been built for an important person who died during the famine, but again, it's impossible to tell. 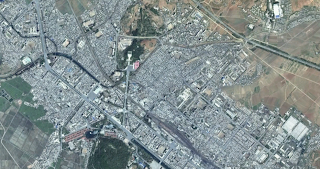 This is Sariwon, the capital of North Hwanghae Province. From space, at least, the city looks nicely maintained, has a well laid out street plan and would be a nice place to live. It has a population of over 300,000. The park located slightly off center-left contains a very large statue of Kim Il-sung.

Finally, we have a vast vacation compound in the port city of Wonsan. 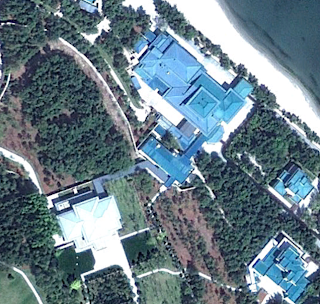 I have zoomed in on Kim Jong-il's villa.[3] The grounds contain a number of large homes (you can see two of them on the right side) which are for government officials and guests. The two largest homes both belonged to Kim Jong-il. When he died Kim Jong-un demolished a number of his father's homes but so far this one has remained intact and will likely be used for years to come.