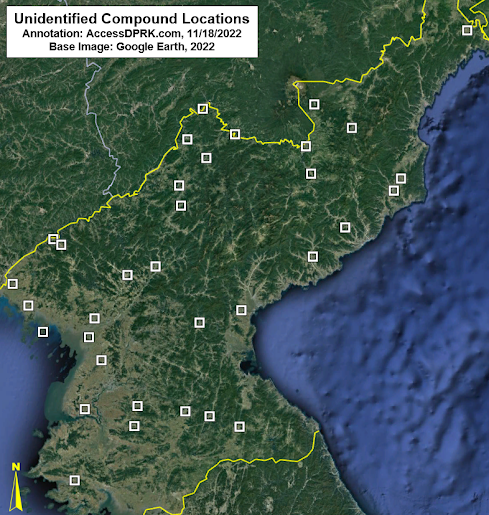 Normally I don't like to write posts about unidentified things. Plenty of speculation exists about what goes on in North Korea as it is, and I keep this page updated with small finds that I am curious about. But I am very interested in discovering the point behind what is a nationwide project, not simply a single site. So I want to have the space to describe what I've found in as much detail as I can, offer a few ideas, and reach out to the public for any additional information that may exist.

Earlier this year I came across a site in Hyesan that looked a lot like a newly constructed prison. Although small, it had a wall, an outer perimeter fence, and guard posts. I couldn't find any news stories about new prisons being constructed and I didn't know of any other examples, so I wrote a small write-up in the AccessDPRK Monthly Digest which is sent out to Patreon supporters as an "interesting find".

Months later I found another similar facility and then another. Currently, I have 34 located. 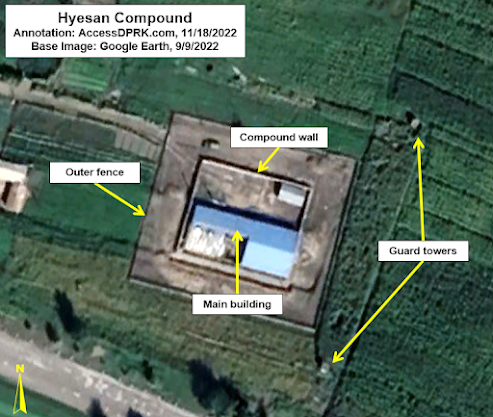 They all share a few similar characteristics. They each have one (typically) small central building, that building is surrounded by a wall, and that wall is then surrounded by one to two layers of fence. There is also a guarded entrance into the fenced area, and there's at least one guard tower somewhere in or around the complex.

Sixteen of the thirty-four sites are built around previously existing buildings that had an unknown original purpose; although, they are associated with nearby agricultural activities. Additionally, most sites are located along the outskirts of the town they're in.

Nearly all of the sites consist of one or two small buildings within the walled section, but the largest is located in Unsan (40.112068° 125.922696°) which is a whole complex of previously existing buildings that have a combined footprint of approximately 1,400 sq. meters. The smallest ones take up a mere 90 sq. m. while most fall between 130 and 200 sq. m. 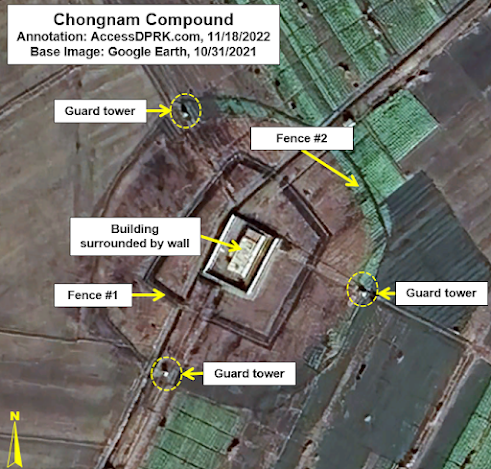 As well secured as these sites are, most are basically the same size as a modern middle-class house you might find in Denmark or Japan, with the larger sites being of similar size to a house in the United States. With that in mind, their size makes the idea of them being jails less probable. Particularly as every county in North Korea already has detention centers as part of Ministry of Social Security and Ministry of State Security facilities.

Standalone provincial prisons and the more well-known prison camps are also substantially larger than these sites. And, so far, most major cities lack these new facilities while several small towns have them, adding to the mystery.

If they're not jails, another option is that they're quarantine facilities for those who test positive for COVID-19.

North Korea has created a number of quarantine facilities throughout the country over the course of the COVID-19 pandemic as towns and regions would be placed under lockdown. These sites typically take the form of special hospital wards or commandeering existing facilities and re-tasking them for the purpose of medical isolation.

Under the authority of the State Emergency Anti-Epidemic Command, the Ministry of State Security and the Military Security Command have been given charge of enforcing the government’s anti-pandemic policies and ensuring quarantine measures are followed. Quarantine in the country has taken the form of keeping individuals quarantined at home, establishing mobile response units, and creating stand-alone facilities that can take in quarantined individuals and provide them with basic medical support.

Despite two years of state denial that the illness was in the country, numerous reports have been noted of “fevers” striking one city or another throughout the pandemic. However, all of that changed in March 2022 when the government officially acknowledged that there were COVID-19 cases in the country and further admitted to millions of other cases of a rapidly spreading “fever”.

Regardless of Pyongyang’s new willingness to discuss the presence of disease among the population, many experts believe that COVID-19 has existed in North Korea almost as soon as the virus began to spread out of China, and lockdowns have been noted throughout the country including in Pyongyang, Kaesong, and, of course, Hyesan.

According to DailyNK, “Chapter 2 of Article 16 of the emergency quarantine law calls on central health authorities, local people’s committees and other relevant bodies to create quarantine facilities “in keeping with quarantine and containment demands” to separate and isolate infectious disease patients, suspected cases and contacts.”

And in 2022 it was reported that the government was going to start building permanent sites to isolate and treat patients; whereas many of the previous locations were temporary and only lasted for as long as a local outbreak did. But as "fevers" have been spreading sporadically since the very beginning of the pandemic, it's likely that the government had already embarked on constructing purpose-built quarantine facilities regardless of their public admissions.

As North Korea's healthcare system is broken and Kim Jong Un has refused to import vaccines, the country's only real line of defense is to isolate people.

So, could these be quarantine centers? The fact that nearly all of them have been built after the pandemic began and are often positioned outside of a town's urban area would support this notion. But they are still quite small and would ideally need to include a patient ward, room(s) for administration and offices, a supply room, and bathroom facilities.

If the government feels COVID is an existential threat to the country, every effort should be expended to ensure proper treatment and safety. One might look at the emergency hospitals constructed in Liberia during the 2014-2016 Ebola outbreak or pop-up centers built in the rest of the world during the early stages of COVID. The main Ebola treatment center in Monrovia, Liberia during the 2014-2016 outbreak.

These small, single-building compounds, while secure, do not seem like the best facilities to serve as medical sites. Nonetheless, it's hard to come up with alternate explanations for their construction.

Other possibilities are that they're military storage sites (such as for ammunition), grain facilities, or perhaps even barracks to house mobilized workers doing local construction.

I don't think they're any of those three things.

These sites are not located within military bases, and they lack the protective earthen berms used to contain explosions in the event of an accident that are common to such storage sites.

The design of grain facilities is fairly well understood, and they are considerably larger as well. Although they do have perimeter walls, they do not have a second layer of fencing and they are comprised of multiple buildings. The AccessDPRK 2021 Map has around 900 of these sites located. 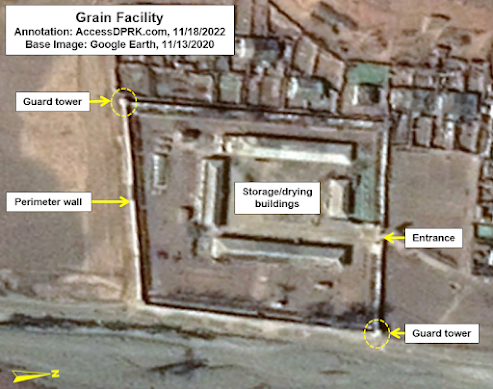 Lastly, the I am not sure why a mobilized labor unit would need to be housed behind fences. Temporary worker's housing and workshops are a regular feature of construction sites, and they lack defined boundaries (like fences or walls). And even though mass labor may not be entirely voluntary, the camps are hardly treated as dangerous places in need of tight security. Additionally, I haven't noticed adjacent construction work at any of the identified locations.

I have reached out to several individuals and organizations involved in human rights and imagery analysis for comment and almost no one even knew of their existence, let alone what they were for. So the main purpose of this article is to call attention these sites and to describe them as best as I can.

I still believe that they are some kind of detention center. Perhaps to quarantine positive COVID cases, perhaps as part of a larger rejuvenation of the country's penal system, or perhaps for something else. Unfortunately, in this case, it's difficult to come to a confident conclusion based on satellite images alone. Once more concrete information comes to light, I will update the article accordingly.