I have written about the "lost history of Korea" before but I wanted to give an update as the original article is now eight years old and I've made a lot of mapping progress since then. 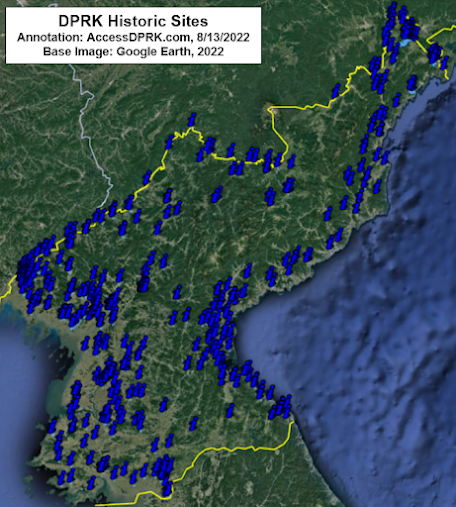 With the artificial division of Korea in 1945, both sides will have developed distinct modern archeological histories as the two sides have grown more and more distinct. But this division also left thousands of years' worth of joint Korean history within the confines of North Korea. As a result, numerous sites are largely unknown to the English-speaking world and much of the archeological research that was done prior to the division was done while Korea was under Japanese occupation, making it outdated and its results subject to the Imperial ideology of the day. Likewise, any research done in North Korea subsequently will be tainted by the current government's ideological narratives; and there are serious questions about the quality and reliability of North Korean archaeology as a practice.

Most North Korea watchers are aware of some of the major archeological sites in the country. The ancient capital of Kaesong and the Royal Tomb Complex of the Koguryo Dynasty - both UNSECO World Heritage Sites. There's also religious relics around Mt. Myohyang, pieces and pavilions of the wall that once encircled Pyongyang, and the alleged tomb of Tangun, the legendary founder of Korea.

North Korea has a list of 193 sites designated as National Treasures, with these including major tombs, fortresses, temples, pagodas, and other tangible sites. There is also a list of 1,800 other culturally important items such as steles and sites that no longer exist. Unfortunately, most of these lack exact locations and are also small objects (steles and stone pagodas may not be visible at all by satellite), and so most of these locations have gone unmapped by AccessDPRK but I have endeavored to locate the ones possible.

Through the work for AccessDPRK, I've noted well over 400 historic sites. Additionally, I have located over 900 large burial mounds. Most of the burial mounds will date to before 1910 and could hold troves of valuable cultural, religious, and political history going back generations.

While many of these locations will likely be known to Korean historians and archeologists, most will not be known to English speakers and there's very little information about them in English.

I've been able to map enough sites, that the paths of major walls become very visible and the map is sprinkled with smaller finds as well. 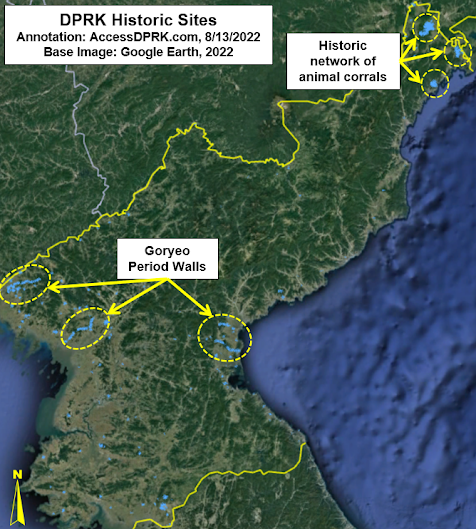 In the above image, the paths of large defensive walls can be seen. These stone walls date to the early 11th century and in some parts have substantial remains. The walls originally extended across the whole peninsula but their remains along the mountainous spine of Korea have eroded to such an extent that they can't be mapped using the available satellite imagery. However, a series of forts still remain and their locations can help us chart the original path of the walls. 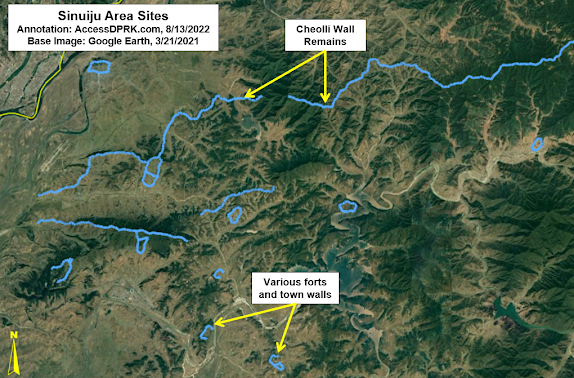 Various fortified sites near the city of Sinuiju in North Pyongan Province.
Other light blue splotches on the image are the larger forts and walled cities that still have obvious ruins like the fortress walls of Anak (with the Goguryeo Anak Tombs nearby) and the city walls of Kuup-ri south of Wonsan. 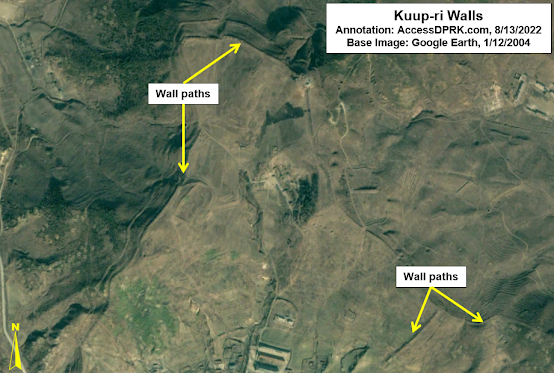 One other thing I want to focus in on that's noted on the earlier map is a network of what I have surmised are a series of animal corrals/pens. These are complexes of low stone walls that create large, interconnected enclosures that have small circular paddocks interspersed between the larger enclosures. The enclosed areas are irregular in shape and can encompass several square kilometers, while the circular paddocks are only around 70 meters in diameter and are fairly consistent in shape and size. 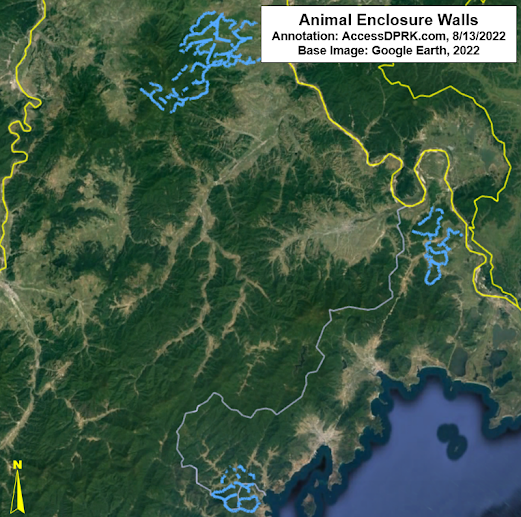 I have been able to locate over 172 km worth of enclosure walls within these three areas. 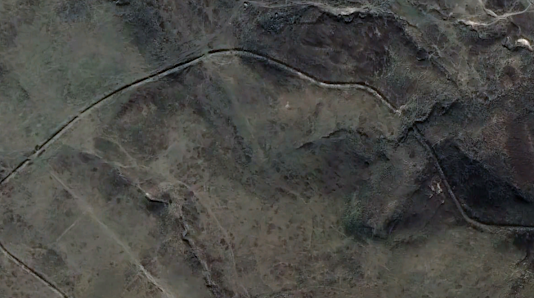 Close-up view of an enclosure wall. 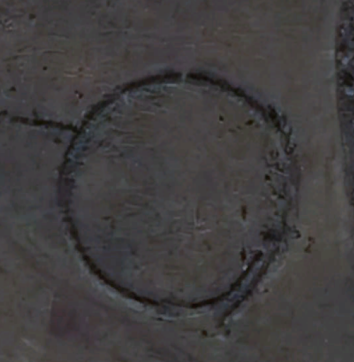 Example of a circular paddock.

I have reviewed nearby areas in China and Russia to try to find additional sites, but these three complexes are the only ones I have discovered. No others seem to exist in North Korea either.

They share certain similarities with ancient hunting or livestock control systems in other parts of the world, but the precise nature of the paddocks also makes me think they could be 19-20th century creations.

I haven't been able to find any information at all about these sites and would love the input of a Korean archeologist or historian. Are these even known about? 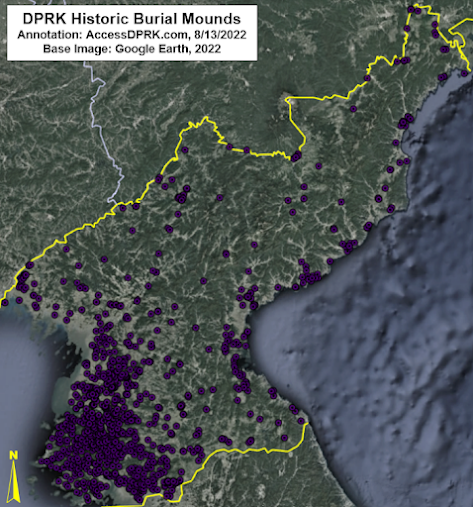 These burial mounds are not modern and are not part of the mass graves related to the 1990s famine.
With over 900 of them located, one thing that becomes immediately obvious is the huge concentration of them within South Hwanghae Province and the west coast of South Pyongan Province.
There are smaller clusters around Kaesong and Pyongyang, both historic capitals of Korea, and there are individual mounds throughout the rest of the country, but South Hwanghae has over one third of all of these large burial mounds.
Among the burial mounds are well-known sites like the Royal Tombs of the Goryeo Dynasty in Kaesong which span nearly 5 centuries, and the Han Dynasty tombs next to the April 25 Film Studio in Pyongyang, reflecting a time when China directly controlled parts of Korea and held influence over the rest of the country.
But many other historic tombs within North Korea are not the tombs of emperors or Chinese dignitaries. They belong to members of the lesser nobility, large landowning families, and possibly even important local merchants up to the point that Korea was divided.

Examples of various large burial mounds from around the country.
Although there is a tendency within communism to destroy the past, and every country within the former Soviet Union and throughout the rest of the communist world engaged in cultural "cleansing" efforts, these burial mounds have managed to survive and are even maintained by local authorities.
Pyongyang vilifies 20th century landowners and the imperial system of Korea's monarchy, but they still rely on ties to the ancient past to legitimize the Kim family and their right to rule. So, while plenty of places have been neglected (and many more destroyed during the Korean War), one can still find numerous examples of that past throughout the country. 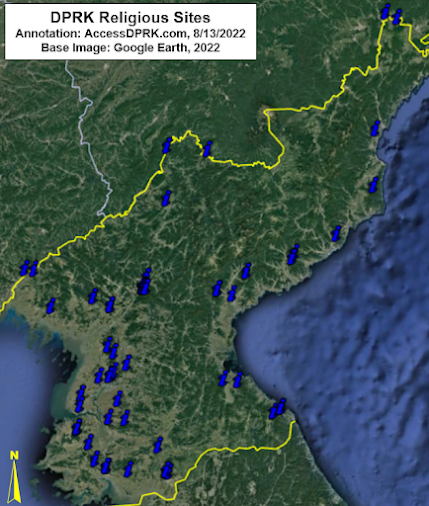 Some of the remaining temple sites in North Korea.
Buddhism came to Korea in the 3rd century. One of the oldest temples in North Korea is the Anguk Temple (39°18'2.00"N 125°49'35.00"E) which was founded in 503, and it's listed as National Treasure #34. Unfortunately, like many of the approximately 400 temples in northern Korea at the time, it was destroyed by allied bombing in the war.
Kim Il Sung's suppression of religion was also responsible for the abandonment of numerous religious institutions, continuing a long decline within Korean Buddhism and attacking ascendant religions like Chondosim and Christianity. However, surviving sites have been maintained as cultural relics and some important locations have even been reconstructed such as Anguk Temple, with at least one Catholic abbey building surviving as part of the Wonsan University of Agriculture.
These "relics" include popular tourism sites such as those within the Kumgang Mountain region and Mount Myohyang, while others are tucked away in difficult to access forests. The Wonmyong Temple near Huichon is one such example (it, too, was reconstructed after 2000). 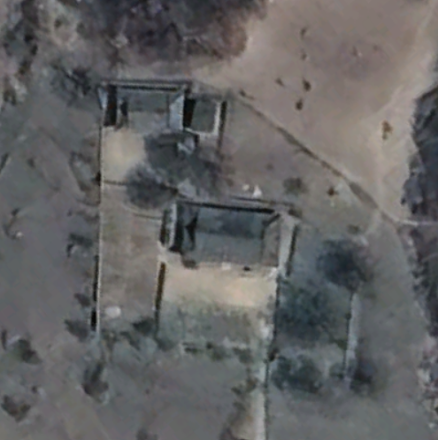 Wonmyong Temple, April 17, 2022.
Within the AccessDPRK 2021 Map are also sites that could be part of not just Korean history, but the history of the whole region.
I have noted 16 potential hillforts. These irregularly shaped piles of stone and rubble are similar in appearance to Celtic oppidia in Europe and other such fortifications elsewhere. Although dating can't really be done by just looking at satellite imagery, if they are early fortifications, their history could go back to the Three Kingdoms Period or even earlier. 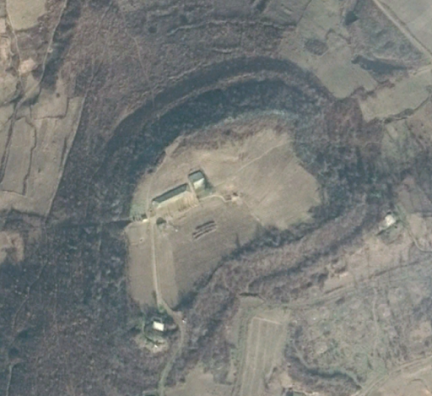 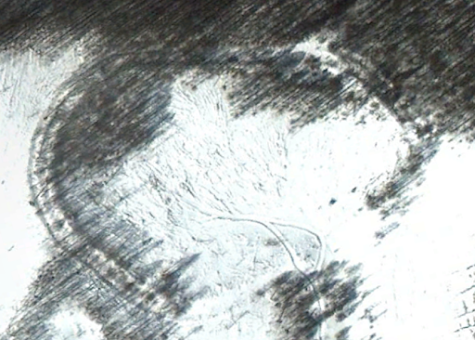 The future of archeology in North Korea depends entirely on the government cooperating with outside organizations and academic communities to bring the richness of this history to the world's eyes. And, whenever the Kim regime does fall away, archeology will have decades of additional material to look at.

Researchers will need to look at mass graves to determine the extent of famines and public executions. They will need to go to disappeared prisons to give voice to the thousands of lives that were destroyed in them and to verify the crimes committed by the government. They will also have the mass human activity of monument and palace building (and removal) as a means to track the path of propaganda and its impact on people's lives and the economy.

Until then, most of us in the outside world will only have satellite images to peer into thousands of years' worth of history.

In the spirit of openness and furthering our collective knowledge, the historic sites are available in the Free Version of the 2021 AccessDPRK Map (KMZ file). If any knowledgeable person has verifiable information about the sites, please get in touch with me.