In North Korea Thousands of Guns Point to the Sky 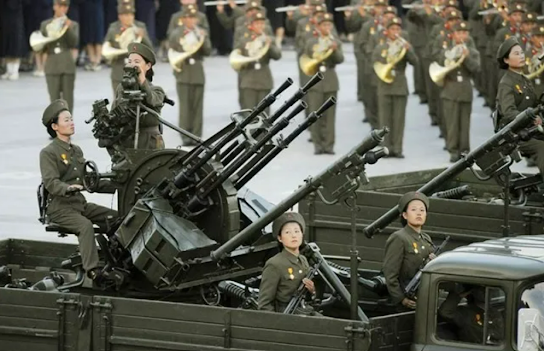 An M-1983 Quad 14.5 mm anti-aircraft gun being shown during a parade in this undated image.

Between the AAA and SAM batteries, over 1,500 fixed air-defense sites are arrayed to protect North Korean airspace (squeezed into an area half the size of England).

In this article I will focus on the current capabilities of the county's anti-aircraft artillery, but I'll also touch on their surface-to-air missiles as well.

These guns have a practical rate of fire of between 150 and 1,600 rounds per minute per barrel, with effective ranges of 2.5 to 5.8 km depending on which system is being used.

AAA batteries are typically laid out in two arrangements, the "daisy" and what I call the "I". 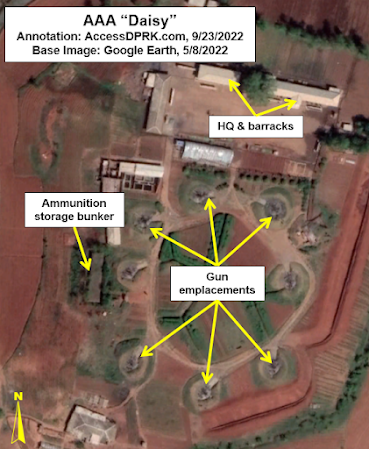 Example of the "daisy" layout.

Daisy arrangements refer to a circular configuration of guns. They range in size from 4 to 12 guns and may form a "chain" of daisies, with 2-3 sets of four guns each or they may simply be a single circle of guns.

According to George Herbert, adjunct professor at the James Martin Center for Nonproliferation Studies, AAA guns in this arrangement lie within a targeted environment (such as near the Yongbyon Nuclear Center) and can protect it from threats coming in from any direction. 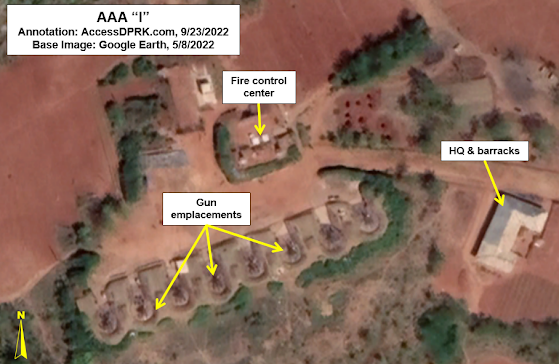 Example of the "I" layout.

The second primary arrangement for AAA guns is "I". These are just a single straight line of guns. All but one of the "I" layout sites deploy 8 guns.

Mr. Herbert explains that this arrangement is best for firing at aircraft that still lie outside of the main target, such as on the approaches to Pyongyang, but before they actually enter the city's airspace, and can concentrate the fire from multiple guns onto the enemy aircraft.

There are 70 of these surrounding Pyongyang in an oval ring 25-30 km outside of downtown.

The country's air defense is constructed using a layered approach. The DMZ and each coast has a line of AAA batteries along them with the main coastal cities then being encircled by their own ring of defenses. Interspersed in other parts of the country are the batteries for major KPA bases, navy and air bases, missile sites, industrial centers, and key palaces. There are also a few others scattered around the country at seemingly random sites.

Nowhere is this layered defense more obvious than at Pyongyang.

As the nation's capital city, Pyongyang is the largest population center, is where all of the main military command centers are located, and it contains the greatest concentration of industry making its capture a primary goal in any war.

Pyongyang has over 400 AAA batteries arrayed in three main lines of defense, and it is also protected by two outer rings of 19 surface-to-air missile batteries as well. 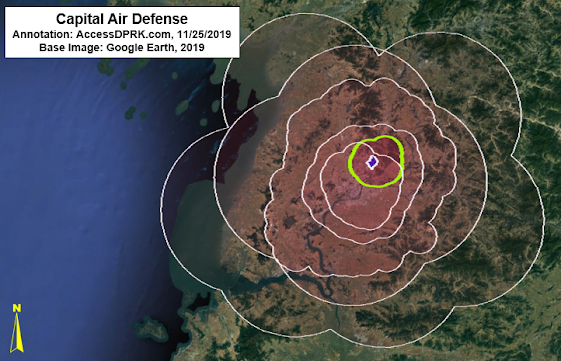 Illustrative map of the main AAA and SAM defensive ranges (approximate distances) around Pyongyang, with the Ryongsong Palace highlighted in blue. The yellow ring is the palace's dedicated air defense ring.

Within Pyongyang is also the Ryongsong Palace complex. Nestled within Pyongyang's air defense space, the palace is surrounded by its own dedicated ring of AAA batteries and is covered by at least 5 nearby SAM batteries, making the palace perhaps the most well-defended single site in the world.

All of these overlapping clusters also end up creating a thicket of AAA sites within the "Kaesong-Munsan" invasion corridor. This would be the most contested stretch of airspace as it is the most direct path from connecting the capitals of North and South Korea. The corridor is roughly 50 km wide and 155 km long, stretching from the DMZ up to Pyongyang. 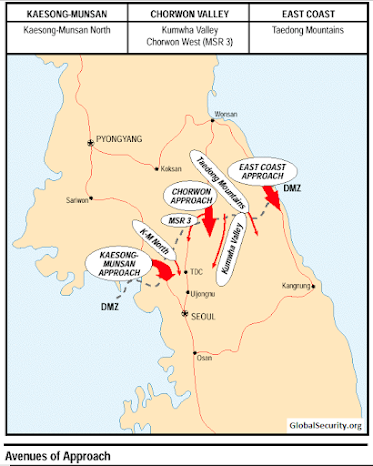 In any given 5 km circle (the maximum range of most AAA guns) a pilot would only have three, perhaps four, brief moments where they weren't in range of any guns if they were flying through the center of the corridor. Of course, where AAA may not reach there are still the dozen+ SAM sites that lie within the corridor and whose ranges are between 25 and 300 km depending on the missile system being used.

Point to the Sky

Nationwide, North Korea currently has 1,463 active AAA sites. These batteries have the capacity to field 8,641 individual artillery pieces. Each battery consists of anywhere between a single gun to up to 12 guns. The majority fall in the 6-8 gun range. Not every fixed position has a gun in it at all times, but around 90% do. This means that at any given moment there are 7,777 artillery pieces ready to fire.

There are also 521 known decommissioned sites. Having decommissioned sites mapped is important, particularly within the public sphere, in order to have accurate maps available. Many of these older sites haven't been demolished, merely closed, and so they still look like they could be used. That has led to some of them being incorrectly identified as active on other databases (like OpenStreetMap and Wikimapia).

Additionally, knowing when sites are closed or newly constructed allows researchers to better track trends in air defense strategies (among other things). 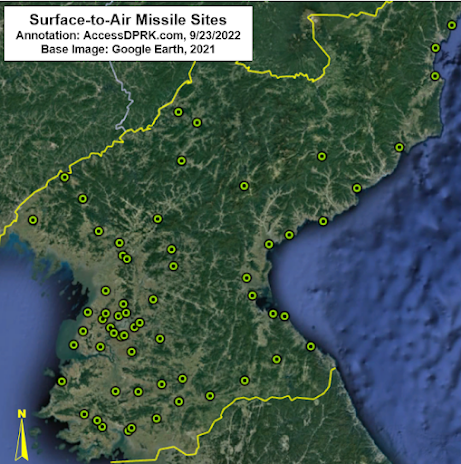 The country also maintains between 57 and 61 surface-to-air missile batteries, with two of them being modern constructions. Most field S-25, S-75, and S-125 systems that are from the Soviet-era. North Korea has attempted to develop their own SAM systems with the KN-06 and KN-30 which are clones of Russian S-300 and S-400 SAMs. However, despite being promoted in official state media, these mobile systems haven't yet been verified to have been fully deployed through open-source imagery and publications.

Between AAA and SAM sites, approximately 75% of all of North Korea's airspace is covered using conservative measurements. The largest gaps in coverage are in the highly mountainous border areas with China and access to those gaps would require either flying in from China or making it through already defended areas.

An updated explorable map of North Korea's air defense sites is available through purchase of the AccessDPRK Map (Pro Version).