Update on the Pakchon Uranium Mill

The Pakchon Uranium Concentrate Pilot Plant is the first uranium concentration plant in North Korea and is one of only two known to exist, the other being the Pyongsan plant. 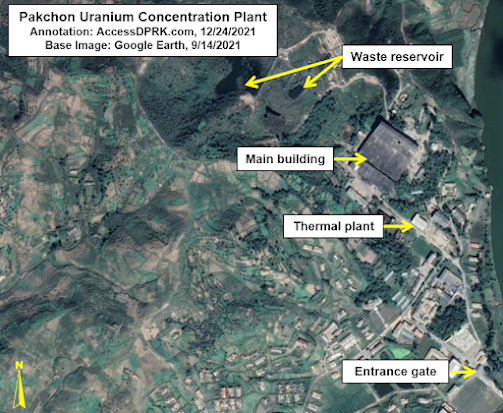 Operations at Pakchon take uranium-bearing ore (usually from coal) and concentrate it into 'yellowcake' which has a uranium concentration of 99% pure U-238, a low radioactivity, long half-life form of uranium. From here, it is sent to other sites (such as Yongbyon) where it is converted into highly enriched U-235 which can be used for bomb production.

However, its operations have been scaled down and it has been in caretaker status since perhaps as far back as 2002.

But although uranium production has been shunted to the more modern Pyongsan, Pakchon's caretaker status certainly doesn't mean abandoned. Recent satellite imagery suggests at least some limited operations are still ongoing and that the regime has been fairly active in maintaining the complex. The continued importance of Pakchon in the country's nuclear program is evidenced by the fact that the United States was interested in having it permanently closed and dismantled as one of five nuclear facilities offered up by North Korea in exchange for sanctions relief.

When I first wrote about the site in 2019, I noted two buildings that were either being demolished or that had been left to fall apart. Since then, commercial satellite imagery from Sept. 14, 2021 shows that one of those buildings has been completely reconstructed. Additionally, a repaired section of roof on the main milling building can be identified.

The imagery also shows that the complex's administrative section has seen construction and that the waste material reservoir is still being used.

The nearby mine that provides uranium-bearing ore has also been continually active. Whether it's sending its full production to the Pyongsan Uranium Mill or diverting small amounts to Pakchon, I can't say, but the improvements made at Pakchon suggests that the ore from the mine would likely one day be sent back to Pakchon if it becomes reactivated in the future.

Taking these changes one-by-one, the first I'll talk about is the reconstruction of the thermal building which provides extra electricity for the plant. 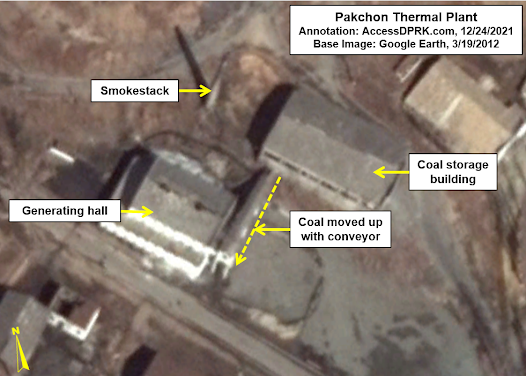 In the above image from 2012, the thermal plant complex is clearly visible. Coal is housed in the bulk storage building where it is then moved uphill via a conveyor belt to the generating hall. The coal ash is then dumped outside of the building in a pile next to the conveyor where it accumulates until removed.

In 2019, the generator hall was being demolished. 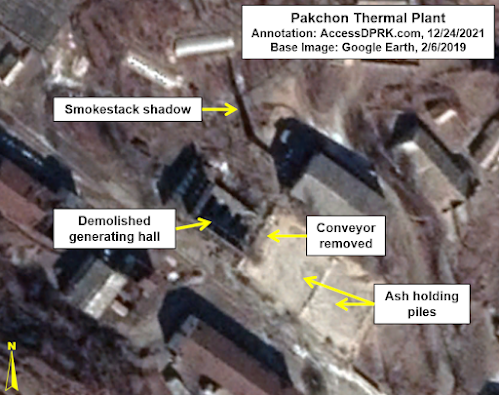 By October 2019, the generating hall had been torn down to its foundations.
There is a gap in the Google Earth imagery, but by September 2021, a new structure can be seen. 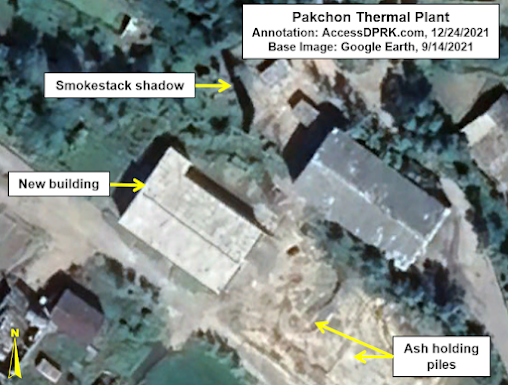 The absence of a conveyor system, either above or below ground, suggests that construction to modernize the plant may not yet be complete.

Nearby are two other unidentified support buildings that have been left to fall apart. 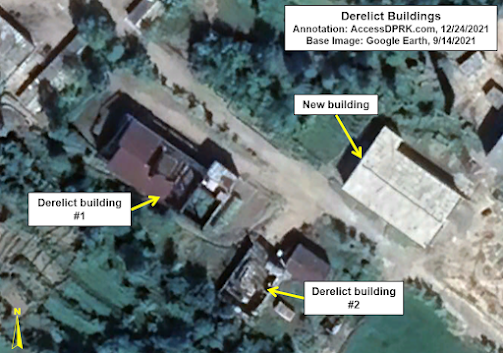 Building #1 has a partially collapsed roof while building #2 is missing its roof entirely. 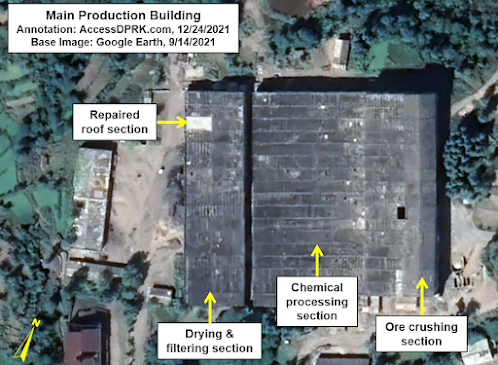 In this image, from right to left, you can follow the production process as described by the Center for Strategic International Studies.

The September 14, 2021 image also shows that a section of roof has been repaired in the section of the production building that is responsible for drying and filtering the yellowcake uranium before it is shipped out. 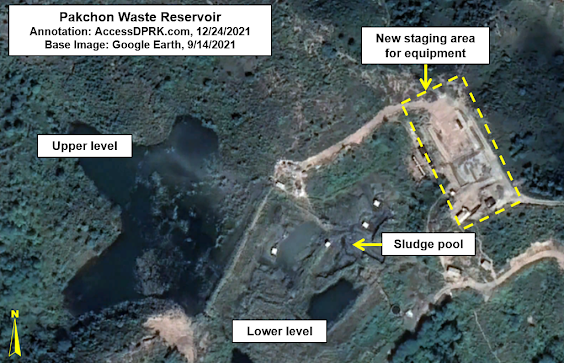 Pakchon's waste reservoir is split into two reservoirs, an upper and a lower one, divided by an earthen dam. The area of the reservoir that is filled with waste is approximately 3.4 hectares, with the upper section usually being filled with water and the lower section containing sludge and newer waste materials.

While the size of the reservoir hasn't changed in at least 17 years, the sludge pool has seen continued activity, particularly in the last few years.

Beginning in 2019, a new staging area was constructed to accommodate vehicles and other equipment involved in the management of the reservoir. The staging area covers roughly 2,900 sq. .m.

One other section of the Pakchon complex that has seen recent activity is in the administrative area. In 2019 a new theater/assembly hall was constructed over the course of the year. 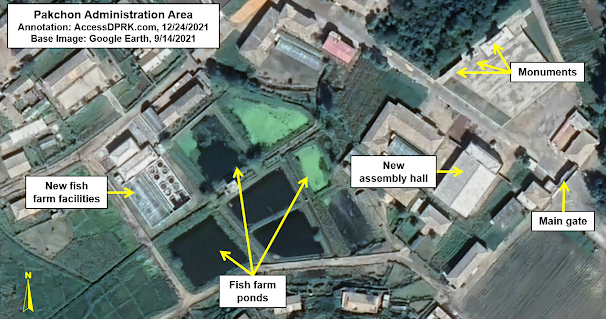 The new hall is on top of substantial construction work that happened between 2008 and 2012, when nearly every current structure visible was either renovated or added.

Additionally, the fish farm that exists next to the administrative area had more modern facilities built in 2019-2020. These fish farms can be found throughout the country and help provide needed protein to local workers, military personnel, and the fish can even be exported to earn the country foreign currency.

While none of this activity suggests full-scale operations have resumed at the concentration plant, it does support the idea that, like Punggye-ri, the site remains part of the country's nuclear program and may be ready to resume limited production should the order come.

As Joseph Bermudez wrote for CSIS back in 2019 about the low-level activity that can be observed, "the most likely explanations for this activity would be small processing runs of iron-bearing ore of some type, caretaker maintenance work, or decommissioning of equipment within the plant."

However, with the newer imagery and changes, I would like to suggest that some of the activity could be part of pollution mitigation efforts or reprocessing older ore/waste material to extract small amounts of formerly discarded minerals (an activity seen at certain mining sites in recent years).