While Kim Jong Un was busy issuing orders to reconstruct the city of Samjiyon, to build kilometers of beachfront resorts in Wonsan, and constructing a new hot springs facility in Yangdok, he wasn’t going to neglect Onpho in the process.
Nestled in a valley a few kilometers northwest of the city of Kyongsong in North Hamgyong Province, the Onpho Holiday Camp, a hot springs resort, has been popular among the country’s elite for decades.

The original facilities at the Onpho hot springs resort as seen on Sept. 29, 2017.
It is one of the oldest and largest such facilities in the country and has been visited by each generation of the Kim family. It is so popular to the elites that a secured villa complex was built next to the general spa area and a special “leadership train station” was added around 2010 to allow for speedy and secure transportation to the relaxing hot springs and mountain air that flows down into the valley.
However, during Kim Jong Un’s visit to Onpho in July 2018, he lamented “its very bad condition, saying bathtubs for hot spring therapy are dirty, gloomy and unsanitary for their poor management.”
By October, Google Earth images revealed that the resort was being renovated as temporary worker’s housing was visible as well as the land being cleared for new buildings. 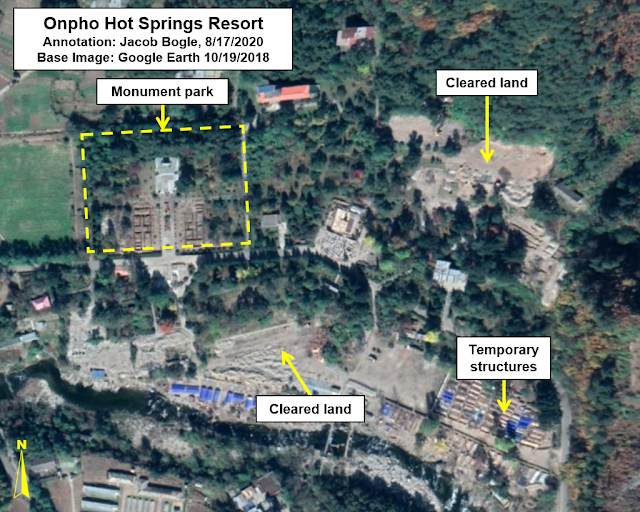 Initial work activity at the resort in October 2018, with various temporary structure like worker’s huts and workshops visible.
After that initial activity, construction slowed down and little had been accomplished five months later in March 2019. That lull quickly changed as by September, at least fourteen buildings were under construction in the main resort area and a dozen multifamily housing structures were also being constructed across the river for employees of the spa.
During Kim Jong Un’s 2018 visit he mentioned that the bad condition of Onpho would “commit a sin” by drawing criticism from the people in a place that was so important to Kim Il Sung and Kim Jong Il. Testifying to Onpho’s importance, it has an entire park and monument dedicated to the “exploits of the great leaders” with regard to the establishment of the resort.
The historic importance of the resort was commented on by the Korean Central News Agency back in 2015 when they stated that Kim Il Sung had visited the natural hot springs at Onpho as early as 1946 and ordered it be turned into a holiday camp. He then visited and gave “field guidance” a further twenty times, followed by visits by Kim Jong Il including one trip in 2008 after the area had been hit by flooding.
Kim Jong Un has made it a key feature of his rule to (attempt to) improve international and domestic tourism by spending hundreds of millions of dollars – perhaps a billion or more in total – constructing numerous tourism related facilities across the country including a $35 million ski resort, converting the Wonsan-Kalma area into a major tourist region (which included an estimated $200 million reconstruction of the Kalma International Airport), and more recently, discussing the need to modernize the Mt. Kumgang Tourist Zone that was opened as a joint project with South Korea back in 1998.
All of this, of course, despite the fact that North Korea doesn’t have hordes of foreign visitors to fill up those thousands of hotel rooms now available nor does it have a strong enough domestic economy to sustain all of the resorts with predominately local tourists.
However, the fact that Onpho plays a role in the Kim family personality cult and that it has been a longstanding feature the state could point to as evidence of Kim Il Sung’s love for the people, it makes sense that Kim Jong Un would want to renovate such a place that had become dilapidated.
Unfortunately for the regime, economic pressures don’t care about prestige projects and there has been very little new construction during all of 2020 as late as July.
The combination of existing economic problems and the added pressures relating to the COVID-19 pandemic have caused considerable difficulties for the country. As a reflection of this, it was reported by DailyNK on April 23 that the regime sent out a jointly signed document by the Cabinet and Central Committee of the Korean Worker’s Party decreasing the number of “national construction projects” from fifteen to just five.
While the report didn’t say what those fifteen projects were, two of the remaining ones are undoubtedly the Pyongyang General Hospital and the Tanchon Hydroelectric Project. Both have experienced funding and material shortages, with Kim Jong Un lashing out at officials over mismanagement regarding the hospital’s construction.
Onpho may be an ideologically important site but it isn’t fundamental to the country’s health or electricity needs, so the lack of construction this year may well be a reflection of economic problems and the April “joint decision document” cutting back on less practical projects.
The one area inside the large resort complex that hasn’t seen any renovation, somewhat conspicuously, is the leadership villa compound adjacent to the main spa facilities. This walled compound contains a primary palace building and six smaller villas. 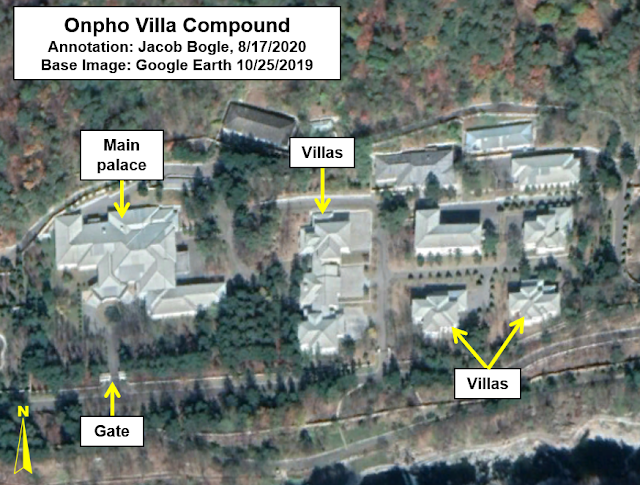 The villa compound at Onpho.
After Kim Jong Un came to power, he wasted no time making improvements to a number of leadership residences including the addition of runways (such as at Hyesan and Changsong), he completely rebuilt villas within the “Forbidden City” district in central Pyongyang, and he undertook multiple changes to the Kim family primary Ryongsong Residence complex.
Nonetheless, what can be seen from commercial imagery does show substantial changes occurring at the holiday camp area. In addition to the hotel buildings (each around seven-stories tall) and new personnel housing, three unidentified but large buildings are also under construction. Located on the banks of the river, the three buildings have a combined footprint of approximately 6,814 square meters and are each multistory buildings. 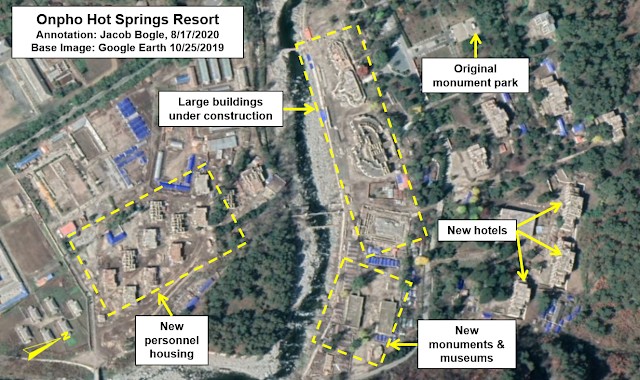 Google Earth image showing the status of renovations on October 25, 2019.
Additionally, a new monument area has been constructed that, as of the most recent Google Earth imagery, has two monuments and two buildings that are likely “revolutionary history museums” dedicated to Kim Il Sung and Kim Jong Il. Such monuments and museums are common to ideologically important places and places that have received multiple visits by the leadership. And in true North Korea fashion, this portion seems to be the first new part of Onpho to have been completed; the final landscaping touches being visible by July 2, 2020.
Construction may have been stalled due to unforeseen events, but the addition of Onpho to the long list of recreational facilities that Kim Jong Un has either built or modernized shows that “bread and circuses” are still a central tenet of his regime. From diplomatic maneuvers to testing missiles, to spas and rebuilt towns, every dictator needs a well-rounded legacy to go along with the less-than-voluntary labor it often takes to build these places.
I would like to thank my current Patreon supporters: Amanda O., Anders O., GreatPoppo, Kbechs87, Planefag, Russ Johnson, and Travis Murdock.
--Jacob Bogle 8/20/2020
AccessDPRK.com
JacobBogle.com
Facebook.com/accessdprk
Twitter.com/JacobBogle
Posted by Jacob Bogle at 10:32 AM