Researching North Korea's economic development is always fraught with difficulties. The state offers very little in the way of concrete data, and state media predominantly focuses on single items (like a factory or amusement park being built) and gives exaggerated reports on national trends. At least, until Kim Jong Un came to power.

While the amount of reliable information is still sparse, Kim Jong Un has broken with tradition and hasn't been afraid to speak openly about the difficulties facing the country. He has even blamed the bureaucracy itself on occasion instead of always chalking up problems to sinister western forces or on a single bad administrator. 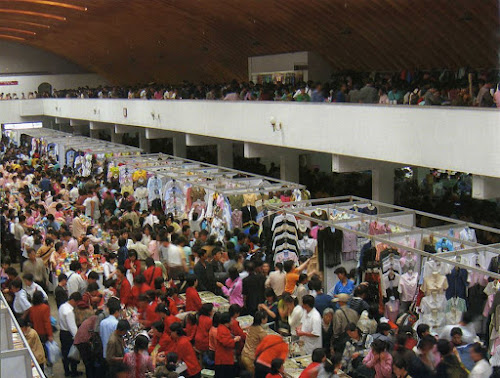 It is clear that the people's lives have improved since the days of Kim Jong Il but to what extent that trend has carried on into the last few years is murky and appears to be fairly uneven. How much the civilian and military economies have undergone structural changes under Kim Jong Un is likewise murky. However, all one has to do is pull up Google Earth to see billions worth of construction activity over the years, and to examine their missile tests to tell that Kim has certainly surpassed his father in the military sphere.

Now, before you start accusing me of calling Kim Jong Un a reformer, I'm not. But it is irrefutable that his governing style - while still autocratic - is somewhat different from that of his father's. Many of the obstacles and opportunities facing this generation are also fairly different than the ones facing the famine generation, so, naturally, the economic dynamics are going to change.

Markets for things like handicrafts have always been allowed in North Korea, but markets for selling grain, consumer goods, etc. were forbidden. That all changed during the course of the famine when farmers' markets popped up along roadsides across the country as people picked survival over obeisance to the state. In turn, the government has sought to regulate them (thus giving tacit approval to their operation), and according to the Center for Strategic and International Studies (CSIS), the state earns between $60 and $70 million annually from fees and taxes imposed on the markets as of 2018. Over the past decade or so the number of approved markets has roughly doubled, and as of this year, I have been able to identify 443 of them. 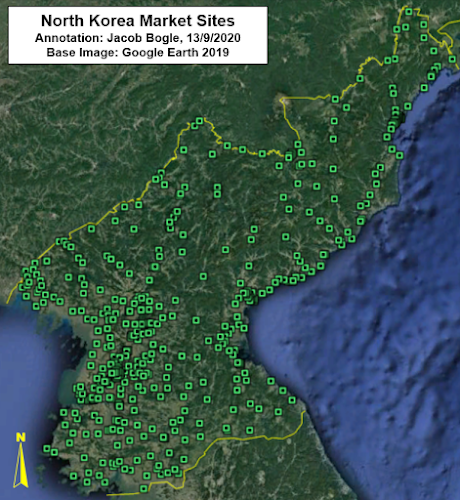 This implies a fairly robust civilian economy, even if it is faced with numerous obstacles (particularly in 2020 as the result of COVID-19 and after multiple typhoon impacts). Specifically, the service sector, retail, and construction have all been growing drivers of the economy for at least a generation.

How much of this can be attributed to the fact Kim was left an "inheritance", reportedly worth up to $5 billion, that he was able to invest in weapons and economic construction, how much is due to illicit trading activities, and how much may be due to a civilian economy that has become even more market-oriented despite the regime's protestations can't fully be known. Regardless, the results are the same.

To demonstrate that the civilian economy is still growing despite internal and external economic pressures (including sanctions), I want to show some changes that can be seen in 23 markets across the country. (A list of these markets can be found at the end of the article.)

These changes have all taken place from 2015 to 2019 and includes markets in major cities and in more rural areas. The changes are: the building of entirely new markets and the expansions of existing ones. 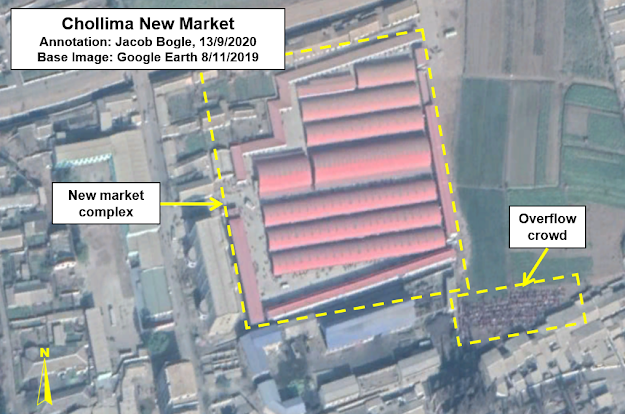 Additionally, since 2015 at least eight other markets have undergone relatively substantial expansions, and two more were converted from open-air markets to being housed in buildings. Between the expansions and added covered floor space, the total additional area equals 18,906 sq. m (203,502 sq. ft.).

According to CSIS, the largest market in the country generates the equivalent of $36/sq. m in revenue to the government each year. If we make a simple assumption that these new spaces will generate only $15 per square meter, that still represents nearly an extra $1 million a year going to Kim Jong Un's coffers (solely from fees and taxes at the markets). The regime generates additional revenue through the process of transporting goods, trading permit fees, paying bribes to border guards and officials, etc.

The fact new markets were also built after 2017, when economic sanctions against North Korea reached their height, tells us that the country's domestic economy and illicit trade is likely more robust than is generally thought.

This is backed up by Panel of Expert reporting by the United Nations that claims the country could be illegally importing three to eight times the amount of petroleum products it is legally allowed. That also helps explain how the regime has been able to build scores of gas stations in recent years which are estimated to consume the equivalent of the country's entire legal fuel import amount. Other illicit trading involves coal, seafood, and even sand exports.

And while COVID-19 has placed a tremendous strain on the economy, North Korea is still managing to build the largest hydroelectric project in its history, construction of the Pyongyang General Hospital is nearing completion, and the capital has embarked on a housing building boom.

Additional projects like multiple small hydroelectric dams, large collective farms (such as the Jangchong Vegetable Farm), and various construction projects that can be found in most medium and large-sized towns, all point to a country that is not stationary.

Clearly, the misallocation of resources on things like nuclear weapons and future missile tests places a burden on economic growth. And the extremely poor state of the country's electrical grid, transportation system, and healthcare network means the country is in many ways still trying to fully recover from the downfall of the 1990s, but economic progress can nonetheless be seen.