History of the Musan Iron Mine

The Musan Iron Mine sits atop one of the largest iron deposits in northeast Asia and has been an integral part of North Korea's industrial base since the country's inception. Exact estimates vary but the open-pit mining complex holds at least 1.5 billion tons of economically viable ore (with total reserves estimated at around 7 billion tons). As such, interest in Musan goes back generations, with the first industrial-scale mining beginning in 1935 during the Japanese occupation.
Post-famine problems meeting production capacity have had ripple effects across North Korea's economy and its ability to carry out major construction projects. 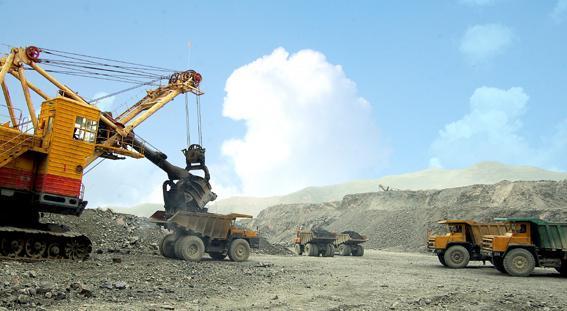 Operations at Musan mine. Image source: Wikimapia.
The mine has rarely operated at full capacity but did run relatively smoothly during the first few decades of North Korea's existence. Since the economic collapse of the 1990s and the country's subsequent inability to ensure constant electricity supplies and maintain or replace needed industrial equipment, operating capacity has bounced around from 60% to as low as 30%.
Pyongyang's COVID-19 mitigation measures have complicated the mine's operations and further limited income from iron ore trading. The long-term effects of these measures on both the mine and the economy as a whole have yet to be fully realized, but until North Korea can improve the mine's output or shift operations to another, more productive mine, the country will be seriously stunted in its ability to continue to engage in large-scale construction projects simultaneously like the Pyongyang General Hospital and Tanchon Hydroelectric Project.
Early history
As noted earlier, industrial mining operations began in 1935 by the Japanese company Mitsubishi Mining Co. The initial operating capacity for processing the ore concentrate was planned to be 500,000 metric tonnes annually. In 1942 that was increased to 1 million tonnes and an even larger plant was under construction in 1945.
From 1940-45, the mine was able to produce 3,838,454 tonnes of ore concentrate at an average iron concentration of 58% elemental iron. Obviously, Japan's loss in World War II and the subsequent division of the Korean Peninsula interrupted mine operations. 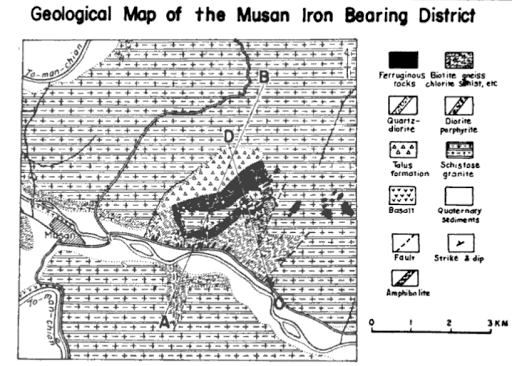 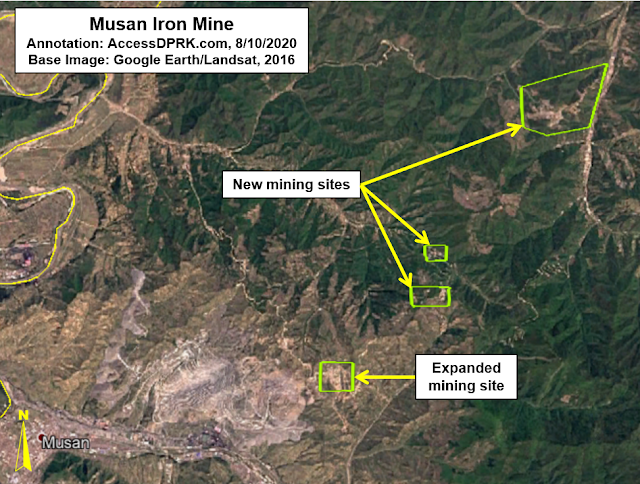 Lastly, while Musan lurches between higher levels of activity and near shutdowns, one thing that has remained constant is pollution from the mining, processing, and storage of the ore as well as from the general operational requirements of such a large mine.
River pollution from North Korea's mining, manufacturing, and electricity sectors has been a longstanding problem, and the Musan Iron Mine has been recognized as a major contributor of pollution along the Tumen watershed.
The water treatment systems along the 8.5 km stretch of the Songchon River that flows by the mine are largely inoperative. This river empties into the Tumen River (which serves as the Sino-DPRK border) and is a source of drinking water for both Musan and all of the Chinese and North Korean towns downriver. Lack of adequate pollution control has caused "significant environmental damage".
Notes:
1. This is only an approximation based on a nominal rate of $1 USD to 1.2 KPW won between 1961-1974. Source: http://oldsite.nautilus.org/DPRKBriefingBook/economy/DPRKMonetaryHistory.html
I would like to thank my current Patreon supporters: Amanda O., Anders O., GreatPoppo, Kbechs87, Planefag, Russ Johnson, and Travis Murdock.
--Jacob Bogle, 8/12/2020
JacobBogle.com
AccessDPRK.com
Facebook.com/accessdprk
Twitter.com/JacobBogle
Posted by Jacob Bogle at 3:56 PM