It is one of the three "pillars" of DPRK state security. The other two are the military and the Ministry of State Security.

One of their facilities, according to the 38 North Digital Atlas, is this complex on the western outskirts of Pyongyang. Its coordinates are 39° 3'10.50"N 125°40'14.21"E. Landsat/Copernicus imagery suggests this facility was built ca. 1989-1992 but the satellite resolution is low enough as to make a fully certain date range difficult.

In recent years, an underground complex has been constructed. Underground facilities (UGF) are not rare in North Korea, but this one consists of a "cut and cover" tunnel - not one that is excavated into a hill but where a trench is dug, the tunnel structure built, and then the site is covered over to hide it. Identifiable examples of cut and cover tunnels are indeed rare in the country.

The exact purpose of this tunnel/underground facility is a bit of a mystery, but considering its location, I feel that detailing its ongoing construction history is important. 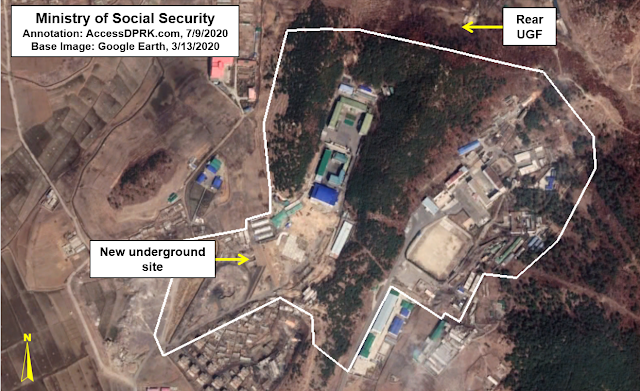 General outline of the complex.

The two sections of the complex are joined by a tunnel that runs beneath the central hill dividing the site. The tunnel is approximately 188 meters in length. 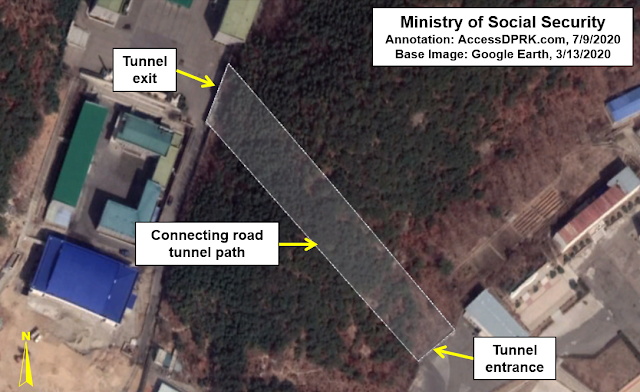 The tunnel allows vehicles quick access to each side of the complex without having to go around the hill. The facility has undergone many changes over the years, but this tunnel has existed since at least 2000.

At the very rear of the complex is another underground site. Whether or not it is directly connected to the Ministry complex isn't known but its proximity is interesting. 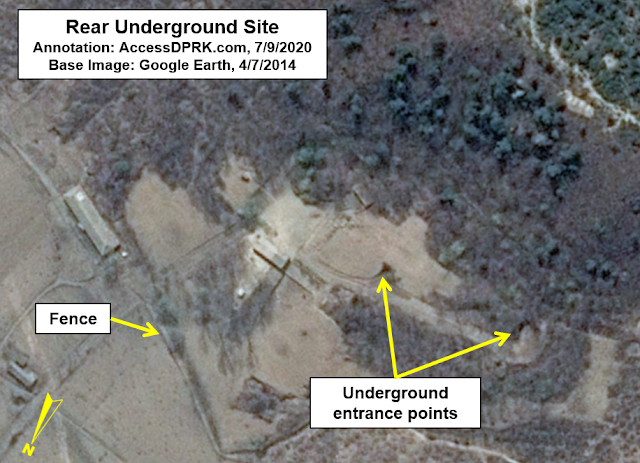 A trench has existed at the left-side facility since at least the year 2000 and implies that plans for this new underground structure have been around for a long time. 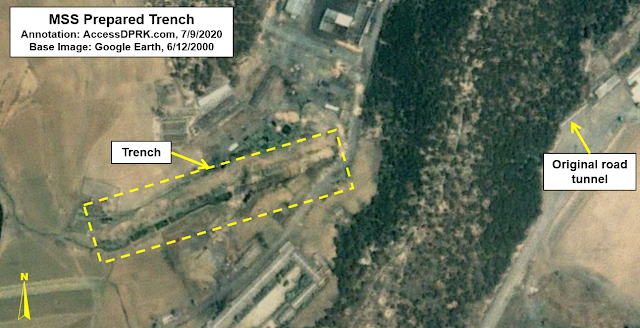 Little else changed at the site until 2013 when several temporary buildings were constructed near the trench, and minor work at the upper end of the trench can also be seen. (Clearer images of this work come from 2014.) 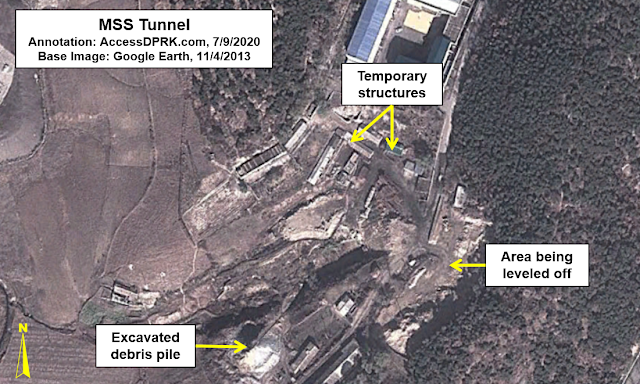 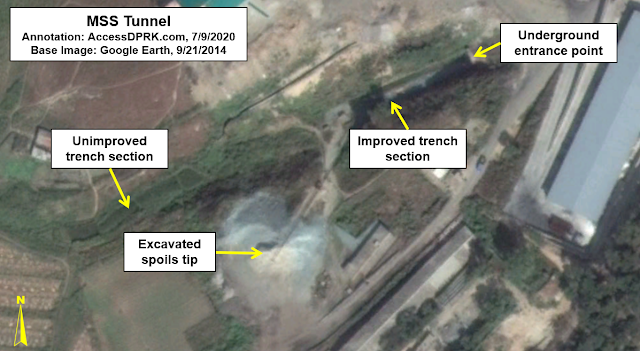 By September 2014, the upper portion of the tunnel is taking shape and a new building had been constructed at the site they were leveling off in 2013.

In 2014 other changes become visible including the addition of multiple permanent buildings (some were still under construction at this time). 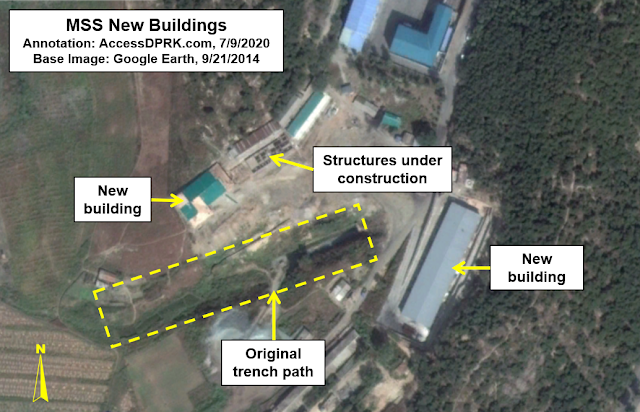 By this time, it's clear that a tunnel had been excavated, the sides of the trench had been shored up, and the debris pile shows activity. It isn't known if this tunnel goes into the central hill or connects to the road tunnel between the two sections, but if you draw a straight line following the new walls of the trench, it does intersect with the existing road tunnel. 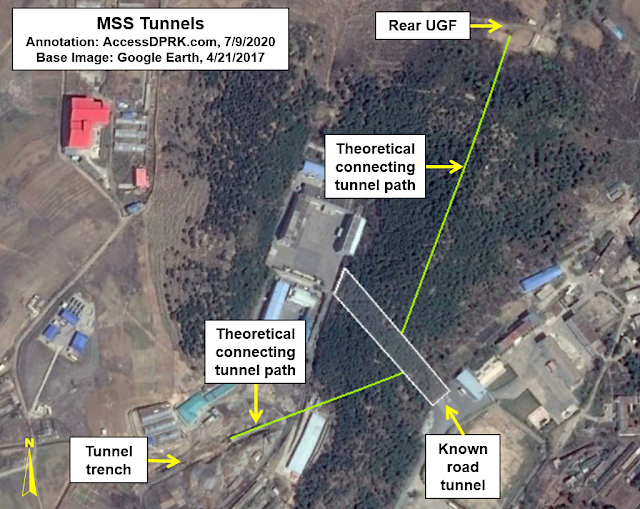 This at least theoretically gives the possibility that the entire central hill is actually a large underground facility that now has three points of access: the original road tunnel, the new tunnel under construction, and the older rear UGF. This part is merely speculation but the possibility of a large hidden facility is very interesting, as we know that numerous underground facilities exist in North Korea including some that are used in training security forces to hide their clandestine activities. 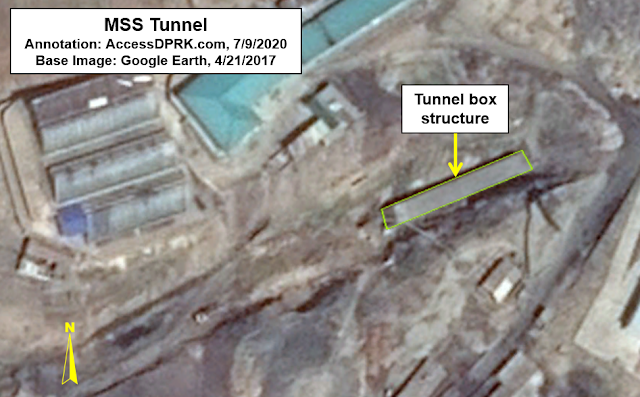 By April 2017, a concrete structure (or "box") can be seen inside the trench. At this stage, it is approximately 40 meters long and 5-6 meters wide. Additional work around the area to prepare for more construction has also taken place.

On the image dated October 26, 2017, it becomes clear that the concrete section from April was just one small part of a larger concrete tunnel structure that is now 155 meters long and about 10 meters wide. 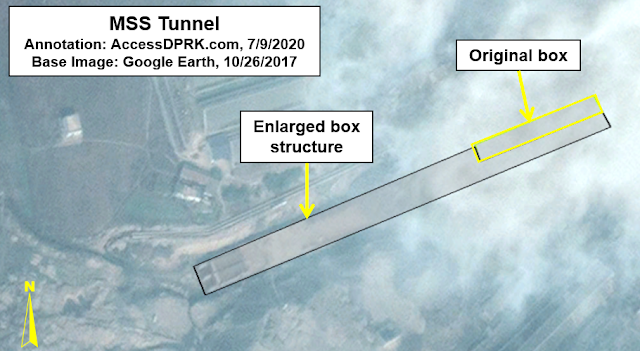 This type of structure is similar to long military "drive thru" bunkers that exist throughout the country (at least 400 exist at last count). One such example is this bunker, also in Pyongyang, that is similarly divided into two segments and is 10-12 meters wide. It is approximately 190 meters long. These structures are typically used to house and protect various vehicles.

However, these other drive thru bunkers are usually seen as part of military bases and never as part of building construction, making this Ministry structure unique as far as I am aware.

By April 2018, the tunnel had been covered and the area leveled off. The foundation of a new building had also been dug at the north end of the site. 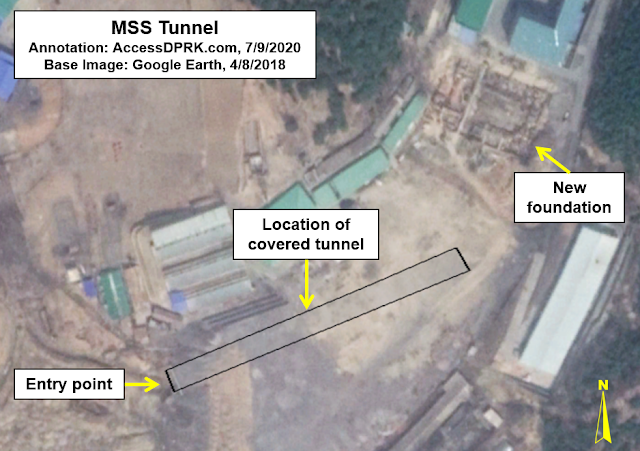 Fast forward to the end of 2019 and the new building has been completed and an entrance site to the tunnel was nearing completion (final touches, landscaping, etc.) By November, another foundation can be seen. The new foundation is in the middle of the construction site and sits on top of the tunnel.

Based on the most recent Google Earth image, there is vehicle traffic going in and out of the tunnel. The square foundation has also had some additional work. 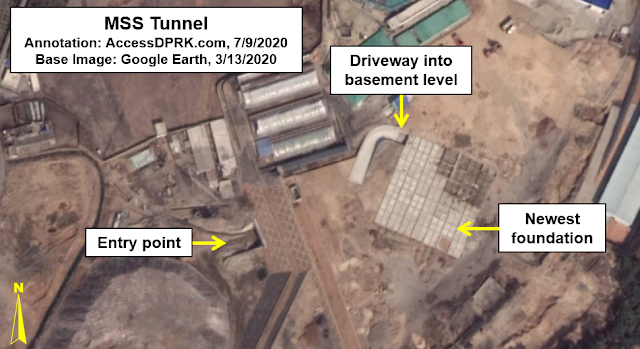 On the above March 13, 2020 image, you can see a driveway leading into the new foundation. The angle doesn't allow for this to be a second entrance into the main tunnel. The whole area has been raised above the tunnel, however, allowing for a low/shallow basement to exist at the new building site. This most likely where the driveway is going.

More recent satellite imagery (that I am not free to share publicly) shows that construction at the site is slow but ongoing. Unfortunately, it doesn't provide further clues to the site's purpose.

While not associated with this site at the Security Ministry, there is another underground construction that likewise began in 2017 and consists of a main tunnel structure. Its coordinates are 39°11'38.26"N 125°45'14.04"E, or 1.8 km north of the Kim Jong Il People's Security University in northern Pyongyang. The tunnel entrance is 12-13 meters wide and it has no apparent exit point. 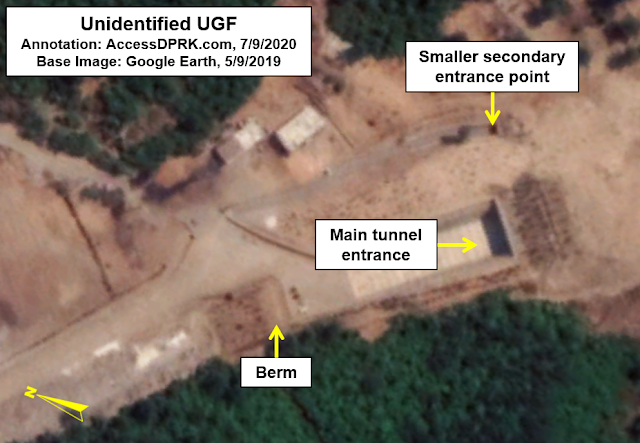