As anyone who has ever visited the country can attest, North Korea's electrical supply is limited and unreliable. Compared to its highly wired northern and southern neighbors, North Korea looks like a black hole, as this well-known NASA image shows. 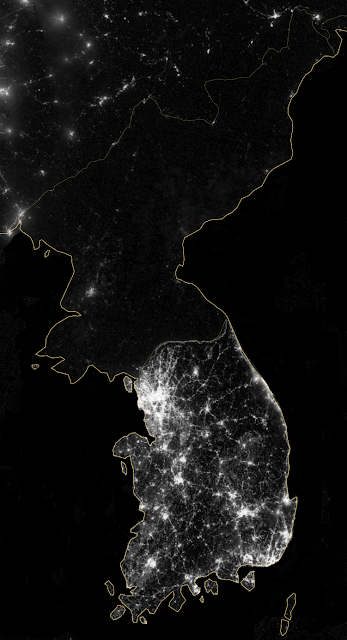 North Korea has several rivers and an abundance of coal that it can exploit for electricity generation, but a lack of equipment, spare parts, technical know-how, and an inefficient electric grid has meant that providing stable power to the country (or even the capital) has been a never ending problem for decades.

To try and address the electricity problem, North Korea has been trying to mine ever larger amounts of coal (since building entirely new coal plants appears to be beyond their current capabilities due to cost and sanctions), constructing new hydroelectric dams, and making attempts to fix inefficiencies within the system.

To help mitigate this problem, North Korea has begun to move away from building giant hydroelectric dams and is switching to building smaller dams that run along the course of a river as a set. Their combined electrical generating capacity can be large but without the constant problems the country has encountered while building larger dams. 38 North has published two articles disusing this trend. (Part I, Part II)

The country's energy portfolio does include wind power, but the current generating capacity is only enough to power a few thousand homes. However, experiments in wind continue, especially on the small scale of individual farms or small factories. I have noted that a site near Cholsan could be interpreted as the foundations for several large turbines but as of Feb. 2020, any additional construction has yet to occur. 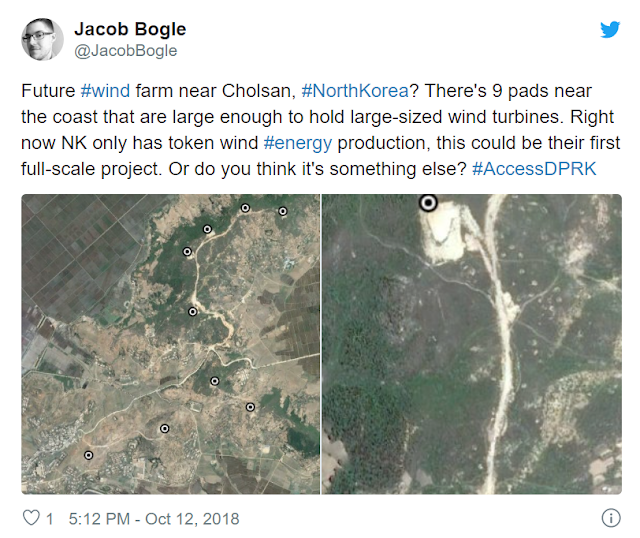 Finally, there's solar. North Korea only has a few "large" solar farms (by international standards, they're fairly small), but there are multiple reports that solar panels are being installed all around the country, mostly by individuals trying to power their home appliances. While many of these solar sites are too small to be seen via satellite, there are plenty of buildings with sets of solar panels that give evidence to the reports. 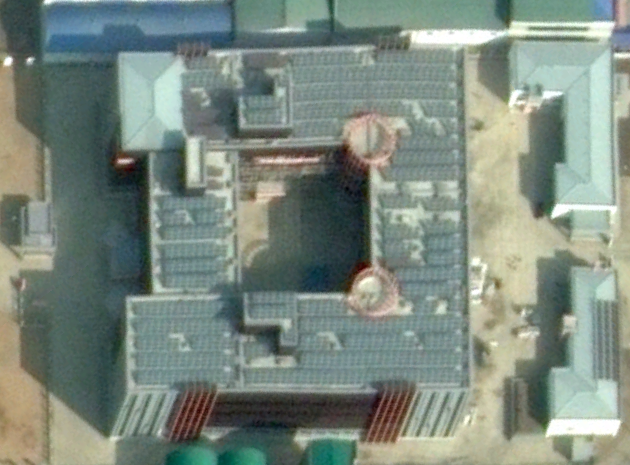 Obviously nuclear power could greatly help North Korea's problems. North Korea received a research reactor from the Soviet Union in 1963 and in 1979 it began to build its own indigenous reactor. The collapse of the Soviet Union and a lack of domestic nuclear fuel greatly hindered further research into nuclear energy production, but the country didn't give up. Pyongyang began construction on a 200 MWe reactor at Taechon; however, as part of the 1994 Agreed Framework, North Korea agreed to halt construction of that reactor in exchange for two 1000 MWe light-water reactors (which can't be used in weapon's programs). As so often happens, the deal fell through after several years and the final oil shipments and other associated programs as part the agreement ended in 2006.

Since then North Korea seems to be far more interested in developing weapons than building a peaceful nuclear energy capacity. Thus, the country must continue to rely on outdated coal plants and try to squeeze every kilowatt of power out any available river. One can hope that they will continue to develop wind and solar energy.

According to most sources, North Korea's energy production breaks down to 76% from hydroelectricity and 24% from coal. However, as noted, there has been real investment (both private and state) into wind and solar. I think it is possible that up to 5% of North Korea's energy portfolio now comes from these two sources, as many homes produce and use electricity that isn't connected to the official grid and can't be methodically measured through standard means. 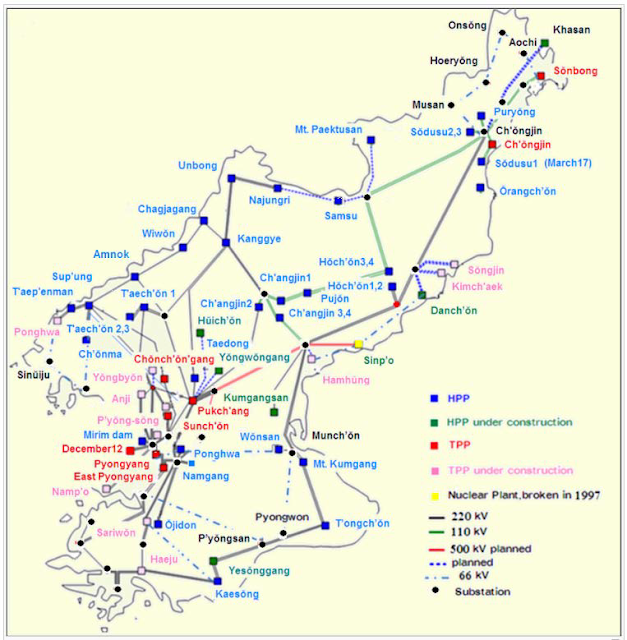 Based on #AccessDPRK mapping for Phase III, North Korea has eleven coal and oil-fueled thermal electric generating plants. Of those, one is inactive and another is under construction (which has been stalled since 2014). There are at least 475 hydroelectric generating stations and associated dams (the dams and generators can sometimes be miles apart, but both are counted as they are part of the overall hydroelectric system). Many of these sites only run during periods of high water or seasonally for irrigation purposes, while lying inactive the rest of the year. Many of the smallest sites (that produce only a few kilowatts) might actually be completely inactive due to flood damage over the years. It's impossible to tell via satellite for each and every site.

Those sources of energy, along with the new solar and wind locations, distribute their electricity through a network of at least 1,322 electrical substations.

The following set of images show the locations of the country's fossil fuel power plants, its hydroelectric plants, main wind and solar farms, and all of the substations. 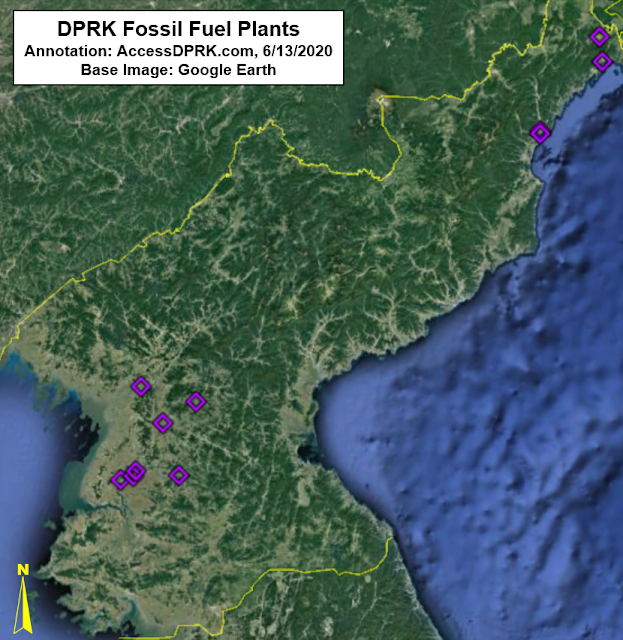 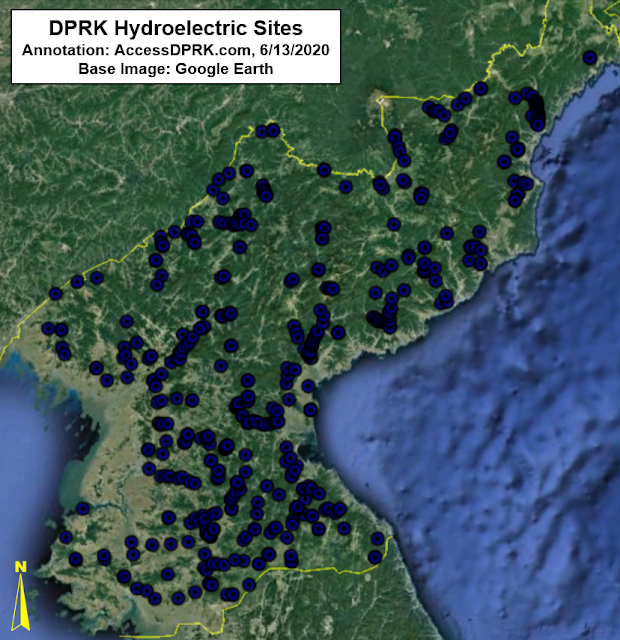 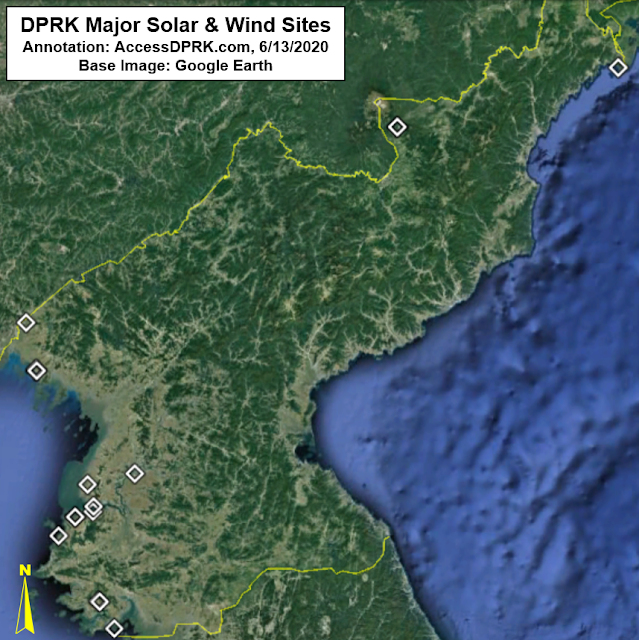 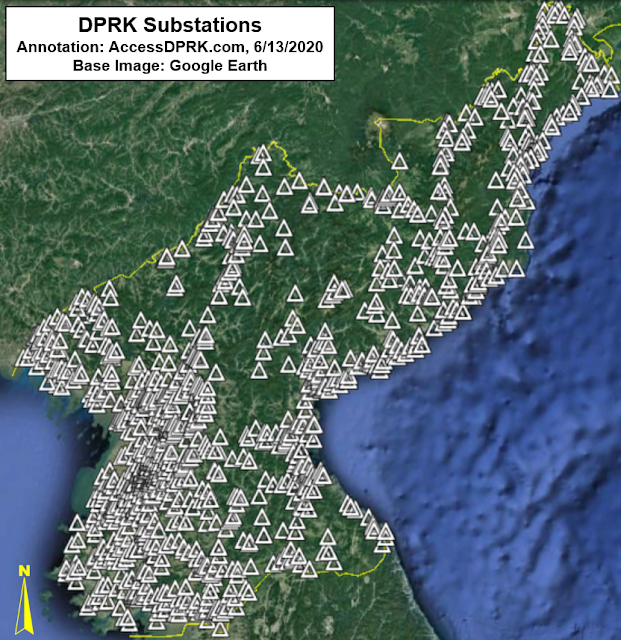 The country continues to try to improve its energy production through all means available. A kilometer-long solar farm was constructed in Sinuiju in 2019 and the country is in the middle of finishing up construction of its largest hydroelectric project that's currently underway. The Samsu-Sinhung hydroelectric station (also called Tanchon) will rely on a 60 km tunnel to deliver water from the Samsu reservoir in Ryanggang Province to a generating station in Sinhung, S. Hamgyong Province.

Additionally, they have been taking steps to decrease the energy demand on the main grid by installing solar panels at most cell phone towers. With the country's 1,150 or so cell towers, this step alone contributes anywhere from 1 to 3 megawatt hours of power to the system during peak hours. (Cell tower energy production levels depends on several variables which aren't easily discoverable with North Korea.)

Powering North Korea relies on a complex network of generating sites, distribution points, and other infrastructure that is often many decades old. Inefficiencies within the system continue to pose a major obstacle to achieving energy sufficiency as upwards of 30% of electricity is lost through transmission and distribution by the time you get to rural areas, with a 2014 national loss average of 16% - five times the loss rate of South Korea.

Reviving the entire system would cost billions the country doesn't have. In the meantime, the regime seems to be dealing with this perennial problem by investing more in hydroelectricity to ensure energy levels are sufficient to meet core industrial and agricultural needs, and has been letting individual families fend for themselves by buying solar panels, solar water heaters, and installing micro-wind turbines on their homes and apartments. This approach will not solve the energy problem, but it does give the state some extra options until more systemic and economical solutions are discovered.


Patreon Special Access
Patreon supporters at the $20 tier are entitled to exclusive data sets. The Google Earth file for this post is one of those exclusive offers. The file contains every identified thermal power plant, hydroelectric dam, wind turbine, every major solar site, the country's network of electrical substations, and dozens of examples of small-scale solar installations. In all, it has over 1,800 places marked and with additional information where available. Please consider supporting the #AccessDPRK Project on Patreon and get access to this and other exclusive information.