Here's what happened with #AccessDPRK in 2018.

For every large article or big mapping project, I try to mix in several smaller ones to continue to the goal of exposing North Korea and keeping my readers interested. This year was no different, however, I made the choice to focus more on those bigger items.
In 2018 I made eleven posts to this blog (making for 70 posts overall). Three of those this year included either a release of information via Google Earth files or an explorable Google Map. And when you make room for the various images included, these eleven posts represent 85 pages of printable material.

The two largest projects I began this year involves the military and the country's monuments.
The military project can be divided into two smaller protects (yet still large in themselves). The first is a complete re-mapping of North Korea's military sites and re-organizing of my file system within Google Earth. I am wanting to take a much more granular look at them to provide ever greater levels of detail. While this project will take some time to complete, I have already made over 500 additions to what was included in the Phase II map, and made hundreds of additional changes to the original material as well.
The second part of the "military project" involves the country's air defense sites. The current, non-public map that I now have has even more locations identified and updates those older ones that may have become decommissioned, upgraded, or otherwise changed since 2016/2017. Without giving too much away, I am working on a new map specifically for this subject and it will help to give greater-detailed answers to certain questions that are out there.

The second major project is also re-mapping the whole country, this time, in regard to the vast numbers of monuments. I have also broken them down into a few specific categories that will be of use to others. One reason I decided to do this is to help resolve a discrepancy between my own findings and the often quoted estimations by others on the number of monuments around the country. It will also give a general idea as to how many new monuments Kim Jong Un has constructed, and offer insights into the amount of effort and money still being dumped in the personality cult at the expense of other sectors.
I have completed the mapping portion. Now all I have left to do is write my report on it and publish the KML file, so that will definitely become available in 2019.

In terms of social media, it's been a fun year. Traffic to the blog for 2018 was over 600% higher than the first year of having it. I made over 80 Tweets about North Korea that was connected to #AccessDPRK and those garnered over 200,000 impressions.

Here was 2018's top Tweet. It caught the attention of some international tabloids, and while sensational headlines isn't what I'm after, it did help direct people to the blog where they can get a more sober look at what's going on in the country. 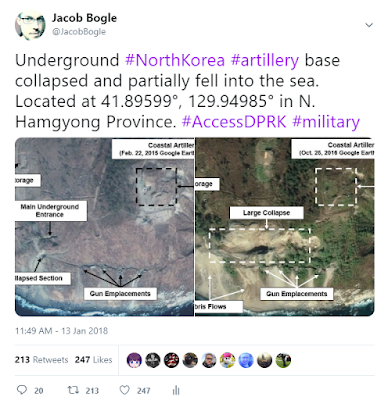 I'm also proud to say that a GIS company reached out to me for some assistance with one of their projects earlier in the year, and I was able to help out. Additionally, I discovered that the RAND Corporation used parts of the Phase II map to help create their 2018 report, The Korean Peninsula: Three Dangerous Scenarios. It's always exciting to me when I see things being by use others (when proper credit is given, of course, which it was by RAND).

I have still been considering setting up a Patreon page, as I first discussed last year. Well, I've already set it up (not published) but I haven't quite figured out what direction I want to go with it (either to allow people to donate monthly or per article. What kind of rewards to offer, etc.) But considering the amount of time some of these things take (over 150 hours just on monuments), I don't think it's the right way to go to shoulder the full burden of research, buying new books/articles, up-keeping domains, etc. without some support from those most interested. Life does get the way at times, and having some added income would help speed things up and allow me to produce more content.

Here's looking forward to another year of shedding light on the Hermit Kingdom!