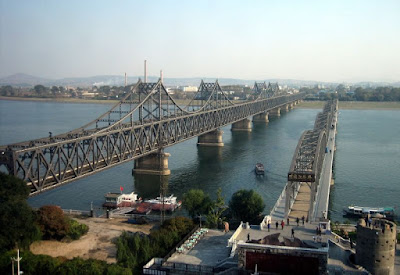 The number of border crossings a country has and changes to them allow analysts to better understand things like relations between countries and anticipated future trade and travel. For North Korea, observing what happens along their border with China (and even their tiny border with Russia) provides an out-sized insight into the workings and intentions of the regime.

The #AccessDPRK project identified 27 current and former border crossings (some could easily be reconnected). Several DPRK-China crossings have been expanded lately and those will be the focus of this post. An exploreable Google Map is located at the bottom of the article showing all the of the border crossings.

As always, click on an image to see a larger view. 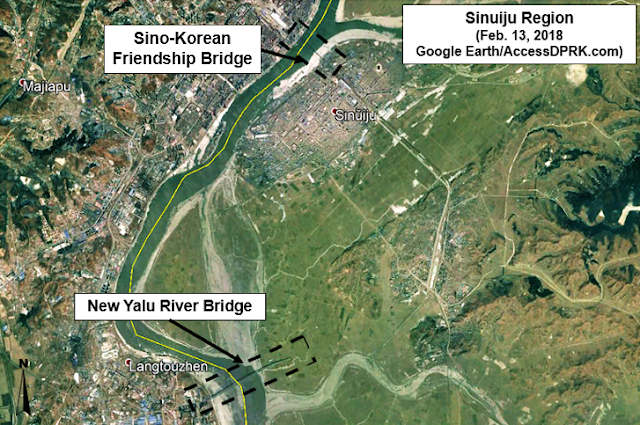 North Korea's key border crossing is the Sino-Korean Friendship Bridge that connects the North Korean city of Sinuiju and the Chinese city of Dandong which lies across the Yalu River. It was constructed by the Japanese (under a different name) during World War II and carries roughly 45% of all trade between the two countries. 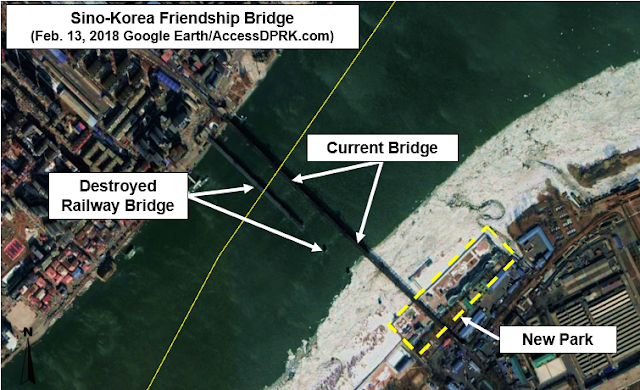 In 2011 construction started on the New Yalu River Bridge, 8.3 km downriver from the old bridge. The bridge was supposed to cost $350 million and have opened in 2014, however, the bridge is still not completed and ends in an empty field on the North Korean side. The bridge was supposed to link a special economic zone (SEZ), which would enable thousands more vehicles to cross each week, but the SEZ has yet to be realized.

In 2015 a new park area (that includes a water park) was constructed by the old bridge.
Additional plans (on top of multiple others going back many years) for Sinuiju have been placed forward by Kim Jong Un, which would see scores of new apartment blocks constructed, new factories, and recreational sites as well. Kim's stated goal is to turn the city into a "gateway city" and would have the plan completed in 5 years. 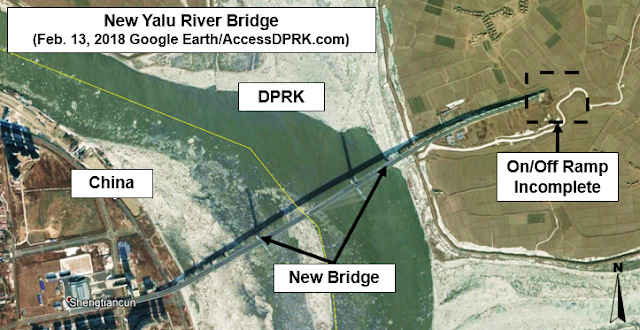 Between 2008 and 2013, the border crossing here was expanded. After a major 2016 flood, the site was repaired and the city also experienced large-scale changes (in part to help facilitate the growth of the personality cult surrounding Kim Jong Suk, the grandmother of Kim Jong Un). 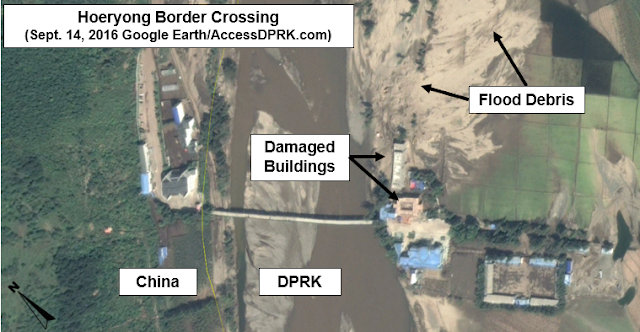 This side-by-side comparison shows the substantial enlargement of the administration and customs buildings on the North Korean side between 2008 and 2018. The crossing bridge itself hasn't changed, but now the country has greater control over what crosses (for combating smugglers) and makes more efficient use of the site.

Twenty-seven kilometers up river from Hoeryong, is the small town of Sambong. The border crossing there has always been small, and it remains small, but there have been some expansion of facilities. This gives evidence to the importance the regime has placed on cracking down on smuggling, illegal crossings, and being able to catch all of the revenue the state is owed. 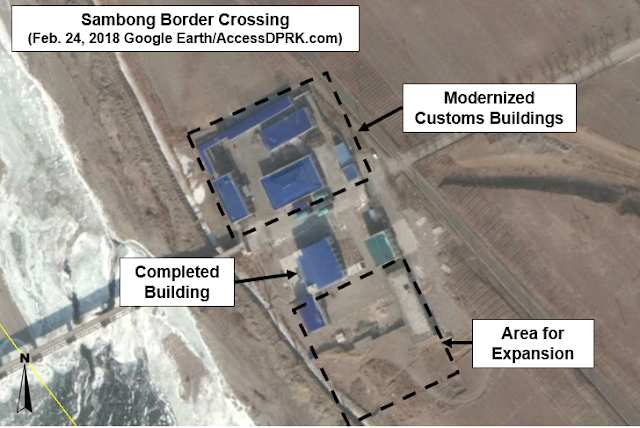 As with Hoeryong, Namyang has been experiencing major changes throughout the city. New housing, new schools, and an enlarged border crossing connecting Namyang to the much larger Chinese city of Tumen.

Roughly 57% of Tumen's population of 136,000 are of Korean descent. This makes the city a natural trading post, and so the growth of Namyang has become more important as trade with China has continued to heat up (despite sanctions) for many years. Control over the area is also important as most North Korea defections happen along areas with China where there is a strong ethnic Korean population.

The original road bridge was only wide enough to carry one-way traffic. The new bridge looks to be able to carry two lanes of two-way traffic, greatly enhancing commerce in the region. 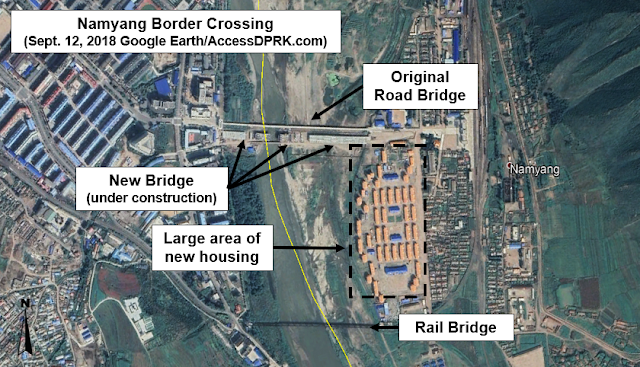 Located in the special economic zone of Rason (Rajin), the slow expansion of the Wonchong border crossing has been underway for over a decade, but the final push to completion has happened in the past three years. The crossing expansion is part of a larger process of strengthening infrastructure ties from Rason to both China and Russia, including highways and port facilities. The new bridge allows for two lanes of two-way traffic, whereas the original crossing was only wide enough for vehicles to come through single file.

Under the Trump Administration, China has taken an intermittently harder line to enforcing UN sanctions, where it had been a notorious weak spot. Regardless, limited legal trade keeps growing and illicit trade (specifically among private and local actors) remains a much-needed lifeline for North Korea. Kim Jong Un's continued placement of importance on these border crossings shows his intentions to keep trade going and, perhaps, his hopes that sanctions will be lifted and so the country better have the infrastructure to deal with the volume when the floodgates open.


This Google Map shows all of the different active and former border crossings with China, Russia, and South Korea.