Each year North Korea sounds the alarm on its food supply. Droughts, floods, bad harvests, sanctions, there's always some reason used to appeal for food aid. However, various reports for 2018-2019 show that recently they have indeed had lower than average cereal production, and childhood malnutrition has been ongoing for over a generation. The typical western response is to send limited aid, followed by the admonition to stop wasting billions on nukes and luxury goods and then maybe the regime could feed its people.

Despite military spending and market crackdowns, the government doesn't seem entirely blind to the need. In 2018 Kim Jong Un visited sites around Kyongsong County in North Hamgyong Province and declared that the air force regiment at Jungphyong-ri (aka, Kyongsong-Chuul) was to be removed. In its place, a large-scale vegetable greenhouse facility was to be built. Kim's orders are being carried out at "lightning speed". The northern provinces routinely face food shortages, so as long as the food grown here isn't redirected to Pyongyang or into the hands of the military, it should help alleviate some of the local problem.

Kyongsong-Chuul had been part of the Sixth Transport Division and included an officers training school (which lies slightly to the north).

Satellite imagery from October 2018 clearly showed a massive amount of work happening at the airbase. However, Jungphyong-ri technically lies about 8 km north, and there is another base 6 km to the north of the village, so I wasn't 100% certain what going on at Kyongsong-Chuul.

The most recent freely available imagery is from May 2, 2019 and it leaves no doubt that this is the airbase in question and that the farm's construction is well underway.

I was able to count 198 foundations for greenhouses. There is apparent room for at least 39 more.
The area covered by this new agricultural center covers approx. 203 hectares (501 acres). This figure excludes the space occupied by the temporary worker's housing, which will be torn down once construction is completed. 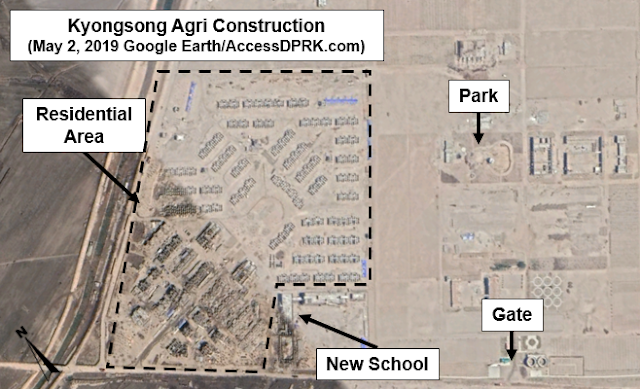 I counted 54 apartment blocks under construction with a new school in the lower right-hand corner of the district. 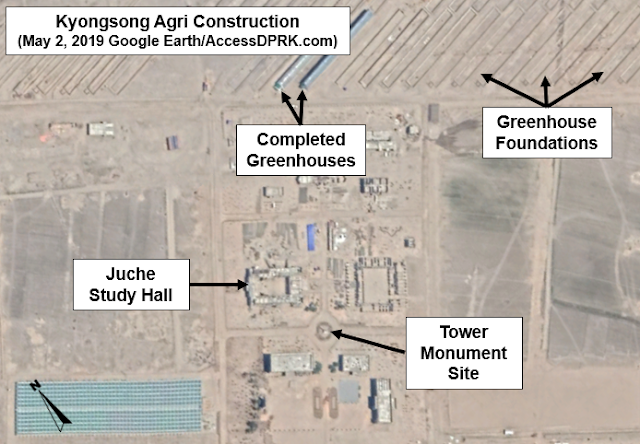 Only two greenhouses have been finished by the time of this image. In the administration quarter, the required Juche Study Hall is under construction and there's a spot for the Tower of Immortality monument as well. 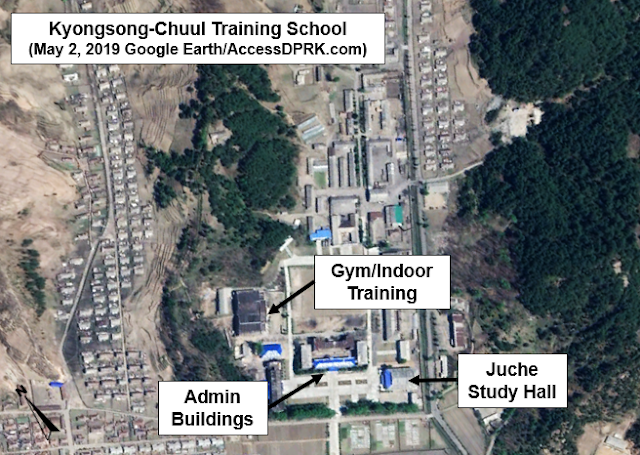 It is unclear what will become of the training school. There hasn't yet been any construction (or deconstruction) of the facility.

I have written a lot over the years about North Korea's military activities, especially the growth and modernization of their bases. It seems that this time they have finally turned swords (or at least a runway) into plowshares.