On New Year's Eve, following the Sixth Enlarged Plenary Meeting of the Party's 8th Central Committee, Kim Jong Un laid out his plan to "exponentially increase" the number of nuclear warheads North Korea has. Current estimates are that North Korea has enough fissile material for up to 55 warheads, has assembled ~20 weapons, and has a production capacity of one bomb every two months.

Publicly announced plans are rarely made prior to any foundation work being done. Whether its massive new farms, high-rises in Pyongyang or new weapons, by the time an announcement is made the plans are often already in the process of being carried out.

To dramatically increase the number of warheads, the country would need to ramp up uranium and plutonium production. On the uranium front, the Pyongsan Uranium Concentration Plant is North Korea's primary facility for the production of yellowcake uranium (80% uranium oxide). From there it is sent to the Yongbyon Nuclear Scientific Research Center for enrichment to weapons-grade uranium. The number of centrifuges at Yongbyon is a major bottleneck in their ability to increase the manufacturing rate of warheads, but there are signs that North Korea has been trying to resolve this as well. 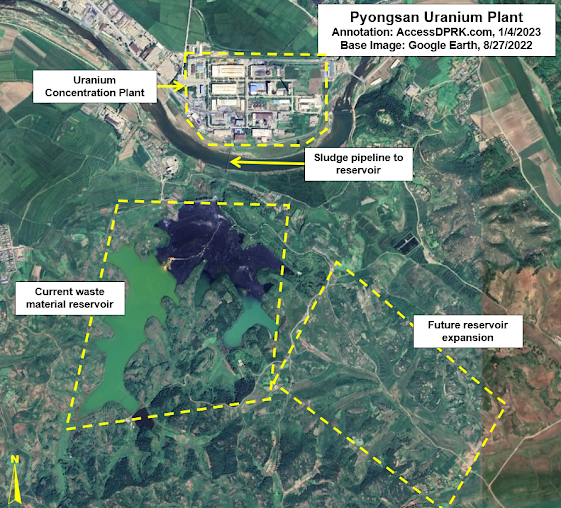 At Pyongsan, the waste material from the plant is sent to a reservoir about 300 meters away, across the Namch'on River. I have written about the deficiencies of this reservoir and the risk of river pollution from the complex, but it seems like North Korea has been planning for its continued use through ongoing uranium production for some time.

Depending on the exact height of the dam, the current reservoir has 35 hectares (86 acres) of usable space. In 2006, the visible area of precipitated waste sediment was roughly two hectares (4.9 acres). That had increased to 6.1 hectares (15 acres) by 2017.

There is some variability in what can be seen and measured due to seasonally changing water levels within the reservoir, but the area of visible waste now covers at least 13.2 hectares (32.6 acres); however, the solid pile has nearly reached the same level as the top of the embankment dam and has blocked off one of the reservoir's main lobes, limiting the reservoir's lifespan and risking flooding/overtopping events each time there's heavy rain fall. 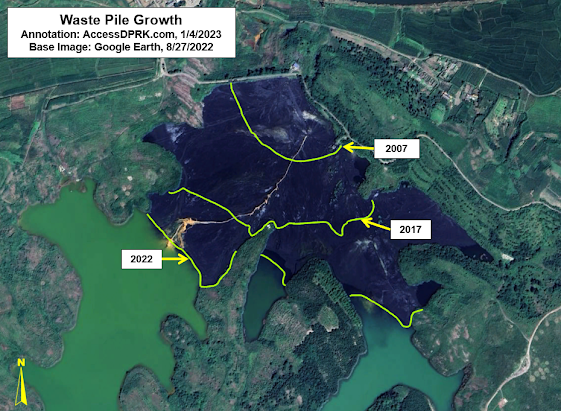 If Kim Jong Un is serious about adding dozens or hundreds of new warheads to his arsenal within the next decade or so, Pyongsan is going to need more space to hold its toxic waste, and it looks like that is exactly what's happening now.

Google Earth now shows a reservoir expansion that's in the early days of construction. The current reservoir sits within a series of low hills and shallow valleys. The valley immediately east of the reservoir is being prepared to serve as a future storage site.

In early 2022, a mere 120 meters away, a trench was constructed leading from the current reservoir into the new valley. And at the end of the valley, nearly a kilometer away, the foundations for a new dam were being excavated. 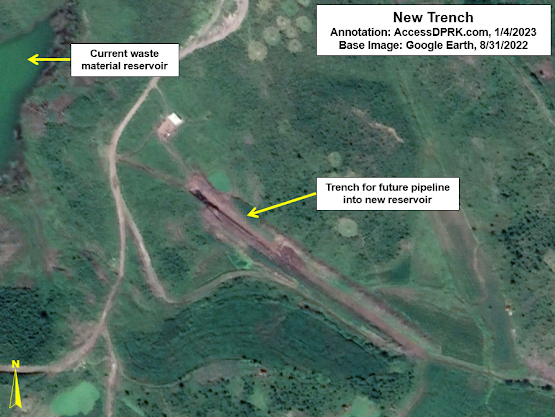 This 175-meter-long trench will carry a pipe from the old reservoir and into the valley along the path of a small stream, allowing it to fill using gravity. 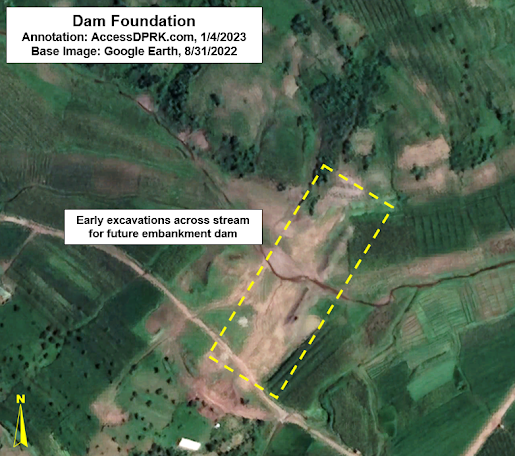 Nearly a kilometer southeast of the trench, this future dam will block the valley to create the reservoir. It will be around 165 meters in length.

Depending on the finished height of the dam (as constrained by the abutting hills), the usable size for this new waste reservoir could be between 16 and 19 hectares (39-47 acres). The current reservoir was constructed in 1990, but activity at Pyongsan has historically not been constant, with several periods of little-to-no production. But if the last ten or so years of production levels are any guide, this new reservoir could hold another 15-20 years' worth of waste material on top of what can still be added to the existing reservoir, which could still be operational for the next ten years depending on the depth of its western lobe.

Since the current reservoir still has life, there may not be a need to rush the construction of this new site. But the fact it has been planned and initial work carried out speaks to the long-term plans of Kim Jong Un, and that is to keep uranium production going for as long as possible.

One thing that I will be interested in watching for is whether or not the new reservoir will be lined with protective sheets (the current reservoir isn't) or if any mitigation efforts will be undertaken to prevent leaks into the ground water and into the larger Ryesong River which is just 2 km away and flows toward South Korea.

All of this is happening as 2022 became a record year for the number of missile tests carried out, far surpassing any other. And it is happening following announcements in 2021 surrounding the development of tactical nuclear warheads, hypersonic glid vehicles, and continued work on submarine launched ballistic missiles. Kim Jong Un has made it very clear he wants to develop a dizzying array of new weapon systems, and the expansion of this reservoir is a practical infrastructure step toward enabling North Korea to engage in the types of industrial activity needed to eventually produce them in the long-term.