Kim Jong Un may love his nuclear weapons and hasn't shown any intention of closing down North Korea's concentration camp system, but he has been a "builder leader". The country's generation of market activity has meant a new middle class, new expectations, and the money to accomplish them (at least superficially).

Kim has overseen the construction of new ski resorts, expanded airports, and new water parks. He has infused Pyongyang's zoo and museums with additional resources, constructed countless apartments, and now has embarked on the construction of further parks for the amusement of his people. I suppose the thinking goes, if they're distracted by games, they won't call for his head.

Starting in 2017, major cities have had small "town square" parks (as I call them) being constructed.
I can only speculate as to the exact nature of these new parks as I haven't seen any pictures of them from the ground, but they all follow the same basic design and have enough space for gaming stalls and a few small shops. What makes me call them town squares is their resemblance to known urban warfare training centers in the country, which aim to create realistic looking urban areas to train soldiers for fighting in cities. Using Google Earth, I have been able to locate 15 32 56 of these parks.

As more imagery has been updated, it looks like at least every county seat will have one of these parks built. Interestingly, I haven't located any in the Pyongyang metropolitan area.

Here is a completed park in Toksong, South Hamgyong Province. (Click on images for a larger view) 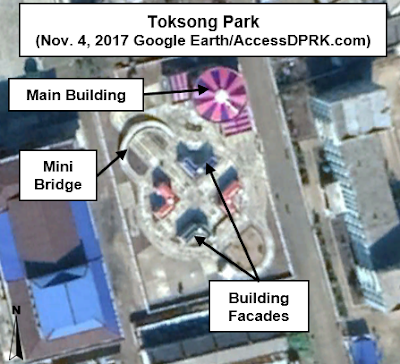 As of August 2018, the park in Kimchaek, North Hamgyong is still under construction. 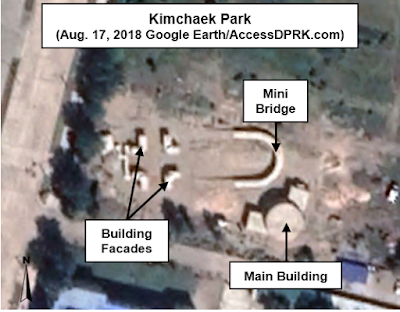 In Unryul, South Hwanghae, the "town" is part of a larger park area. 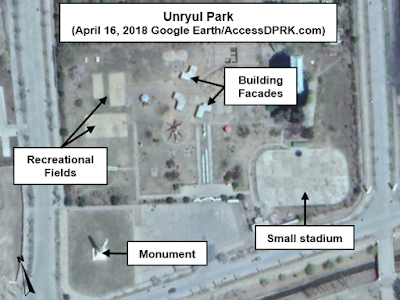 All of the parks I have located can be explored here.


Such parks aren't without precedent. Folk villages, such as in Sariwon, are common in both North and South Korea. And individual buildings (like restaurants) or even whole sectors of a town that are constructed in traditional styles can be found in multiple places. Perhaps these more modern looking buildings are in tribute to the Kim Jong Un architectural 'revolution'.