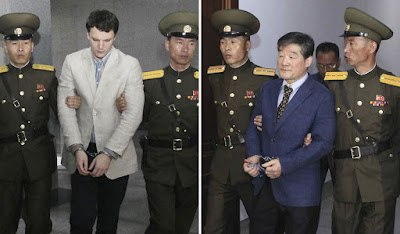 Otto Warmbier (left) and Kim Dong Chul (right), both are Americans who have been detained.
Image source: Washington Times.

Since 1999 there have been 16 US citizens detained by North Korea. Of those, 9 have been Korean-Americans, and all but one have been detained since 2009 - the same year the Six-Party Talks broke down. At least three were Christian missionaries and a further two were associated with Pyongyang University of Science and Technology (PUST), which was founded by evangelical Christians. The most recent detainees are Kim Sang-duk (arrested on April 21, 2017) and Kim Hak-song (arrested on May 7, 2017). Their arrests mean that there were four Americans being held in North Korea at the same time (until June 13, 2017). The other two are Otto Warmbier (released on June 13, 2017) and Kim Dong Chul. This is the second time that there have been four detained Americans at once.

In a minority of cases, those arrested committed what would be considered an actual crime by the rest of the world. One such case is that of Otto Warmbier, who tried to steal a propaganda sign. However, I doubt many would think his 15-year prison sentence is acceptable. In most cases, there doesn't seem to have been any internationally acknowledged crimes that were committed.

Since the United States doesn't have diplomatic relations with North Korea, American's can't travel there directly and so must go through either China or another country first. And because the US State Department doesn't have the ability to track who visits the DPRK, there are no firm numbers on how many Americans make the expensive trip to the "Hermit Kingdom". It is estimated that 3,000-4,000 Westerners visit each year and that a few hundred of those are Americans. This makes a person's overall risk of being arrested fairly low, but it's definitely is a risk.

It's important to note that Americans aren't the only nationality to be targeted, but outside of the kidnappings of South Koreans and Japanese over the decades, Americans make up the bulk of persons being detained post-1953. Outside of legitimate crimes, the reasoning behind North Korea's actions isn't exactly known. Having high-ranking American officials (current and former) involved in the release of detainees helps to confer some level of legitimacy on the North Korean regime. The actions can also be seen as a "safe" way to exercise some manner of strength against the United States, and it provides a domestic propaganda win - "our country is strong and we won't let the imperialist Americans harm our 'supreme dignity' ".

For those who do end up behind bars, the experience is nightmarish. In May, Pyongyang said it had a right to "ruthlessly punish" the Americans it detains, and stories of hard labor, malnourishment, beatings, and lack of proper healthcare are common to many who have been behind bars. However, their treatment doesn't appear to be as bad as those sent to "total control" camps within North Korea's expansive gulag system. It's logical to conclude that keeping Americans alive is more beneficial to the regime than the lives of thousands of North Koreans the government allows to languish to death each year.

Here's some additional information about the history of US citizens who have been held by North Korea.