My "real life" has kept me relatively busy over the last few months so I've fallen a bit behind on the goals I set. However, I have marked over 5,500 locations (with over 1,000 military sites) and I am halfway finished with North Pyongan Province. As of today, I have fully mapped over 10,000 square miles and partially mapped a good portion of the rest of North Korea's 46,541 square miles. I've also decided to create a new file (for the whole country) which will mark the nation's extensive irrigation system - which consists of over 6,000 dams, pumping stations and other irrigation structures.

Once I've completed my own primary mapping project (excluding the irrigation file), I'm also going to integrate what I've done with the published works of two others to create a "master file" which should make available the whole of North Korea with no overlaps and very few, if any, holes. As time permits, I will also release additional files that will give you the locations of any other items I find interesting or that deal with national infrastructure (like town signs, rural schools, etc.). 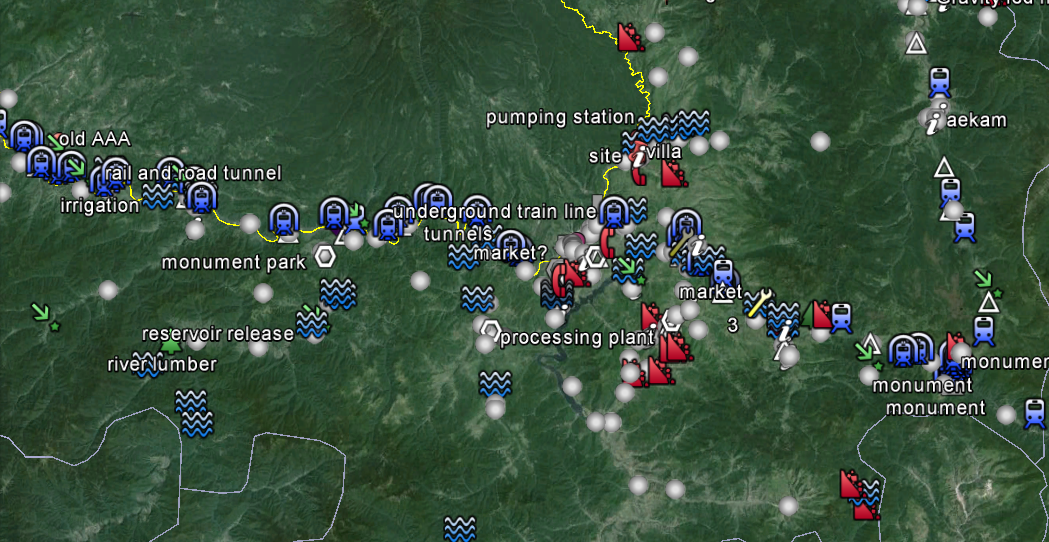 Some of Ryanggang's place marks. Click for larger view.

In 2013, vast amounts of Ryanggang Province were covered by low resolution satellite imagery, however, much of that has now been updated to high res. This means that there's a lot of the Province I need to go over (once again) and map, since objects in the low res. areas were nearly impossible to interpret. The Province has a low population density so I'm hoping I can finish it and release the updated KMZ file for it relatively soon.

Until then, my next blog post will be about the incredible untouched wilderness areas of North Korea. So be sure to stay tuned!