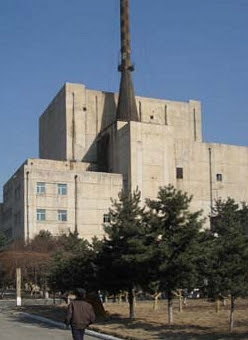 
Yongbyon (named for the ancient nearby walled city) was constructed from 1961-1964 with Soviet assistance. It took on the style of a Cold War-era "closed city" and is cut off from the rest of the country. It lies within a secured compound covering 24.8 sq. km and is protected by 22 primary checkpoints and internal gates. It is further defended by an array of nearly 40 anti-aircraft artillery batteries which encircle the region. Over the decades North Korea, along with its foreign benefactors, has spent billions constructing the site. Based on inflation, the initial start-up costs of Yongbyon was over $4 billion (or $500 million in 1962 dollars). 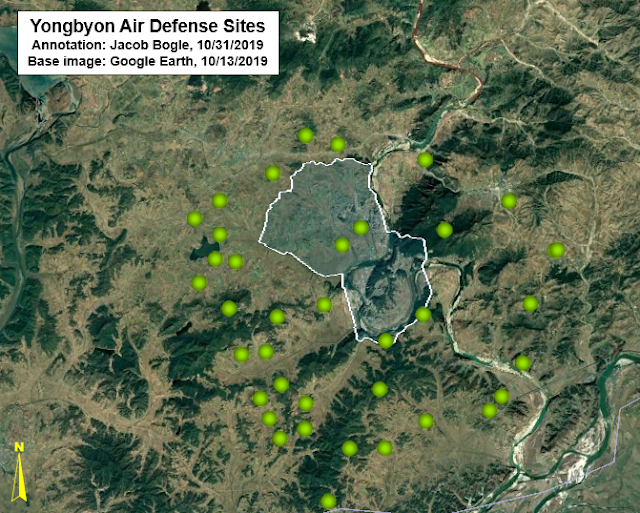 While Yongbyon is contained within a defined security perimeter, it is divided internally into two main sectors: the civilian, residential area (also known as Bungang-ri) and, to the east, the nuclear facilities themselves which form an axis of distinct research and production complexes centered along the Kuryong River that flows through the area.

Over the years, Yongbyon has grown substantially. New housing, new reactors, and new laboratories keep popping up. Even when the reactors enter stages of relative inactivity, the surrounding site continues to expand. The unofficial nuclear truce between North Korea, the United States, and South Korea that the country's leaders have tried to create in recent years hasn't done much to halt the growth of Yongbyon. 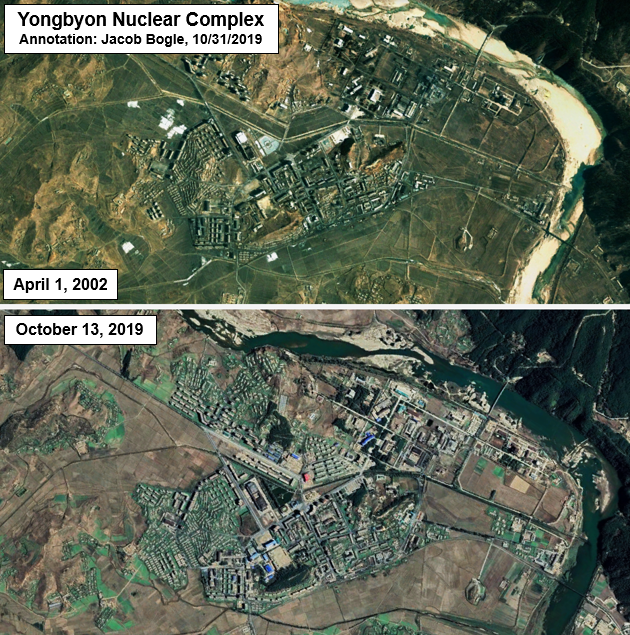 Until recently, the "newest" Google Earth imagery of the area was from 2016. Reporting by groups like 38 North have noted the occasional new building being constructed over time as they have focused on specific parts of Yongbyon and purchased newer commercial images for that reporting.

Recently, however, Google Earth updated their imagery for the entire area. Dated October 13, 2019, we can now immediately observe three year's worth of changes over miles and miles of territory in and around the nuclear site. It also gives us a chance to observe changes missed by other reporting or totally ignored (such as the residential area). 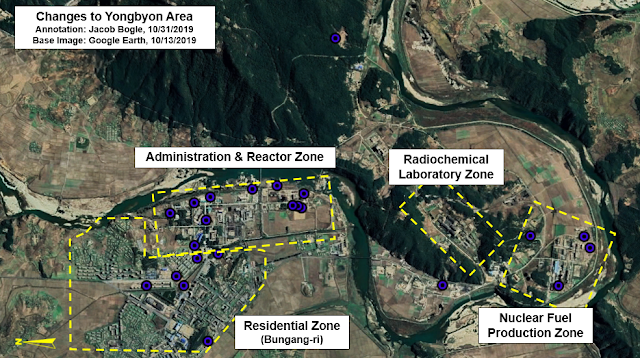 After looking over the closed-city, I was able to note 23 changes in the form of new construction or buildings being repaired/renovated.
You'll note that most of the changes occurred within the residential zone and inside the administration/reactor zone (where the 5 MWe and 50 MWe reactors are located).

I'll start with changes to the residential zone (Bungang-ri).

The two main changes in this area shown is that several new apartment blocks are under construction and the road has been widened. Apartments were also built in 2016. Access to Yongbyon is severely restricted and you must have the necessary permits to live there (and must receive permission to leave). This means that any large population growth is purposeful and comes from the government bringing in new scientists, engineers, and their families.

Concerns have been raised over the years about the health and well-being of the thousands of people that live here and work at all of the various facilities. While residents receive better food rations, greater opportunities for their general advancement in life and the advancement of their children, the area is reportedly heavily polluted. In 2019, a former resident of Bungang-ri told DailyNK that,


"In other districts it is very difficult to find people with cleft lip but here there are many individuals with crooked mouths, those lacking eyebrows, incidents of dwarfism, and those with six fingers. There are even children who just look like bare bones." 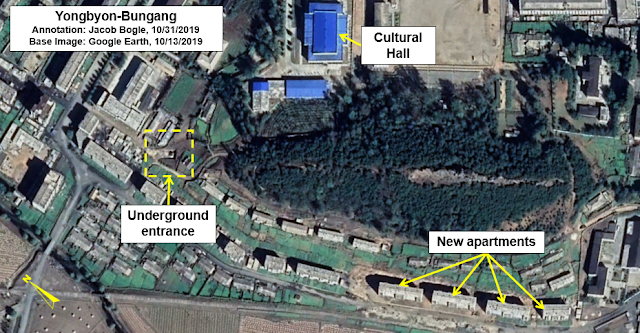 Construction of the noted underground site began in 2004 and is one of several within the complex.

Population growth has led to the need to build other, non-residential buildings. At least three have been added (or are currently under construction) and there may be a fourth under construction as well. One interesting note, as gas stations have proliferated at major cities across the country, one isn't visible in Yongbyon. There are plenty of reasons why that may be, but one could be because the average citizen can't leave or go trading as easily as people outside of Yongbyon, so the regime doesn't see a need to build a fueling site for passenger vehicles.

Yongbyon's sealed nature has likely created a situation where the regime's propaganda, cult of personality, information controls, and level of market activity have all been less subjected to change or challenge verses the rest of the country.

This next image shows changes to the primary administration and research zone. Multiple structures are in the process of being constructed and at least one appears to be undergoing some kind of renovation. I have also highlighted an addition to a research facility that was built in 2016. 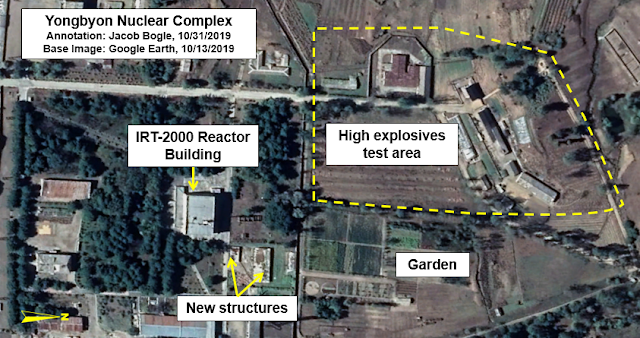 To the immediate north, two new structures can be seen next to the IRT-2000 research reactor building. The reactor was provided by the Soviet Union in 1965. The Soviets provided North Korea with a total of 42 kg of highly enriched uranium until 1990. Pyongyang has said that the reactor produces needed isotopes for medical research and treatments, but the reactor can also produce tritium for their weapon's program. By 2011, it was widely believed that the Soviet-supplied fuel had all been used. However, it is now suspected that the reactor is using domestically created fuel.

The garden has existed for many years and is part of the regime's mandate that military units, schools, factories, and pretty much everywhere else do their part to solve the country's food problem. The food could be eaten by those working there or it may be sold in markets to earn currency. Looking at all of Yongbyon, you'll find nearly every free space of land is being used for cultivation. If defector and witness reports are correct about major pollution, then any food grown here will also be contaminated. This echos problems seen at other nuclear-related facilities, such as the uranium mine and milling plant at Pyongsan.

The crane structure was first erected in 2011 as part of the construction of the experimental light water reactor. The long, angular structure could be warehouses or contain a conveyor system. This was noted by 38 North and shows that the changes began in 2017 and continued into 2018.

While there are questions about the current operational nature of the reactors, the area has been very well maintained, had new construction, and stands ready to resume work whenever the orders are given. 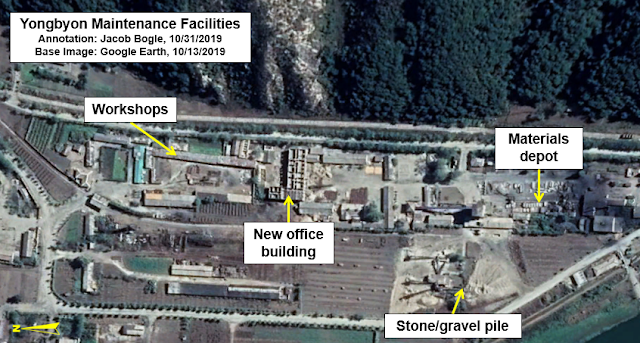 Between the reactor zone and the nuclear fuel production zone lies a facility for maintenance and supplies. A large new building is currently under construction there. Its size and the visible structures inside suggest that it is likely an administration building to coordinate various construction and maintenance activities around Yongbyon. 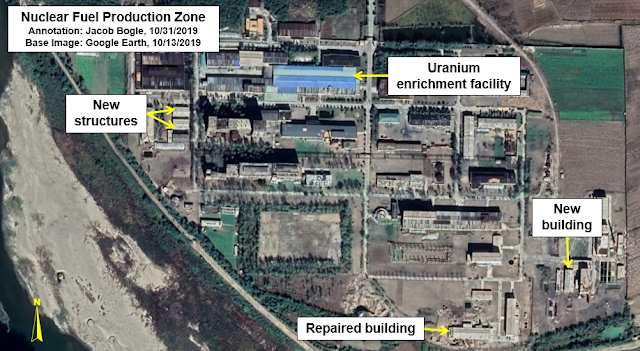 Two small buildings have been constructed next to the enrichment facility, a building has been added to the isotope facility (lower right), and a building that had long appeared to have been abandoned has been repaired/reconstructed.

The new building at the lower right was pointed out in a 2018 report by 38 North. 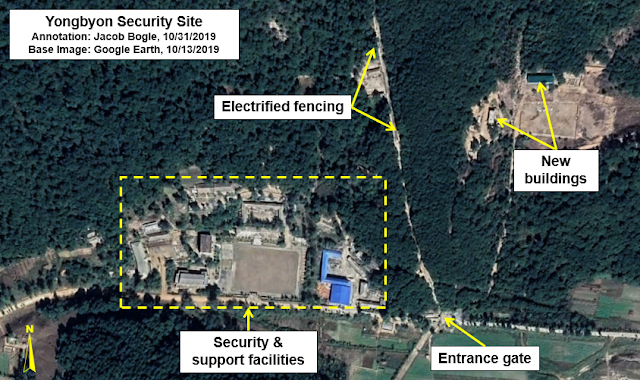 Lastly there is some construction work happening right outside of a main security compound to the east. Two buildings are currently under construction (space for a third exists but no foundation work has begun). I don't know if the site is directly related to Yongbyon but it is extremely close to the electrified fence that surrounds the complex and is next to a key entrance point.


Not only is it possible to see that many changes have happened since 2016 (which, of course there would have been), but we can see that there are structures currently and actively being built. All of this points to an active city with a growing population, improved research and production capabilities, and is substantial evidence that North Korea isn't giving up on their nuclear program anytime soon. The continued mining and milling of uranium at Pyongsan, the fact that almost every building along the 17-km stretch of Punggye-ri still stands, and new progress toward creating submarine-launched ballistic missiles paints a picture very different than the one promoted by various media and political outlets.


This report also speaks to the ongoing need for continuing updates to Google Earth and other freely accessible products that give access to satellite images of the globe. Buying enough commercial imagery to cover all of Yongbyon can run into the thousands of dollars and places restrictions on research. While commercial entities enable individuals and news and research organizations to look at very recent images of specific sites, which does provide immense value, it also places limits on more comprehensive research into larger areas and often means that a good deal of North Korea gets overlooked.
However, so long as Google Earth (and even general map providers like Bing) continue to provide the world with their services, the democratization of research can continue. Be it looking into North Korea, changes to the Amazon rain forest, new internment camps in China, or the agricultural outputs of France, the world relies on open access to information.